In order to cut to the chase on these books I will abandoned remarking on who the creators are all the time. I’m not trying to disrespect the creators as much as I just want to try and make some shorter remarks on a bunch of books and make it read a little faster. As I said in Part 1, I’m skipping books that were either just good or failed to incur my wrath, so in no particular order, onto the books. 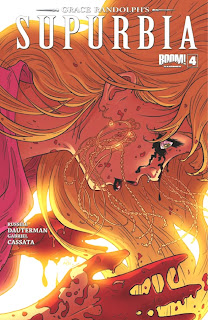 Grace Randolph’s Supurbia #4 was fun. It cracks me up that she has her name over the title because outside of her doing a video post on comics and writing this book I have no clue who she is. At least with Garth Ennis, James Patterson or Tom Clancy stamping their names on things is to garner sales, in her case I guess she is trying to build a brand name. Thinking it through it is actually has a good idea doing it this way. Desperate Housewives meets the JLA is how I see this book. It is more about the soap opera then it is about the heroics, a great change of pace book.

Fatale #12 by Ed Brubaker and Sean Phillips was a great one and done issue. See that, I break my own rules that I talked about already. I find rules to be suggested guidelines, so breaking them has never been an issue for me. This was a great one and done story talking about a prior Femme Fatale. Set in France in the 13th Century it was a well done story of this woman who is some sort of witch or demon. At the very least she is not human or mortal. It was a sad tales in many ways and you could not help but feel sorry for her. Fatale is a great series and it is Brubaker’s best work. The series becomes better and better the deeper we get into it as the scope of the book becomes larger. Yet for all of that I felt this book could have been read by anyone and you needed nothing to introduce the story. 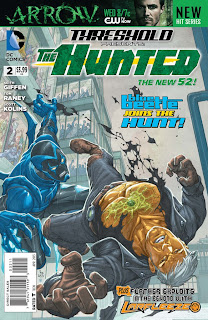 Threshold Presents The Hunted #2 has no chance of surviving. DC makes so many mistakes, but this book is a prime example. It is $4 a crack about a depowered Green Lantern stuck in a Running Man movie, so to speak. It has appearances by the latest DCU versions of the old space characters like the Star Rovers, Space Cabby and it even had Captain Carrot in this issue. It is fun for me, but I can’t see anyone else spending money on it. Add in Larfleeze as the backup story and you have the ultimate in “Z” list characters being given a book that has yet to show us what the point of the series is or who is the main character. In fact why is this book called Threshold?

Before Watchmen The Comedian #5 (of 6) was brutal. The Viet Nam war left a scar on the conscious of the USA like nothing else. When I was growing up the war was always something looming as I was possibly going to be drafted if the war had gone on much longer. It ended before it was an issue, but I had a draft card. This book shows some of the bad side of what happened in Viet Nam and shows the character of the Comedian as he takes to it like a duck to water. Great art by JG Jones rounds it out. I hate to see the BW stuff go and can only wonder what other projects these guys will all be doing. Sadly I do not see it being of regular DCU books.

Manhattan Projects #9 is insane and crazy and I have no clue why I keep buying this series. 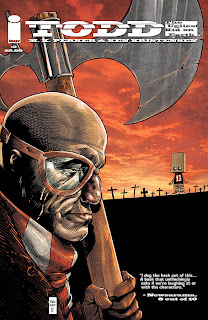 Todd The Ugliest Kid in the World #2 (of 4). This book is just flat out awesome. After the first issue I thought it would be more of straight comedy, but this issue was all about Todd being in jail and learning the ropes. I don’t know how to tell you how much is in each and every issue. It has tons of jokes about prison clichés, it has Todd’s Mom whoring around, his Dad celebrity worshiping, jokes about Scientology and soap in a prison shower along with Todd and the bag on his head. This book is pure joy and humor with a razor sharp edge. The artwork is great and I’m thinking a need to own a page of art from this book. The art has all the charm of the old Mad magazine work done by Wally Wood, Jack Davis and others.

The Walking Dead #107 was another excellent issue. The comic is so superior to the TV show. I felt like this book lost a little of its “je ne sais quoi” a couple years back, but it is rocking on all cylinders again.

Katana #1 was a pleasant surprise. I was all set to make this a one and done. Ann Nocenti crafted enough of a good start to keep me coming back for more. She skillfully told us enough about the origin of the character to establish who Katana is and also set up the plot points for the opening story arc. The artwork was interesting; I think it was shot directly from pencils. It is so hard to tell with computer tools available to artist, but the work is good. I’m still debating if I like his style or not.

The last book for this part is Uncanny X-Men #1. SPOILER ALERT. Magneto is a traitor and apparently cutting some deal with Shield to have them help him make Scott self destruct in public. First off, so we have flipped the characters so much that Magneto is looking to stop Scott. It is a testament to us, the comic reading public that basic characters traits that have been established for decades can be flipped and we buy off on it. For me, this is bullsh*t, if this is not a double cross by Magneto I call bullsh*t on it. Second, your plan is to have a super secret spy organization help you make Scott self destruct in public to somehow discredit him so you can help keep Xavier’s dream alive. Wow, does that plan suck. The book has beautiful Chris Bacalo artwork, so it is not all bad.