Lee: I am way behind in Previews. Oh well, never too late to catch up!
Thomm: ‘Course not. Why work ahead when you can ask me to get it done the same day you want it back. Lucky for you I’m not sick like I was on Tuesday. 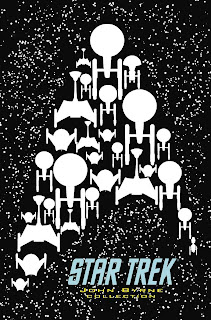 Star Trek: John Byrne Collection
John Byrne (w / a / c)
Comics legend John Byrne has taken on four Star Trek titles, all collected in this oversized hardcover collection. "Assignment Earth" recounts the adventures of interstellar agent Gary Seven, "Crew" recounts a tale from the very beginnings of the United Federation of Planets, "Leonard McCoy: Frontier Doctor" is a collection of tales from this famous member of the Frontier Medics Program, and mystery, intrigue, and war abound in "Romulans: Pawns of War." HC • FC • $49.99 • 320 pages • 7” x 11”
Lee: This is interesting because I am not sure I care about Byrne anymore, but I’ve heard lots and lots of good things about the Star Trek series he did. In particular, I remember hearing really good things about the McCoy miniseries. This is an expensive way to go but it could be worth it.
Thomm: I’m still a fan of Star Trek but haven’t been following anything Byrne’s done in a couple decades. I’ve never been as big a fan of Star Trek that wasn’t TV or movies, either. Too rich for me.

4 more below the break 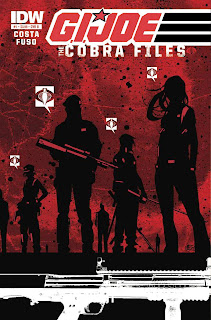 G.I. Joe: The Cobra Files #1
Mike Costa (w) • Antonio Fuso (a) • Michael Lark, Fuso (c)
A Snake In Their Midst! Her name is Chameleon—and she used to be a Cobra agent. Now she’s made her way into the G.I. JOE team—the honest way. But even with the best of intentions, does she have what it takes to fight on the side of the angels? Flint thinks she does, and he’s willing to gamble the lives of his teammates on her… Unfortunately, with the Crimson Twin called Tomax pulling the strings, no bet is a sure thing. FC • 32 pages • $3.99
Lee: So why do we have this series? Because the last Cobra series, with the exact same creative team, just ended which means this is no different than before. Having read the end of the last series I can tell you that Costa writes a good black ops action series, which is what this really is. I can also tell you that Fuso is a poor man’s Jock. To be precise, Fuso draws faces like Mignola draws feet… and that’s not a compliment.
Thomm: Well, I wasn’t interested in this in the first place. With this ringing endorsement from Lee I’m sure to skip. Hell, the description alone gives me a headache, what with its double and triple agent convolutions. 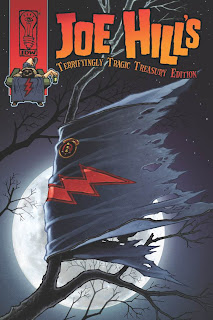 Joe Hill’s Terrifyingly Tragic Treasury Edition
Joe Hill, Jason Ciaramella (w) • Nat Jones, Seth Fisher, Langdon Foss, Zach Howard, Gabriel Rodriguez, Jay Fotos (a) • Gabriel Rodriguez (c)
Author Joe Hill is much more than just the Eisner-winning creator of Locke and Key! As this oversized extravaganza shows, his mind is twisted in all kinds of clever and disturbing ways. Contained herein is his one-shot “Kodiak,” Seth Fisher’s final work in “Freddie Wertham Goes to Hell,” the original Eisner-nominated one-shot “The Cape,” and the award-winning Locke and Key short “Open the Moon.” Come for the insane writings, stay for the beautiful art reproduce at Treasury-sized proportions! FC • Cardstock • $9.99 • 72 pages • 9.25” x 14.25”
Lee: This is huge! And normally I would pass but a collection of Seth Fisher’s last published work makes this a buy. Fisher was an incredible artist and I can’t recommend his stuff enough. Besides that, I’ve heard the Cape one-shot was good too. Sadly, even though I will like Fisher’s art full size, I wish the book itself were smaller. It’s too hard to store when it’s this big.
Thomm: I like the fact that Joe Hill is behind it. Locke and Key is great, after all. As you say, it’s a bit awkward in size, though. 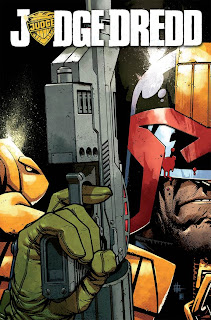 Judge Dredd, Vol. 1
Duane Swierczynski (w) • Nelson Daniel, Paul Gulacy, Brendan McCarthy, Langdon Foss / Inaki Miranda (a) • Zach Howard (c)
In the 22nd century, crime runs rampant in Mega-City One, home to over 400 million citizens, robots, criminals, and lunatics. The only line of defense between anarchy and chaos are… the Judges. And Judge Dredd is the toughest of them all. IDW is proud to re-introduce Judge Dredd to America in this new series. TPB • FC • $19.99 • 124 pages
Lee: In case you skipped the single issues (Thomm!) now you can catch up with the trade. This has been really well done and the art has been fantastic too.
Thomm: I read the blurb kind of quickly and saw “crime nuns rampant”. Now that would be interesting. If I see this on sale, I’ll consider it, but the whole Judge Dredd concept has never been appealing to me. 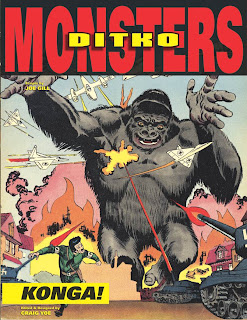 Steve Ditko's Monsters, Vol. 2: Konga
Joe Gill (w) • Steve Ditko (a / c)
The genius artist Steve Ditko is a towering monster of awesomeness… and so is the character he chronicled…. KONGA! If you love King Kong–and who doesn't–you'll love Konga! Konga battles dinosaurs, mole men, undersea monsters, creatures from beyond space, and the evilest threat of all... the human race! This is the complete Ditko Konga, a whopping 328 pages of giant purple ape comics, including eight pulse-pounding covers, all drawn during the height of Ditko's prowess concurrent with his creative explosion at Marvel. Includes scripts by the fan-favorite writer Joe Gill and an introduction by Eisner award-winner Craig Yoe! Every page is lovingly restored and the book is a large-format hardcover to showcase the monstrous Ditko art. By the same folks who brought you the acclaimed “The Art of Ditko” and “The Creativity of Ditko.” HC • FC • $34.99 • 328 pages • 8.5” x 11”
Lee: This is by far a “if you have money” book! Having read these stories I can tell you they are bad. But not awful bad… more like Ed Wood bad. And that is a compliment. Heck, the cover alone has a giant monkey fighting Nazi’s. The art is amazing and you will laugh your ass off at the stories.
Thomm: Grape Ape! Grape Ape! It’s Saturday morning cartoons… Wait, that isn’t this? Ah, well. Jim should love it.

Thomm: Surprisingly, the John Byrne Star Trek is the most appealing in this lot, mostly because of the size on the Joe Hill book. IDW’s pickings seem a little slim this month.
Lee:  There were some other books but nothing that super appealed to me which made for a slim month.  All the little series are mid stream and everything else is  license product... which you either love or hate.  I'm sure next month will be better.