Number Ones – Will I Still Love You Tomorrow? The Week of February 20 in Review Part 2 of 4

The comic companies are addicted to rolling out new series and I as a fan love trying out new books. Of course it has to have certain qualities to make me decide to take out a new book for a trial run. 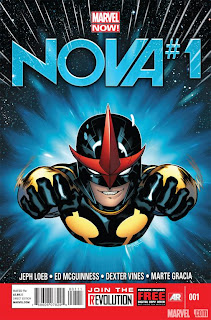 Nova #1 by Jeph Loeb and Ed McGuiness is by all rights a book I should have passed on. Instead I decided to try it out. The first reason is because of all the drumming up of the “Cosmic Event” Marvel is brewing in hopes of riding the coattails of the “Guardians of the Galaxy” movie that is forthcoming. The second reason is that I had enjoyed the last Nova (Richard Ryder) and wanted to see why they were moving to a Kid Nova idea. Those factors were fighting against my dislike of anything by Jeph Loeb in the last decade and my dislike for the almost cartoon like quality of Ed McGuiness work. I’m not sure what it is about his style that I don’t like, but his Superman/Batman work was off-putting. I’m glad I tried it out. It was a nice story that gave as a connection to the kid and the Nova Corps. It showed us the Sam Alexander is a good kid and very responsible for his age. I now want to read the story and find out how Sam is going to end up being a Nova. The downside is that it feels like a typical decompressed story meaning I will have to pay $24 to get the first story arc and origin of the character. The AR sucked. The other problem is McGuiness portrayal of him makes him seem very young, yet he is in high school. I know based on the way they laid the timeline out Sam should be 17. At times he appears to be more like 12. 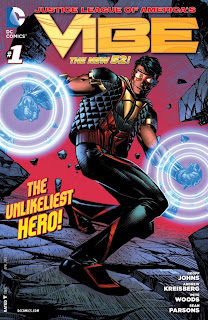 Next up is Vibe #1 by Geoff Johns and Andrew Kreisberg as writers and Pete Wood on pencils. The first reason to buy this is the hype from DC that this character is going to be an important element in the new DCU. Second my odd fondness for the old JLA Detroit characters. Those JLA days were pretty bad and I re-read the material not long ago and it was worse than I remembered it to be, but I still have a love for that oddball group. Third was to see if Johns has any chops left in him to build up a lame character into a rising star for DC. I’m glad I got this book. In one issue we got a solid origin for the character, had him in a major battle using his powers and got to see a reason why he is important in the new DCU. Whether this book holds my interest long term is an open question but it was a very good first issue. 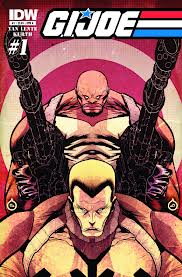 GI Joe #1 by Fred Van Lente and Steve Kurth is up next. The reason to try this book is it is a soft re-set of the GI Joe Universe and a possible jumping on point. Second I have enjoyed the Cobra series and wanted to see if GI Joe had anything to offer me of interest. Third, Fred Van Lente has proven himself to be a capable writer and I figured I should check it out. Well at least I tried it. The GI Joes are now going public and their missions are out in the open. The book fell flat for me. The premise was stupid, that the US would have such an organization so public. The mission was over the top as some small town in the US was taken over by Cobra. The team was so pathetic they are shot down before even getting to land the plane. I will give kudos for artist Steve Kurth whose odd poses by his characters was almost invisible until the last page. GI Joe is not for me. 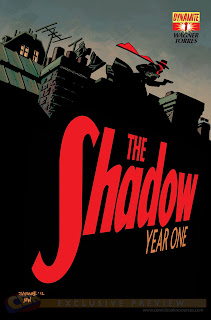 The next number one is The Shadow Year One #1 by Matt Wagner and Wilfredo Torres. The reasons for trying this out are Matt Wagner. I love Matt Wagner’s work and if he is not doing the art, I still love his writing. The second reason is I enjoy the Shadow at times. I usually get bored with the Shadow because of the sameness of the stories, but in general the character is appealing. This is a borderline keeper. I was hoping for more of an origin of how the Shadow came to be, but instead we are getting his first adventure as the Shadow in New York. The art work is weak. It feels like it lacks any weight to the work and I believe this book calls for an artist that can put more realism into the pictures. At least with Wagner I’m assuming he is giving direction on how the artist should tell the story so the story telling seems decent. If this goes on longer than six issues I’m not sure I can hang onto the series, but I will try the second issue. 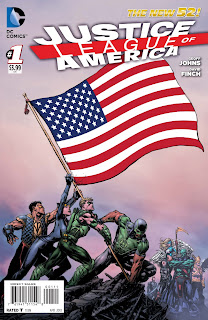 Next is Justice League America #1 by Geoff Johns and David Finch. The reasons for trying it are DC’s is pushing it a major title in the DCU. Next the lineup of characters is interesting. Third is David Finch’s artwork. Fourth is to see the premise. No longer is Geoff Johns an element in my decision making. Johns is almost a neutral to a negative in my decision making. Johns always gets top flight artist and the biggest marketing push, so his sales success is no longer due to it being a Geoff Johns written book. The nature of this business is that if you become a star writer the company invests heavily in what they have you doing and your stardom is guaranteed to last a lot of years until your name drives customers away in droves. The premise is interesting, it is a government sponsored group that is putting together a team to help protect America and at the same time be a failsafe in case the Justice League needs to be put down. The art was great, but it was a talky story giving us a lot of background to introduce the characters and set up the premise.  I liked it and will be back. The stupid part was having Green Arrow die at the end of the issue. This tired old comic book cliché needs to be put to rest for about a decade. Are we are really suppose to believe a character with a new re-launch under Lemire and one that has a TV show on the air is going to be dead, ugh. 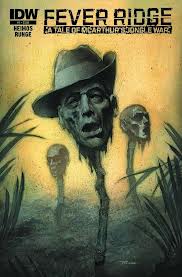 The last number one is Fever Ridge A Tale of MacArthur’s Jungle War by Michael Heimos and Nick Runge. The reasons to buy are simple it is a war story and based on history. I enjoy learning history and all sorts of things with comic books. It usually spurs me to read more on my own. I had no clue about the creators, but I trust that IDW tries to deliver a professional book. I’m on this mini-series for the entire run. The first issue was interesting and I’m very curious about this part of WWII. MacArthur was a fascinating person and the Pacific theatre has always gotten less play then the European front. By the end of the book I was hooked into the story. The downside was the structure was odd. The first half was about a US Army desert training camp. We meet a few soldiers and they are shipped off to Hawaii for training in jungle warfare. Then we jumped into the actual Jungle War. The transition was so fast that when we are in the jungle I’m not sure who is who anymore. Also the ending of this first issue was a little ambiguous. Did they kill the Japanese sniper or not. No matter, if you like war stories this one is a keeper and the writer is giving us a ton of historical bits of information. As an example one small thing is he mentions how the Japanese snipers were often chained to the trees. It gives you a whole new look on how the common Japanese soldier was being treated.