After all the feel-goody-ness of Supergirl, I decided to see what else DC had on the stands in the early 90's.  Low and behold I found the forgotten classic, Eclipso!  Growing out of the Eclipso: The Darkness Within mega crossover event in the summer of 1992 this was DCs attempt at creating a series staring a villain.  Basically,Eclipso takes over Parador, a tiny South American country and wants to use drugs to finance an army to take over the world. 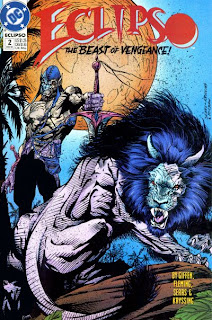 Eclipso #2, December 1992
Pencils: Bart Sears
Inks: Ray Kryssing
Normally, I would show the first issue cover but this one was better.  Bart Sears was at the peak of his powers and rendered a cover that was just incredible.


This series went on to have not only a huge bodycount but some unbelievably bloody covers.  You've been warned. 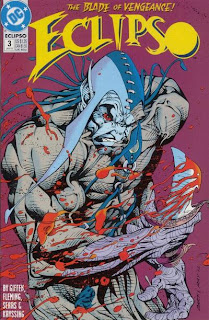 Eclipso #3, January 1993
Pencils: Bart Sears
Inks: Ray Kryssing
Issue 3 starts the blood flowing and it won't stop until the series does.  I think this sets the tone nicely with a giant bloody knife.  Looking back, I am surprised at how violent this really is. 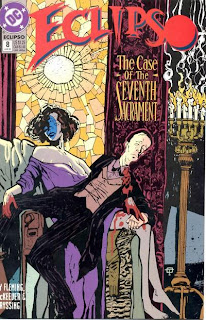 Eclipso #8, June 1993
Pencils/Inks: Ted McKeever
By this point, Bart Sears left DC all together and went over to Valiant to restart the Turok series.  McKeever comes in and does a great job with the Michelangelo Pietà homage... more blood too! 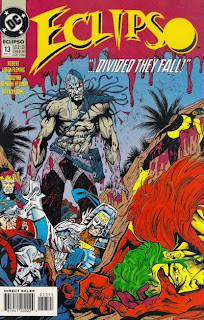 Eclipso #13, Novemeber 1993
Pencils: Audwynn Jermaine Newman
Inks: Ray Kryssing
And the issue that took everyone by surprise.  In one of the best kept secrets, Eclipso slaughters the heroes sent to capture him.  This issue quickly sold out because no one was prepared.  THEY KILLED THE CREEPER gosh darn it!!!

At the time it was amazing, sadly death is not permanent and the story has since been rendered pointless.  But for one fleeting winter, it was cool. 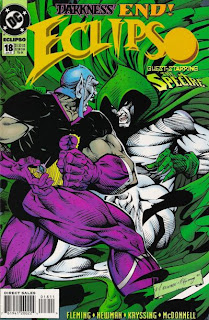 For those keeping track, the new artist is Newman.  He did his best Sears impression for the cover of 16, but here he tries to get more of his own style.  If I didn't love the Spectre I would call it a clear miss.   It is a fun cover no matter how misproportioned the heroes are.


That's about as much blood and guts as I can take for a Sunday.  Now go out and enjoy yourself.
Posted by Lee at Sunday, February 17, 2013