12 Reasons Why I Love Her OGN – A Review 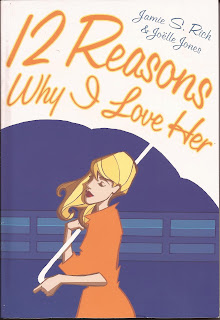 
Boy, my local comic shop’s weekly whiz bang has been impossible to resist lately and I’ve purchased three trades in the last two weeks at 40 to 50% off.  It’s funny how different books jump out at you as the long boxes get less full.  What drew my eye this past Wednesday, I didn’t even notice last week.  I guess it’s the romantic in me, but I couldn’t resist picking up the OGN, 12 Reasons Why I Love Her.  I nearly devoured the whole thing in one reading and I guess you could describe it as a cross between When Harry Met Sally and Pulp Fiction (only without the violence).

If you’re one of the blessed people in this world (like me) who fell in love with their best friend and married them (versus falling in love with a person who becomes your best friend – still a good deal), then you probably know that Rob Reiner’s excellent 1989 film, When Harry Met Sally, starring Billy Crystal and Meg Ryan, is the epitome of modern romance movies.  I guess 1989 WAS a little while ago, so “modern” might be stretching things nowadays, but I’ve always loved the realistic dialogue between the characters and their progression through the years from strangers, to acquaintances, to friends, and finally to lovers.  This is all deftly accomplished linearly through small vignettes, which often have large spans of time in-between them. 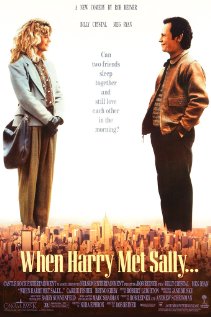 Quentin Tarantino’s 1994 cult classic, Pulp Fiction, was also told with little small scenes, but instead of a start to finish story, it was all presented in non-sequential order.  I only remember seeing that film once, but despite the over-the-top violence in places, there are some wonderful character moments between John Travolta and Samuel L. Jackson where they’re just talking to each other as they go through their daily curse-word filled lives.  I don’t recall there being any sort of romance in the film, other than a cool dance scene.


12 Reasons Why I Love Her combines elements of both movies to depict the engaging story of Gwen and Evan.  We have the realistic dialogue between two people falling in love, but told out of order in 12 (13 if you count the preface) beautifully rendered black and white snap-shots.  Near as I can tell, the book covers the first one to two years of their relationship.  I think there are enough clues to put the story in the proper order, which I’m anxious to do, but I suppose the intent was partially to depict the randomness of memory.  (When we recall our own relationships, we don’t usually think about them from A to B, but instead focus on important moments whenever the mood strikes us.)  The approach is effectively used here, but for me the impact of the romance was somewhat lessened due to the uncertainty of what’s happening when.


The stories themselves are of varying length and each chapter starts with a song title that I suppose would really go well with the scene.  Many are the “getting to know you” type conversations, but we also have a dream sequence, a childhood flashback, and an ode to the seasons – in different art styles when appropriate. These build on one another, so that in later scenes you understand more of what they’re saying.   Their relationship isn’t all sunshine and roses.  It starts off rocky and really reaches a crisis point soon after their first anniversary due to the return of a previous boyfriend, when Gwen is trying to decide between the two guys.  That part (chapter eleven) is a really intense sequence.


The characters are likeable and believable, but you never quite get to completely “know” them.  You have a good sense of who they are, but it’s incomplete – a little vague.  Gwen is carrying some serious baggage due to her parents’ divorce and strict (I’d venture to say legalistic) religious upbringing.  A lot of this comes out in chapter five, where an elderly woman chastises her for watching the Exorcist.


As an evangelical Christian, I agree with her general message, but not her methods.  We’re supposed to “speak the truth in love”, not in a condescending manner.  Of course, the message itself by nature can be potentially abrasive, because it presents an absolute that can challenge people.  Despite a flurry of F-words (and I really thought I had screened this book well enough beforehand that there weren’t any), that aspect isn’t completely ignored, when Gwen admits, “I was mad that she felt I needed to hear her opinion.”   It’s an interesting conversation.  I don’t necessarily like what the characters are saying here, but I can’t deny how genuine it is.


The art by Joëlle Jones is simply amazing.  The use of blacks is powerful and the expressions are wonderful.  I was so eager to get to the end of the story that I really need to take time dwell on the art in more detail.  In fact the whole book, I think, has more layers that are begging to be explored.  I’m just getting down my first impressions here, just getting to know the work.  But I look forward rereading it again in the near future.  What can I say? In this day of “read it and forget it” comics (not all, but some), that’s high praise indeed.


One tip:  Take the first scene as the most recent one.
Posted by Matthew at Saturday, March 10, 2012