Image Previews For May

Lee: Image has been releasing a lot of good titles recently and people are really starting to notice. Now I wonder if they can keep it up. This month they are releasing a stack of new #1’s so we shall see.
Thomm: I’m mostly on their existing offerings, but I did just start with Saga, which, after 1 issue, looks good. 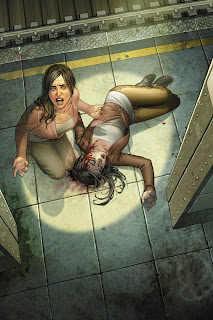 MIND THE GAP #1
story Jim McCann
art / cover Rodin Esquejo / Sonia Oback
variant cover Rodin Esquejo / Sonia Oback
48 PAGES / FC / $2.99
After Elle Peterssen is mysteriously attacked on a Manhattan subway platform, she is left in a coma, the only clues to her attacker trapped inside her mind. No one knows the identity of the person behind this brutal beating or where they will strike next. In this All-New Ongoing series, everyone is suspect, and no one is innocent. Eisner-winning writer Jim McCann joins Rodin Esquejo (Morning Glories) and Sonia Oback (S.H.I.E.L.D., The Defenders) unite for a psychological thriller that will leave you guessing at every turn!
Lee: This is interesting because it’s certainly outside of the norm. Nary a cape, cowl, or even monster to be seen anywhere. I am not sure that I am sold but an oversized first issue for the same price will at least get me to look.
Thomm: Good premise, outside the usual box of comics topics. Not quite noir, not quite police procedural. Really, interesting to see where it goes.

Five more below the jump. 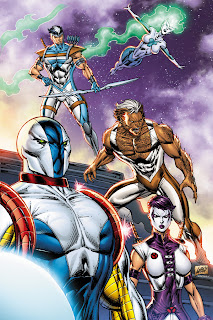 YOUNGBLOOD #71
story John McLaughlin  art Jon Malin / Rob Liefeld
cover Rob Liefeld   variant cover Ryan Ottley
32 Pages / FC / $2.99
It’s the 20th anniversary of the comic book that launched the Image Revolution in 1992! Rob Liefeld’s Youngblood returns bigger and better than ever with an all-new look at the next generation of superheroes, courtesy of screenwriter John McLaughlin (Black Swan, Parker), up-and-coming artist Jon Malin and Youngblood creator and Image founder Rob Liefeld!
In this first issue, a young reporter is embedded in the Youngblood team. Her assignment is to gather enough information for a humiliating puff piece, but she quickly discovers Shaft, Vogue, Lady Photon, Die Hard and Cougar are a team to be reckoned with. Badrock would be part of the group too... if he wasn't in a coma with wounds that have nearly pulverized his otherwise rock-hard hide.
Lee: And why is this being released? Isn’t this the 3rd or 4th time Youngblood has crashed and burned? I’m sorry but I’m thinking it’s time to let this property go.
Thomm: Aren’t the terms “humiliating puff piece” oxymoronic? A puff piece has no substance, so how’s it humiliating? DANCER #1
story Nathan Edmondson
art / cover Nic Klein
32 Pages / FC / $3.50
"Ouverture" Retired assassin Alan Fisher and his ballerina companion must escape a ruthless sniper who stalks them through the streets of Milan. To survive and protect the love of his life, Alan will unravel the tapestry of the past he's kept hidden and discover the killer's impossible identity. From the writer of Who Is Jake Ellis? and the artist of Viking comes a spy thriller with a 21st Century twist.
Lee: This appears to be a standard spy type thriller. Although I like Klein’s art, there isn’t enough of a hook to really sell me on this one. Maybe if it was an over sized first issue.
Thomm: Why’s he have to unravel his own past? Just ‘cause he’s hidden it from others doesn’t mean he doesn’t know his own past. Seems like it wants to be an international version of Burn Notice but is missing the appeal of that show.

EPIC KILL #1
story / art / cover Raffaele Ienco
32 Pages / FC / $2.99
Hitmen and mercenaries from around the globe are ordered by the President to bring down an eighteen-year-old super assassin named Song -- but she’s going to turn the tables on them -- and every kill is going to be epic!
Song has trained for years into adulthood to take revenge on the man responsible for her parents’ deaths -- the man who has just been elected President!
Lee: Oddly enough this appears to be nothing more than pointless killing and violence. Maybe they should have called it “Epic Bloodbath.” Oddly, since my only expectation is lots and lots of violence I’m kinda interested.
Thomm: Kill Bill meets the comics. 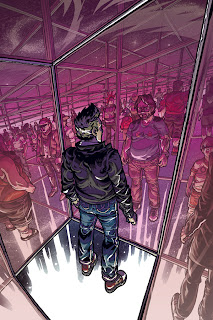 GRIM LEAPER #1 (OF 4)
story Kurtis J. Wiebe
art /cover Aluisio Santos
32 Pages / FC / $3.50
A brand new series from the mind of critically acclaimed writer Kurtis J. Wiebe (Green Wake, Peter Panzerfaust), Grim Leaper is a gory romantic comedy. Lou Collins is caught in a cyclical curse of violent, gruesome deaths and new beginnings in the bodies of strangers. With no clue why, Lou desperately searches for a way to break the curse and cross over peacefully to the other side. Then equally doomed Ella comes along. It’s a love story to die for.
Lee: Now this has piqued my interest. Sounds a little like Daytripper without any of the high concepts. It could be fun.
Thomm: Reminds me of Resurrection Man a bit, with the rebirths, but the use of other people’s bodies is a different twist. Something worth checking. 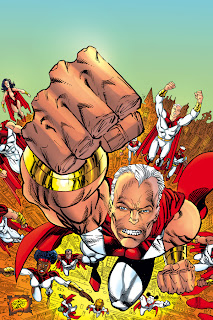 SUPREME #64
story Erik Larsen
art Erik Larsen / Cory Hamscher
cover Erik Larsen
32 Pages / FC / $2.99
“Storming Heaven” Following Alan Moore’s final Supreme tale, legendary writer/artist Erik Larsen takes up where he left off. Supreme’s most hated nemesis, Darius Dax, has rallied a thousand versions of himself to face the Ivory Icon! Against such odds, Supreme turns to the Supremacy for aid – and ultimately the deadliest Supreme of them all! Is the world ready for the return of Rob Liefeld’s Supreme? A shocker!
Lee: Last month, someone dug up the last Alan Moore Supreme story and sold that. So this is actually the first issue of the new ongoing. I don’t really care about Liefeld but I bet that Larsen can turn in a pretty good Superma… Supreme story. Heck, it’s still cheaper than most Marvel books so why not take a chance.
Thomm: This is reminding me of Invincible when Angstrom Levy gathered all the evil versions of Invincible from numerous dimensions. I think I’ll pass on this iteration.

Lee: The new books seem to be more miss than hit but they are worth looking into.
Thomm: Mind the Gap is easily the most interesting possibility. Good deal on price, too.
Posted by Lee at Tuesday, March 27, 2012