John Carter Fail and What’s Wrong With The Big Two

The idea of any sort of week in review is a distant memory and perhaps is a faint hope for the future. Instead I’m going more with more of the impressions from comics and in this case related fields that occurred to me during the week. Saturday follower blogger and my daughter, Gwen, went to see John Carter along with Andre, her husband. All three of us had read the book Princess of Mars, myself many times and Gwen innumerable times. When Gwen and Jamie (my daughter, also) were younger I would often read to them. Everything from children’s books, comic books, made up plays with their stuffed animals and what we would call a chapter book. The one book I remember vividly reading to them was Princess of Mars by Edgar Rice Burroughs. More famously know for Tarzan, but the first three Mars books are perhaps his best work. John Carter is an immortal warrior, who does not even remember his origins and after mysteriously being whisked away to Mars finds his one and only true love in a war torn world of Mars. A planet inhabited by many fantastic races and one fighting over limited resources. John Carter is a man who is an honorable warrior. He does not fear death and will kill people if the situation calls for it, but he is honorable and a trustworthy friend and a fearsome enemy. The Princess of Mars is a family favorite so to hear a big budget picture was being made caused great anticipation. 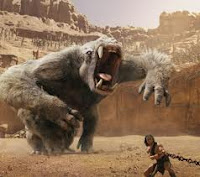 As the movie grew closer the title was made into John Carter (JC, hmmm Disney marketing??) and bits and pieces of what was going on escaped. Hope gave way to a sense of dread. Seeing the movie confirmed the dread and destroyed the hope. I understand going from book to any other medium requires adaptations, some story changes and often updating an older work to a modern audience. I try to go in and see the movie for what it is and not for what it is not, but this movie failed on many, many levels.
﻿﻿ ﻿﻿
Let’s talk about the good things first, Woola was well done and served the purpose of being John Carter’s faithful companion and monstrous dog. Kantos Kan had the right sense of chivalry and derring-do about him. Dejah Thoris was beautiful. John Carter had a fighting sprit and the never say die attitude. In order to allow John Carter to communicate the new idea of a serum that allowed him to understand everyone was fine as the telepathy type stuff from the book would not have translated. The rest of the movie was a total WTF experience. John Carter was given a family that was killed either during the Civil War or soon after. A wife and daughter killed while he was away from home. This caused him understandable great angst and also made him no longer want to fight anyone for any reason. He just wanted to strike it rich and that was it. Instead of the heroic honorable warrior, he is the reluctant warrior being forced kicking and screaming every step of the way. Dejah Thoris is a great warrior in the movie, which was a good add, she is also a great scientist and inventor, which was too much. The central bad guys the Therns were totally made over into some sort of cosmic menace. They are a race that watch worlds rise and fall, why is never explained. Why they are engineering events on Mars is never explained. Much of the movie plot made no sense. Like comic books it went for cool moments, of which there are a few, and left logic, plot and the source material lost forever on the cutting room floor or in script rewrites. The Star Wars riffs were all over the place.
For bringing a beloved classic to life on the big screen I don’t hate the movie, for lobotomizing the heart of the book I do hate the movie. Bottom line this is a fail.
As for the big two, when I become bored with my comics from DC and Marvel I often think that it is me. This time I sense the malaise across a broader spectrum. Gwen, Jamie, Lee, Thomm. Matthew and Greg all seem to share the lack of excitement with comics from the big two. A book or two may still resonate with each of us, but for various reasons we all find more excitement in Vertigo, Indies, books targeted for younger readers, original art or political discourse. Since the age spectrum is from 14 for Greg to 44 for me, it is obviously not just me. 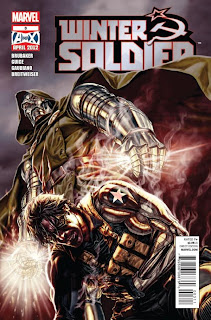 This morning I read Winter Soldier #3. Written by Ed Brubaker and art by Butch Guice (who I need to get a page of his work) a story steeped in espionage, which is in the noir wheelhouse of both of these creators. It was a good read and enjoyable for the most part. I was also yawning at times and shocked by how deeply it is entrenched in Marvel history causing us to have page after page trying to explain the plot. It has the history of the Winter (Bucky Barnes) Soldier, Doctor Doom, Nick Fury, Black Widow, Red Ghost and his super apes and Lucia Von Bardas. Are you kidding me? How the heck can even a casual Marvel comic fan keep up? The Marvel books are often so entrenched in minutiae that they are destroying the flow of telling a story. You are not telling a story of Bucky Barnes life, you are telling us another chapter in Marvel history. The thrill of the cross and double cross and intrigue are somewhat loss in having to know forty years of history. Heck trying to remember just of all the US history is hard enough add in three or four imaginary universes and it gets worse.
DC has the exact opposite problem right now. They hit the reset button so hard that I no longer have any affinity with any of the characters. Sure we could find another Jim, Gwen, Lee, Thomm, Matthew and Greg to write this blog, but is having the same name all you need to be a fan of something? I don’t think so. Maybe after five plus years you get tired of the same voice telling the same stuff, so new blood is always good and on the blog we try to change things up every once in a while. Heck we have been doing this blog for fun for years and decided to add some ads on a trial basis. If it makes us some money great, more likely in 90 days the $6 bucks that we have to split will not be worth the loss of aesthetic value of the blog and we will dump it. Bottom line, change is good and the natural process, plowing it under to try again, not always the right thing.

Using Scalped as an example of what many of us like, you have a story being told. It is self contained with a defined cast of characters. If Dash gets shot, in the next issue he is dealing with its repercussions and it has an endpoint.

That concludes this week from the gulf coast of Florida, where they may force me to consider wearing shorts.