Programming Note: I'm the Thursday guy now. Yesterday being Wednesday and the last day of the month, there's no chance of The List getting done for today. Tune in at this time next week.

Time for another visit to the Baltimore County Public Library, Reisterstown Branch. I'm still reading too many to do these things individually again, but rather than the random order of the last mega post, I'm going to work on an order of preference this time. We do love lists, after all.

Moving Pictures is by Kathryn and Stuart Immonen. I've seen their names throughout the years but couldn't tell you anything else they worked on. Still, it had a nice, intriguing cover. Sometimes that works. This was a wonderful story. The protagonist is a young American woman in Paris, working at the Louvre when the Germans invade in 1940. She's helping to hide art from the Germans but at the same time enters a relationship with the German in charge of cataloging the art. Torn allegiances or simple dalliances? It has the heavy atmosphere of the Nazi occupation but a lot of light moments, too. Her relationship with another American woman of considerably less nerve, and her more playful relationship with a Frenchman with whom she's working, add depth to the story. This was an excellent find.

Finder: Voice, on the other hand, is a little less of a find. I have read a few things by C

arla Speed McNeil, mostly in the pages of Dark Horse Presents. I gather that Finder is her major work, published initially on line. Reading Voice, it feels like a story set in a larger sci-fi universe that McNeil has created, but I felt like I might be missing some nuances because I hadn't read the prior stories. The story in Voice reads like a debauched French royal court set in a sci-fi world. Various houses of superior and inferior lineage populate this world, with those who have no membership in one of the houses doomed to a life of low level drudgery. The hero of the story is a young woman seeking entry into one of the top houses, to which her mother belongs. It's not gauranteed by lineage. Applicants have to make a cut, which, in the case of this house, means a sort of beauty pagent. There's also a ring that's been passed down for generations that's somehow necessary. That ring goes missing and a lot of the story is about her search for it. I can't say I understood everything that was going on. I think a number of the characters have appeared in other stories and have a background and interaction history that I don't know. I doesn't help that there's a sexual neutrality tendency to the house the hero is trying to enter. Male and female gets lost at times. 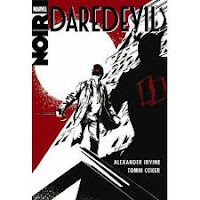 Daredevil: Noir was a selection based on hype from other readers and my own enjoyment of the Miller and Mazzucchelli eras on Daredevil. It didn't disappoint. Considering how noir those Miller and Mazzucchelli stories were, it didn't take much to re-work Daredevil into a Depression era tale. I was surprised by how much I liked that the ninja aspects of Daredevil were left aside. Obviously, ninja wasn't a well known quantity in Depression era NYC, so that makes sense, but I'd been so used to that in modern Daredevil, I was quite interested in how Daredevil's story would be shaped without it. No radiation, either, in Murdock getting his super human abilities. I was less enchanted with the somewhat obvious turn in changing Bullseye and didn't believe for an instant in Murdock's professed love of a woman who walked into Foggy's office. It was a trope of the old noir stories that the PI would fall for the dangerous dame, but most of those stories were built on initial lust that might turn to love as the relationship developed. Murdock's supposed to have skipped lust and jumped right to love, I know not why.

Then there's Batman: Hush. I've seen and heard people slamming this story for

quite a while. I read the Detective Comics Hush story where Tommy masquerades as the apparently dead Bruce Wayne. Those stories were ok, but nothing to write home about. I figured I'd subject myself to the original stories to see if that made the Detective stories any more illuminating. Having read this story, I don't discern the need to add Tommy to Bruce's origin story. Was the yin/yang really necessary? Do we need a story about a guy who had wealthy parents and was friends with Bruce as a kid, but instead of worshipping his parents and being deeply upset when they are killed by a robber, hates his parents and tries to kill them? It's heavy handed. Worse, other than that basic outline, I can't remember anything about the story, a month after having read it. Definitely could have been bettter. Didn't add anything to the later Hush stories, either. Those could have happened entirely in isolation from this story.

And now the low end of the bunch. Every now and then I read something from Garth Ennis. I don't know why. Maybe it's the infrequency. I must be so good at putting the last thing I read out of my mind that I try again. This is how I ended up reading Crossed. All I got out of it was a lesser The Walking Dead. Instead of dead returned to life, the living are transformed into pychopaths interested in nothing but killing and raping. They start with those who aren't crossed but move onto others who are crossed if they run out of uncrossed (noncrossed?). Like The Walking Dead, the ragged survivors are on the run and many fall prey. Ennis amps the violence, which is a neat trick considering what goes on in The Walking Dead, but also amps the sex. Ok, not really sex. He amps the rape. Plenty of that. No sex between consenting adults. At least zombies don't rape. All they do is kill. This book is so derivative that one of the survivors in their midst turns out to be a serial killer. Hell, look at that cover. It even apes The Walking Dead's trade covers. Just goes to show, having color in the story doesn't necessarily make it better. I'll take the black and white The Walking Dead over Crossed any day.
Posted by Thomm at Thursday, March 01, 2012