Dark Horse Previews for May

Lee: Wheee, after a drought where there wasn’t much appealing from DH they are on fire again. The past few months are great and I am expecting more of the same.
Thomm: Like a kid in a candy store, this one. 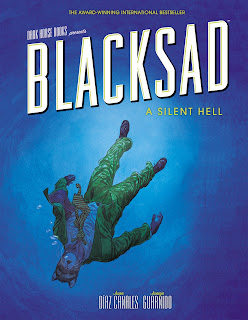 BLACKSAD: A SILENT HELL HC
Juan Díaz Canales (W) and Juanjo Guarnido (A/Cover)
FC, 96 pages, $19.99, 8 3/8" x 10 7/8"
Detective John Blacksad returns, with a new case that takes him to a 1950s New Orleans filled with hot jazz and cold-blooded murder! Hired to discover the fate of a celebrated pianist, Blacksad finds his most dangerous mystery yet in the midst of drugs, voodoo, the rollicking atmosphere of Mardi Gras, and the dark underbelly that it hides! Features an extensive making-of section, with tons of prelim sketches and watercolor studies.  2011 Eisner and Harvey Award-winner!  Read a review of the first album here.
Lee: I loved the first Blacksad album so I am really excited about this. It looks awesome… again. Actually, I already know it’s awesome because I saw this material when I was in France. I couldn’t read it all but the pictures are just as pretty as they were last time.
Thomm: I’m not at all familiar with the work but it looks really good. Noir’s a great starting point.

More books below the break 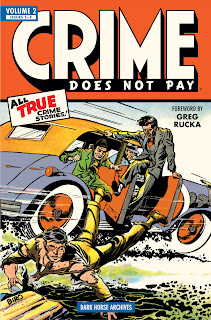 CRIME DOES NOT PAY ARCHIVES VOLUME 2 HC
Various (W/A)
FC, 264 pages, $49.99
The celebrated pre-Code Crime Does Not Pay comics are finally collected into a series of unflinching and uncensored deluxe hardcovers! The infamous Crime Does Not Pay stories, focusing on criminal scum, nefarious mobsters, and urban legends, made Crime Does Not Pay one of the most popular comics of the 1940s. This series was a favorite target of censors and is partially responsible for the creation of the stifling Comics Code Authority! Revered, influential, and very hard to find, Crime Does Not Pay issues #26 to #29 are collected for your enjoyment and education!
Lee: This is such a hard book to love. I got the tpb collecting some of the stories and loved it. I even ordered Vol 1… but it hasn’t come out yet. I am hard pressed to order another expensive hc without even seeing the first one.
Thomm: I’m hard pressed to pay $50 for 4 issues of a comic, no matter how historically important or how good the stories. I’m a little wary of proclaiming these good, either. Entertaining, but I’m not big on the quality of the work. 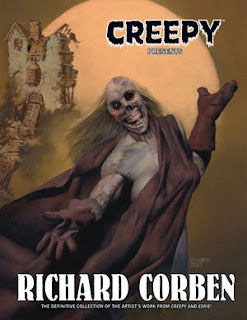 CREEPY PRESENTS RICHARD CORBEN HC
Richard Corben (W/A/Cover), Donald F. McGregor (W), Greg Potter (W), Doug Moench (W), Bill DuBay (W), Steve Skeates (W), Rich Margopoulos (W), Jim Stenstrum (W), Gerry Boudreau (W), Budd Lewis (W), Bruce Jones (W), Roger McKenzie (W), Gerald Conway (W), Al Hewetson (W), Jack Butterworth (W), and Greg Potter (W)
FC, 320 pages, $29.99, 8 3/8" x 10 7/8"
Over 300 pages of timeless terror from a master storyteller! Horror comics visionary and coloring pioneer Richard Corben has been a voice of creativity and change for over four decades. For the first time ever, Corben’s legendary Creepy and Eerie short stories and cover illustrations are being collected into one deluxe hardcover! With an informative foreword by artist and comic book colorist José Villarrubia—who also provides color restoration—this volume features Richard Corben’s original stories, Edgar Allan Poe adaptations, and collaborations with cast of comic-book writers.
Lee: I am soooo ordering this too. Jim said how great the Wrightson Creepy Presents was that I tried to get a copy. It sold out in under 6 months. I’m not paying what they are asking for it now so I might never get it. I won’t make the same mistake twice.
Thomm: This is a better bet than the Crime book, I think. Corben’s excellent and 320 pages for $30 is a damn good deal. 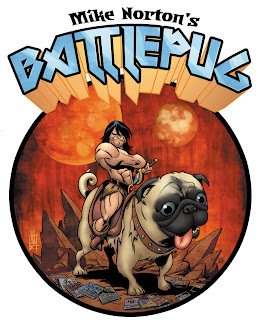 MIKE NORTON'S BATTLEPUG VOLUME 1 HC
Mike Norton (W/A) and Allen Passalaqua (C)
FC, 72 pages, $14.99, 8 1/2" x 12"
The epic tale of blood and drool begins here! Join Molly and her dogs Mingo and Colfax, as she recounts the legend of "The Warrior and the Battlepug"—a tale of a fearless barbarian, his trusty and freakishly large pug, and evil baby harp seals. This volume collects the first year of Mike Norton’s Battlepug—the perfect opportunity to get in on the ground floor of the fan-favorite webcomic by Mike Norton, Allen Passalaqua, and Crank! Includes extras not seen on the website!  Read the webcomic here.
Lee: Read the first story arc online… when it got to Conan raises by cruel Elves and a semi benevolent Santa I was sold. This is pure silliness with great art.
Thomm: Evil baby harp seals! I love it. The Conan mythos is certainly ripe for this kind of thing, and Groo didn’t take all of it. 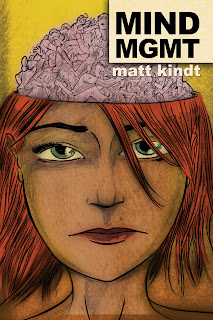 MIND MGMT #1
Matt Kindt (W/A/Cover) and Gilbert Hernandez (Variant cover)
FC, 24 pages, $3.99
Matt Kindt, the most original voice in genre comics, outdoes himself in this bold new espionage series!
Reporting on a commercial flight where everyone aboard lost their memories, a young journalist stumbles onto a much bigger story, the top-secret Mind Management program. Her ensuing journey involves weaponized psychics, hypnotic advertising, talking dolphins, and seemingly immortal pursuers, as she attempts to find the flight’s missing passenger, the man who was Mind MGMT’s greatest success—and its most devastating failure. But in a world where people can rewrite reality itself, can she trust anything she sees?
Lee: Let’s state some obvious facts: (1) Kindt is a great writer and (2) Hernandez is a great artist. It doesn’t even matter what it’s about with this creative team. It will be good.
Thomm: I just hope it develops that dolphins are ruling the world. That would be cool. 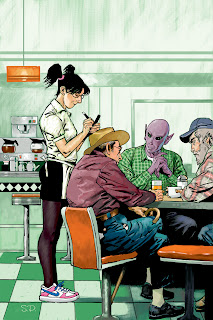 RESIDENT ALIEN #1
Peter Hogan (W) and Steve Parkhouse (A/Cover)
FC, 32 pages, $3.50, Miniseries.
A stranded alien seeks refuge in the small town of Patience, USA, where he hides undercover as a semiretired doctor, masking his appearance using his unique mental abilities. Now known as Dr. Harry Vanderspeigle, all the alien wants is to be left alone until he’s rescued. However, when the town’s real doctor dies, “Dr. Harry” is pulled into medical service—and also finds himself smack dab in the middle of a murder mystery! He’d rather be fishing. Acclaimed creators Peter Hogan (2000 AD, Tom Strong) and Steve Parkhouse (The Milkman Murders, Doctor Who) deliver a truly unique sci-fi adventure tale!
Lee: This is my monthly art pick. I love Steve Parkhouse and don’t get to see enough of his work so I am sold on that alone. As for Hogan. I am not so sold on him. His stories have always been good but not necessarily great. I’ll try the first issue and see how it goes.
Thomm: There’s been some teaser of this in DHP. I think it’s got a great premise and Hogan’s started the story well. I don’t know anything about Hogan to know if it’ll make through to the end well, but it’s worth a look.

Lee:  DH really has their grove back and is starting to rival IDW as the main thief of all my money.
Thomm: Dark Horse these days is reminding me of when I was reading a lot more Dark Horse back in the late ‘80s. Would that Concrete had an ongoing series again, but hey, this is some good stuff.
Posted by Lee at Friday, March 02, 2012