Indies Previews For May Part 1 of 3

Lee: Another month, another huge batch of indie books. Lots of different stuff this month too with a larger than normal selection of informational type books.
Gwen: And I'm back. I know you missed me! 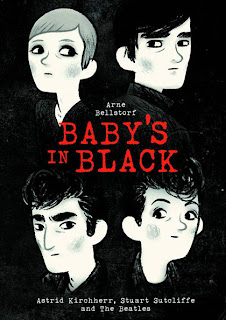 :01 First Second
Babys in Black HC by (W/A/C) Arne Bellstorf
Meet The Beatles... right at the beginning of their careers. This high-energy graphic novel provides an intimate peek into the early years of the world's greatest rock band. The fifth Beatle, Stuart Sutcliffe, falls in love with the beautiful Astrid Kirchherr when she recruits the Beatles for a sensational (and famous) photography session during their time in Hamburg. When the band returns to Liverpool, Sutcliffe stays in Hamburg and becomes engaged to Kirchherr. A year later, his career as a modern artist is cut short when he dies unexpectedly. The book ends as it begins, with Astrid, alone and adrift; but with a note of hope: her life is incomparably richer and more directed thanks to her friendship with the Beatles and her love affair with Sutcliffe. 6x9, 208 pgs, B/W, $24.99 Visit the official site here and read an 11 pg preview here.
Lee: If you are a Beatles fan this is probably a can’t pass it up book. I’m not the biggest Beatles fan so this is pretty much a pass for me even though it does sound interesting.
Gwen: Interesting concept, but as much as I enjoy the Beatle's music I can survive without any extra band stories.

Six more below the break

Moon Moth GN by (W) Jack Vance (A/C) Humayoun Ibrahim
A fascinating blend of murder mystery and high-concept science fiction, The Moon Moth has long been hailed as one of Jack Vance's greatest works. Edwer Thissell, the new consul from Earth to the planet Sirene, is having all kinds of trouble adjusting to the local culture. The Sirenese cover their faces with masks that indicate their social status. Shortly after Thissell arrives on Sirene, he finds himself embroiled in an unsolved murder case, made all the more mysterious by the fact that since everyone must always wear a mask, you can never be sure who you're dealing with. 6x9, FC, 128 pgs, $17.99 See preview pages here.
Lee: This is another very interesting book. Jack Vance is one of the all time great science fiction writers so I am always excited to see his stories in GN form. I wish I was more excited about the art though.
Gwen: Intriguing concept. I always enjoy a good mystery wrapped in cultural anthropology!

AC Comics
Golden Age Greats Spotlight Vol. 09: Catman and Kitten by (W) Charles Quinlan (A) Irwin Hasen (C) L. B. Cole
Holyoke's crimefighting duo are covered in depth with more than a dozen vintage story reprints, including Cat-Man's first appearance, the origin of Kitten, a selection of the best stories from the U.S. AND Australian series, plus never-before-reprinted Little Leaders adventures starring Kitten. 140pgs, B/W $29.95 I HIGHLY recommend visiting the Digital Comics Museum here and reading an entire issue of Catman for free. Very cool!
Lee: Yes, it’s Golden Age reprints but these are really fun ones which contain excellent art by Bob Fujitani, Charles Quinlan, Maxwell Elkans and others. I admit it’s a wee bit pricey but it’s worth looking at if you have an interest in the material.
Gwen: Awesome. I didn't even know there was Golden Age Catman stuff - much less a character called Kitten. This looks like it could provide quite a bit of entertainment. 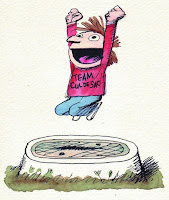 Andrews McMeel
Team Cul De Sac HC by (W) Chris Sparks (A) Richard Thompson (C) Mark Tatulli
Team Cul De Sac is a beautiful testament to the deep influence Richard Thompson and his comic strip, Cul De Sac, have had on artists from around the world. Richard Thompson's is the only cartoon to be endorsed by Calvin and Hobbes creator, Bill Watterson. In 2009, Thompson announced his diagnoses of early-onset Parkinsons. The Team Cul de Sac book serves as a showcase of original artwork donated to benefit Team Fox, the fundraising arm of the Michael J. Fox Foundation, founded in 2000 to help speed the development of better treatments for Parkinson's patients and, ultimately, cure the disease. 8x11, 144 pgs, $29.99
Lee: Jim and I read Cul De Sac daily, and while I like it more than him, we both agree that it’s good. That said, I am always up for helping a good cause and this is one of the best. If you have an extra dollar this month, this is a good way to spend it.
Gwen: Is this really the only comic strip Bill Watterson endorses? That seems rather picky of him. Then again I don't like most comic strips out these days so perhaps I'm picky too. 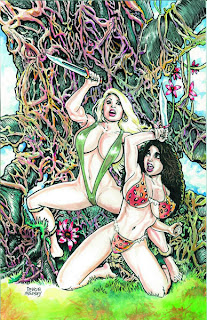 Amryl Entertainment
Cavewoman: Natural Selection #1 by (W/A/C) Devon Massey
Devon is back with a new Cavewoman series! Doctor Something and his nerdy assistant Mona (seriously? Her name is Moana? Wow it's hard to make stories and plot points this exciting) are researching something to produce a something that will yada yada yada something something Look at that cover! LOOK AT IT! You don’t care what the hype is. Don’t lie. You want to buy this because of the jungle girl in the slingshot bikini! #1 of 2 $3.75
Lee: You have to admire a comic that makes no pretense what it is about. None what so ever. Good news, this is cheaper than any book from Marvel or DC BETTER YET.. this is only part 1 of a 2 part series so there’s a chance we’ll see this again next month.
Gwen: Ugh.

Archaia Entertainment LLC
Cursed Pirate Girl Vol. 01 HC by (W/A/C) Jeremy Bastian
Adventures on and under the high seas lead a cursed pirate girl to encounter mythic creatures, gnarled and crusty pirates, and ghostly apparitions as she tries to find her lost father, one of the dreaded Pirate Captains of the mythical Omerta Seas. A whimsical swashbuckling tale of wonderland journeys and unimaginable dangers, starting in Port Elisabeth, Jamaica in the year 1728, and quickly heading across-and beneath-the waves. The first three issues are collected with an all-new epilogue. 128 pgs, $19.95 Read a review of the book here.
Lee: This is a killer! I have the tpb and I loved it! But, I already have this so I am re-spending money for a couple of pages of epilogue. Ooohhhh, tough choice.
Gwen: Hah, this does look very good and as I don't own it yet I don't have Lee's dilemma.

Grand Duke HC by (W) Yann (A/C) Romain Hugault
On the Eastern Front during World War II, Oberleutnant Wulf, a young Luftwaffe pilot, is horrified by Nazi barbarism and at odds with his fellow pilots, even as he finds himself taking to the skies to fight the infamous Night Witches, the 588th Night Bomber Regiment, the most decorated female unit in the Soviet Air Force. Motivated only by his desire to return home to his daughter, Romy, Wulf tries to survive the increasingly desperate and ferocious Eastern Front, while Lilya, the Red Witch, leads her comrades against the German invaders. FC, 152 pgs, $24.95 You can read the artists blog (in French) here and it’s worth looking at even if you can’t read it because of all the pretty pictures.
Lee: Hugault draws some of the best airplanes you will ever see. It is incredible! But, beyond that he is an awesome good girl artist too. So, for me this is all about the art which will be great but the story sounds really good too.
Gwen: Okay, I usually don't enjoy war genre comics. However, I am interested by this due to my recent foray into Night Flight (Saint-Exupery). I really enjoyed reading about early pilots so this looks like it could be good.