Because of all the indie books I skipped reviews last week, which means this weeks list of books is longer than ever. So, no intro, we’re just getting right to it. 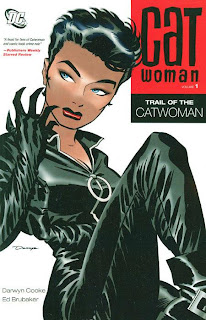 The best of the week by far was Catwoman Vol. 1: Trail of the Catwoman written by Darwyn Cooke and Ed Brubaker, illustrated by Darwyn Cooke and Brad Rader, inked by Mike Allred Cameron Stewart, Rick Burchett, published by DC Comics. Collects Selina’s Big Score, backup stories from Detective, and Catwoman #1-9, 336 pgs, $30
It’s Brubaker. It’s Cooke. Was there ever a chance this was gonna be bad? Nope. Since I read, and still have, these in single issues I really just wanted to see if it was as good as I remembered it to be. And, I am happy to report my memories are as good as ever. This is a gritty, noir-superhero pastiche which is as good today as it was 10 years ago. Yep, 10 years. Bottom line, it’s great and deserves a second, or third read. See my long review here.
You can see what I of the rest of the books below the break.


It’s as good as everyone says it is. Waid writes a solid, happy go lucky superhero adventure story. I am surprised that everyone is raving about Martin’s and Rivera’s art though. Don’t get me wrong, it’s great but the structure and composition of the pages is pure Euro. My only niggle, the design of the villain Brusier is a wee bit annoying. The character and concept are fine but the design is a little dull. Not enough to prevent me from enjoying the series. 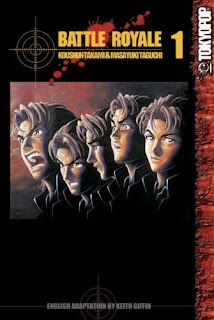 At some point during the week I also dug out Battle Royale Vols 1 / 2 by written/ illustrated by Koushun Takami, translated by Keith Giffen, published by TokyoPop. 216 pgs/ea., $ ?? because I believe it is out of print.


Battle Royale is without a doubt the inspiration for Hunger Games and with the movie coming out I wanted to see how good the source material was. Basically, Battle Royale is everything that Hunger Games isn’t. It’s dark, it’s incredibly violent, and it addresses many of the issues that HG neatly avoids.
Let’s get to the most obvious difference first. This book is close to hyper violent. No deaths off screen in this book. There are brains, blood, and eyeballs hanging out of sockets on many a page. This is a book of kids killing kids and you aren’t spared a second of the violence. This is not for the squeamish.
The good part is that the violence is offset by the story. The violence, even for as over the top as it is, feels like a natural part of the story and just adds to the overall feel of the book. The story is very good and Takami takes time to develop the backstory of the characters as they are killed. He takes time to explore the reality of some kids are gonna play and some kids aren’t. Some kids are ruthless and truly evil and some aren’t. It’s very good.

Which brings us to Black Widow: Deadly Origin written by Paul Cornell, illustrated by Tom Raney / John Paul Leon. 112 pgs, $15. Collects 4 issue mini of the same name. Published back in 2010 in time for the Iron Man 2 movie.
And this falls into that grey area of not bad but not good either. Everything is fine about the book. The story is competent, the art is fun, but it never rises above that. Part of the problem is that I didn’t buy the re-imagining of the character. It seemed like they (the editors) wanted to shoe horn in the Winter Soldier, and a bunch of other junk for the sake of continuity and movie tie in. It’s not the creators fault but this isn’t the Black Widow I grew up reading and the new persona left me cold.

And the one floppy I wanted to mention was The Incredible Hulk #5 written by Jason Aaron, illustrated by Whilce Portacio, $4.
In case you haven't been following, Hulk and Banner have been separated yet again.  In this issue, it's revealed that none other than Dr. Doom performed brain surgery and split our hero in two.


My only comment... seriously, Dr. Doom needs a chain saw made of adamantium to perform brain surgery? My fanboy excite lasted of seeing the chainsaw lasted all of two seconds before I said. What? That’s just stupid. And that pretty much summed up the book for me.  If you think Chimpanzees flinging poop is funny then this is the book for you.  And yes, that scene does occur in the book.
And that’s all for this week.
Posted by Lee at Thursday, March 29, 2012