Lee: Another strong month from IDW but that is no surprise. A couple of new comics and a selection of great reprints are in store for you. 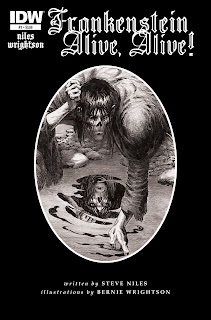 Frankenstein Alive, Alive! #1
Steve Niles (w) • Bernie Wrightson (a & c)
Few works by comic-book artists have earned the universal acclaim and reverence that Bernie Wrightson's illustrated version of Mary Wollstonecraft Shelley's Frankenstein was met with upon its original release in 1983.
Nearly 30 years later, Wrightson returns to his passion project with a comic series that picks up at the end of the classic novel, hailed as one of the greatest horror stories of all time. Frequent Wrightson collaborator Steve Niles provides the script for this epic, decades in the making.
While appearing to be in black and white, each page was scanned in color to mimic as closely as possible the experience of viewing the actual original art, showing off the exquisitely detailed brush work of one of the greatest living artists in comics today.
Each issue will also include supplemental materials, including interviews, essays and a serialization of the original prose story by Shelley. B&W • 32 pages • $3.99
Lee: The real question is do I even bother to get this in single issue format? I know it will be collected in some fancy, high end hc format which I will want. So I highly recommend this to the rest of you but I am waiting for the fancy collection.
Thomm: I’ll wait, too. I’d like to know if the story is any good. I know the art will be. 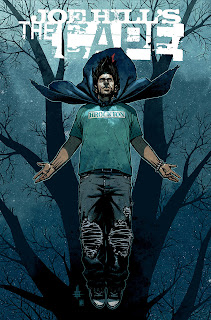 The Cape
Jason Ciaramella (w) • Zach Howard (a & c)
Every little boy dreams about putting on a cape and soaring up, up, and away... but what if one day that dream were to come true?
Eric was like every other eight-year-old boy, until a tragic accident changed his life forever. The Cape explores the dark side of power, as the adult Eric - a confused and broken man - takes to the skies... and sets out to exact a terrible vengeance on everyone who ever disappointed him.
This critically acclaimed, Eisner-Award nominated story, written by Jason Ciaramella, based on the short story by New York Times bestselling author Joe Hill, with art by Zach Howard and Nelson Daniel, will linger with you long after you turn the last page, and force you to ask yourself the question: "What if?" HC • FC • $24.99 • 132 pages
Lee: Wow, this is pricey! I’ve heard it was good and people seemed to like it… but that’s a lot of money for not very many pages. It isn’t often that the price/page ratio gets to me but this is one of them.
Thomm: Price is definitely an issue. I might be more willing to consider it if Joe Hill did the writing rather than it being adapted from his work. 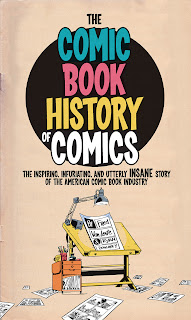 Comic Book History of Comics
Fred Van Lente (w) • Ryan Dunlavey (a & c)
For the first time ever, the inspiring, infuriating, and utterly insane story of comics, graphic novels, and manga is presented in comic book form! The award-winning Action Philosophers team of Fred Van Lente and Ryan Dunlavey turn their irreverent-but-accurate eye to the stories of Jack Kirby, R. Crumb, Harvey Kurtzman, Alan Moore, Stan Lee, Will Eisner, Fredric Wertham, Roy Lichtenstein, Art Spiegelman, Hergé, Osamu Tezuka -- and more! Collects Comic Book Comics #1-6. TPB • FC • $21.99 • 224 pages
Lee: I read the first 3 or 4 issues of this and I really enjoyed it. It’s a fantastic read that will catch you up on the history of comics in a format that really, really appeals to comic fans. Namely it’s a comic book about comic books.
Thomm: The Action Philosophes books are great and I’m sure this is, too. Both informational and highly amusing.

Teenage Mutant Ninja Turtles Color Classics #1
Kevin Eastman, Peter Laird (w) • Eastman, Laird (a & c)
Relive the exciting origins of TMNT, this time in all-new full-color comics! This is where world-wide Turtle mania started! Detailing the entire origin of the Turtles and their first fateful encounter with the Foot Clan and the Shredder! This is your chance to get in on the ground floor of the entire Mirage Studios experience, with the most successful independent comic of all time. Don't miss it! FC • 40 pages • $3.99
Lee: Are Eastman and Laird hurting for money because I can’t explain the sudden market flood of TMNT material. This is the same material as the hc’s that were recently released. I guess the addition of color will make it new and exciting but I am not sure it’s worth it.
Thomm: I’ve never been a TMNT fan, so this isn’t for me. Maybe it’s just time to get a new generation of young readers, which is more the singles angle than the collected angle. 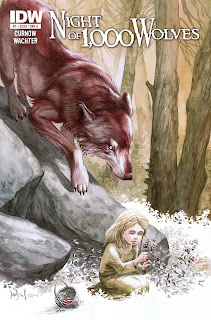 Night of 1,000 Wolves #1 (of 3)
Bobby Curnow (w) • Dave Wachter (a & c)
In the Dark Ages, the tranquil life of Harrick Benjyon and his family is shattered by unthinkable tragedy. Before they can react, the family find themselves under seige by hordes of wolves with one aim. Death. A race for survival becomes all the more impossible by the arrival of the supernatural... and the dark secrets that lie at the heart of the Benjyon family. Another classic horror tale from the company that brought you 30 Days of Night and Locke & Key! FC • 32 pages • $3.99
Lee: Wow oh wow look at that cover. Wachter is getting close to Vess territory with that cover. It is just incredible. If the interior is anything like the exterior then this is a must buy for the art alone!
Thomm: Can’t say as I’ve had many must buys for the art alone, no matter how good Wachter’s work looks. On the other hand, I really like the sound of the premise here. At only 3 issues, it’s worth a look. 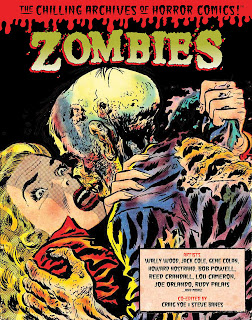 Zombies (Chilling Archives of Horror Comics)
Jack Cole, Bob Powell, Howard Nostrand, Wally Wood, Gene Colan, Lou Cameron, Reed Crandall, & more (w & a) • Lee Elias (c)
From the banned 1950s horror comics that Dr. Fredric Wertham, The U.S. Senate, and mothers didn't want innocent children to devour comes a terrifying and timely anthology of comics of the undead…"Zombies". These gruesome mini-masterpieces are hauntingly delineated by some of the Golden Age's greatest artists at their very best. The nightmarish scripts of the unstoppable living dead will make your spine freeze over in terror! Edited and designed by Eisner winner Craig Yoe with an introduction by the host of the popular "The Horrors of It All" vintage comics blog, Steve "Karswell" Banes. "Zombies" follows in the footsteps of "Dick Briefer's Frankenstein" and "Bob Powell's Terror." HC • FC • $21.99 • 148 pages • 8.5" x 11"
Lee: These books have been great. The stories are typical Golden Age fare so they are slightly predictable but the art… oh la la the art. This is a who’s who of classic artists who drew gruesome, gory monsters when comic books were still allowed to draw such things.
Thomm: What makes this timely? Is it that The Walking Dead is a TV show? Is there an imminent attack of the dead on the horizon? Does IDW know something we don’t? Why won’t they share? 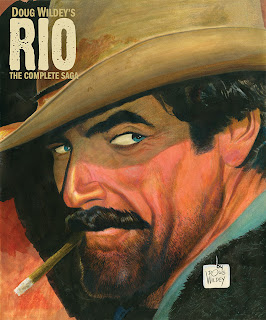 Doug Wildey's Rio: The Complete Saga
Doug Wildey (w & a & c)
Doug Wildey was an acclaimed Comic book and comic strip artist, as well as a noted animator. Very much in the school of Milton Caniff and Alex Toth, Wildey was an artist's artist, a storyteller of the highest order, and worked in many genres—westerns and war stories being some of his most memorable. As an animator he created and designed the groundbreaking Johnny Quest series in 1964, which inspired a generation of cartoonists with its memorable characters, thrilling, breakneck pace, and innovative designs.
In 1987 Wildey began one of his most personal works, the story of an aging cowboy and gunfighter, as well as special agent for the President of the United States, Ulysses S. Grant. Wildey created stories full of human drama and historical accuracy rarely seem before or since in the comic book western. This volume collects the entire Rio saga in one handsome collection, including the final, unfinished and unpublished Rio story. HC • FC & BW • $49.99 • 272 pages • 8" x 12" •
Lee: Yes it’s expensive but it has a good page count and it’s HUGE! I love huge art books and the art is worth the extra size. Yes, Thomm, the story is good too. Beyond that, Wildley is part of the photorealistic artist wave of the 50’s-60’s. He truly is an artist’s artist and I can’t wait to see it.
Thomm: ‘Tis a bit pricey but Lee says the story’s good, so I’ll believe it. I’m a little suspicious of the idea of an aging gunfighter working for US Grant when he was POTUS. Grant was POTUS from 1869-1877, which would have put it early in the gunfighter era, making me wonder about how aging one could be.

Lee: RRRRRIIIIIOOOOOO. I cannot wait. It’s gonna be like Christmas all over again.
Thomm: I suppose so, since I pay for all the gifts at Christmas, too. If I had to choose one here it would be the Comic Book History of Comics.
Posted by Lee at Wednesday, March 07, 2012