Indies Previews For May Part 2 of 3 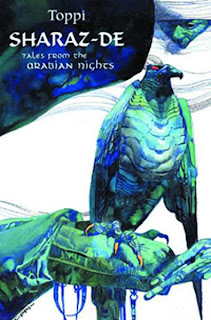 Sharaz De HC by (W/A/C) Sergio Toppi
A set of tales inspired by the Arabian Nights by European comics master Sergio Toppi, exploring a barbaric society where the supernatural is the only remedy to injustice, as Sharaz-de, captive to a cruel and despotic king, must each night spin tales to entertain her master and save her head from the executioner. Tales filled with evil spirits, treasures, risk, and danger, but with ever at their center the passions of gods and men. Translated from the original French publication. 9x12, 208 pgs $29.95 You can read a bio of Toppi here. And if you just google Toppi Sharaz De you can see many, many examples of the art in the book.
Lee: Another book by another European grand master is arriving soon at my house. Toppi’s art is just stunning. He’s a pretty good writer too and this is one of his best. I am really, really excited about this.
Gwen: Hopefully this isn't too close to Arabian Nights. It definitely looks as if it's worth giving a shot. The art is gorgeous too.

5 more below the break 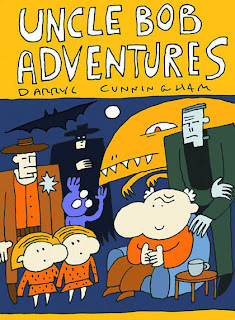 Blank Slate
Uncle Bob Adventures HC by (W/A/C) Darryl Cunningham
Recounting his outrageous escapades to his two nieces, Uncle Bob details secret histories and unbelievable encounters. Hear about Bob's secret missions for her majesty Queen Victoria, mountaineering expeditions to locate Frankenstein's monster, battles with giant lizards in the heart of the jungle, Martian invasions, Wild West gunfights, King Kong, masked jewel thieves and more in this entertaining and thoughtful collection of tales. Conceived as a tribute to the classic adventure, horror, and sci-fi stories that continue to inspire Darryl Cunningham to this day, the author humorously refers to Uncle Bob Adventures as a The League of Extraordinary Gentlemen for younger readers. 138 pgs, FC, $18.99 Visit Darryl’s blog here.
Lee: This just screams buy me. It’s tall tale telling at its tip top best. I am pretty sure that this will make me chuckle as I compare the stories I have told my kids to the stories told here.
Gwen: I agree that this looks like a lot of fun story-wise, but honestly the art sort of turns me off. Too cartoony for my taste.

Boom! Studios
Garfield #1 by (W) Mark Evanier (A/C) Gary Barker
This May, everyone's favorite lasagna-scarfing cat opens the fridge to an all-new ongoing comic book series! Join Garfield as he begins his monthly exploits with Jon, Odie, and the rest of the gang in the latest all-ages must-read from KaBOOM! The Garfield Show writer and comics luminary Mark Evanier teams up with beloved Garfield strip cartoonist Gary Barker to bring you all the laughs (and lasagna) you can handle. With brand new stories featuring everyone's favorite feline, this debut #1 issue is sure to please Garfield fans, both new and old alike! $3.99 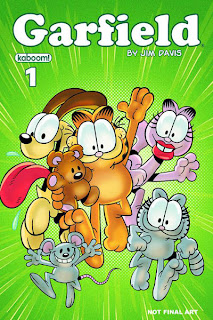 Matthew: Anyway, I saw this in Previews the other week and it rekindled in me my dormant love for fat, orange felines. I used to have the 2nd and 3rd Garfield book (the blue and green ones) and thoroughly enjoyed them and I read the first (red) one in Walden's for sure. He's probably on his Hundredth book nowadays. He's mean and surly, but can be really funny -- Well, actually watching him make fun of Jon or Odie is where the real humor lies (or is that lays -- where's Grammar Girl when you need her). Y'know it just occurred to me that he's a bit like Archie Bunker in a way.


What I really like about this solicitation are the creators involved: Mark Evanier who needs no introduction and longtime former Garfield "ghost"-artist Gary Barker. So, they'll certainly know how to tell good stories. There's also a really cool retro first-appearance (almost unrecognizable) Garfield cover, which would be cool to have. I love my sporadic dose of the Simpsons in their Super Spectacular, so this could be very good and at least it'll be kid-friendly for sure. The only thing I don't like is the price, it's hard to pay $4 for a "kiddie" book. But if you divide the book by the number of people in my house who might read it, then the price comes down considerably.


I want to see the first issue before I commit, but I'm very interested.


See, Lee asks for a commentary and I give him a partial post instead...
Lee: For the record, Matthew sent me the pick and said "comment on this." Now then, for the sake of brevity, I agree with Matthew.
Gwen: I loved the really old Garfield stuff but the later work really turned me off of the whole concept. 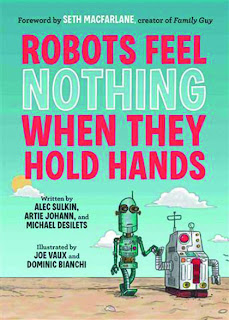 Chronicle Books
Robots Feel Nothing When They Hold Hands SC by (W) Alec Sulkin (A) Joe Vaux
How's the book business going? Not dead yet? Great! Hey, you know what the problem is? Words! You know what people like? Pictures! You know what they love? Family Guy. Okay, so how can we all move forward? How about an R-rated picture book of jokes written and illustrated by the guys that brought you Family Guy? Jokes so silly, stupid, twisted, offensive that they must be captured for future generations of wiseasses. This is what we are working on for you. Oh yeah, and we're late. That's why we have no cover illustration to show you yet. But we're thinking there will be a robot on the cover. A naked robot. 5x7, 192 pgs, $14.95
Lee: Ok, technically this isn’t a comic book but it sounds amusing enough to warrant mentioning. If you like Family Guy then you will like this… and sadly I like Family Guy most of the time because of its crude humor.
Gwen: I like Family Guy but honestly I have a feeling that kind of humor is more fun on TV. Still, it does look like this could be a fun read. 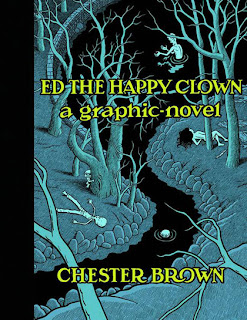 Drawn & Quarterly
Ed the Happy Clown HC by (W/A/C) Chester Brown
In the late 1980s, the idiosyncratic Chester Brown (author of the much-lauded Paying for It and Louis Riel) began writing the cult classic comic book series Yummy Fur. Within its pages, he serialized the groundbreaking Ed the Happy Clown, revealing a macabre universe of parallel dimensions. Ed the Happy Clown is a hallucinatory tale that functions simultaneously as a dark roller-coaster ride of criminal activity and a scathing condemnation of religious and political charlatanism. Brown leaves us wondering, with every twist of the plot, just how Ed will get out of this scrape. 6x9, 256 pgs, B/W, $24.95
Lee: Since those appear to be dead people on the cover I’m thinking that Ed isn’t all that happy. But after that, Brown is a master of the medium so I am willing to take the chance.
Gwen: Wow I just found the perfect gift for my friend Jen. She's terrified of clowns making this an awesome birthday present. Because I'm mean :)

Dal Tokyo HC by (W/A/C) Gary Panter
Collected into one giant volume for the first time, Fantagraphics proudly presents Gary Panter's sci-fi/punk mash-up masterpiece Dal Tokyo. Panter imagines a Mars where Japanese and Texan culture have collided and the result is a dizzying and absorbing mix of more or less intelligible jokes, non-sequiturs and surreal eruptions that can engulf the entire panel in scribbles. Most of these strips were only published in Japan and are being published in the US for the first time! 6x16, 212 pgs, $35.00 Visit Panter’s site here.
Lee: So what does it mean when the text even says the book has is composed of “more or less intelligible jokes.” Is that a compliment? Anyway, Panter’s art is unique and I am sure this will be visually compelling even if the story(?) isn’t.
Gwen: Yeah... I don't know about this. That is a weird mix of genres/cultures right there. Of course Robotica worked so who knows. 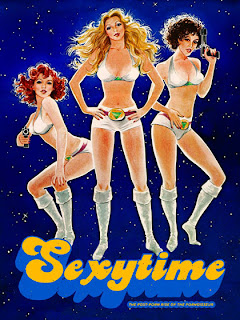 Sexytime: Post Porn Rise of the Pornoisseur HC by (W) Jacques Boyreau
Fantagraphics proudly presents Sexytime, a collection of nearly a hundred movie posters from the golden age of Adult Cinema. Art and graphic design in the 1970's had an undeniably distinctive look, most boldly represented in the world of Adult Entertainment which really hit its stride as an industry in that decade. This book is an eyepopping delight for genre enthusiasts, fans of retro design and the just plain curious (yellow). 9.75x13, 120 pgs$29.99
Lee: OOOHHHHH it’s an oversized hc! As the Wolf said, ‘the better to see you with.’ I do like how you aren’t a perv anymore, nowadays you’re a genre enthusiast or a pornoisseur (is that even a real word?).
Gwen: No Lee, you're still a perv....

The conclusion on Friday.
Posted by Lee at Wednesday, March 21, 2012