The Catch Up Game

How do you catch up once you have fallen behind in your reading? That was the problem I was facing as I reviewed an incredible large stack of comics from multiple weeks. My hectic schedule has left me with the task of trying to get my life back into order.  I was faced with a stack of new books that will take me a few weeks (couple months?) to get to the point where I can do a week in review column for Monday. So I tackled the problem like any good slightly OCD collector would I broke it down into multiple piles of books.
One stack is Marvel, one DC, one Indies and a stack for Vertigo. Now the Vertigo stack is much larger than it should be as I keep up with almost every book but I decided to let Unwritten build up as they are releasing the book bi-monthly and I thought I would let the story arc end before reading it (a buying the floopy version of waiting for the trade).
After that I had then decide what to read. I was backed up on the X stuff and decided to read those books next and then the Avengers. I’m heavily debating skipping Avengers versus X-Men. Often don’t want to feel totally out of the loop with a company, so I on the fence and will get one or two issues of the series. This week I read all of the X and Avengers material. The plan from here is to continue to attack the piles by various segments. Catch up on the two Hulk books (one issue each), read the other Marvel books except the issues of Twelve. Then maybe all Vertigo except Unwritten, make sure I only have issues number six of DC as the sevens are coming out this week. The Indies pile is one to mix in as I read the other stuff. The trick from here for the next few weeks is to make sure that as I get in new books I read what I have already caught up with as a priority. That way eventually I will catch up. 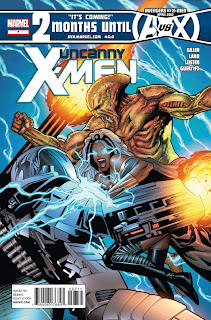 Onto the few books I did read this week. I was about five issues behind on Uncanny X-Men that tells me this is a book I should probably drop. The premise is Scott Summer’s team are establishing themselves as the supreme super hero team and are the toughest X-Men around. The whole Mr. Sinister arc was okay, but did not excite me. Now we have a follow up story to the X-Force storyline where a whole new world was created under a dome and evolution advanced for millions of years. The dome is gone and the X-Men are trying to contain it. The actually story is more about a battle between the last two people of an advanced race and not about the X-Men. Also Storm is on this team and the main Avengers team which is distracting given the heavily advertised Avengers versus X-Men; I guess she will fight herself. This arc is a decent story and if I ignore the consisting odd poses and screaming mouth shots by Greg Land I’m actually enjoying the story. I like that it is following up on the X-Force story, but find that the book seems to be marking time. In other words within two issues this book will move to being tied into A v X. That makes it hard to invest as I know whatever new status quo is just being established is about to be tossed up in the air. Hard to get into a series that are now written as arc’s when the status quo never last more than two years. If you had one or even three issue arcs that would allow eight stories before the company announces “this is the issue that changes everything”. In this case we have a re-launch and maybe two arcs before the next earth shattering event. I will say the Wolverine and the X-Men, Alpha and Omega mini-series and Uncanny X-Force are enjoyable reads. The artist on X-Force is a mismatch as his work is better suited to the type of work like Criminal.  I just hope that at least X-Force still remains its own thing. 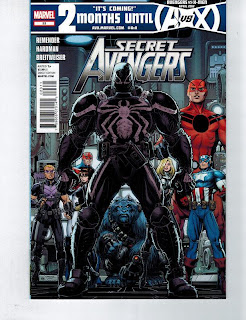 The Avengers material bores me to tears, except Secret Avengers. The Avengers and New Avengers book are trying to tell different stories fighting the same menace. It should have been written as a straight story and just number the damn thing. We have Norman Osborne trying to reassert control over the peace keeping forces and get the Avengers tried for War Crimes. Bendis’ dialogue is, as always, too cute and heavy handed for its own good. Bendis also has some cool ideas, but consistently fails in executing against those ideas. Bendis, like Geoff Johns, is surviving more on reputation than actual talent anymore. I will give Bendis this much, his ideas are much stronger then what Johns is doing. Johns has gone from being one of my favorite writers to being a big name phone it in hack. Secret Avengers was just taken over by Rick Remender and as he did with X-Force he grabs some odd grouping of characters and gives them a superior opponent and then lets the story go. This band is fighting a race of the Adaptoids. The old Super Adaptoids is now a race and has apparently mated with humans. Not being current on the Adaptoids I have no idea if this is Rick building on someone else’s idea or if this is his own, but so far this is great stuff. Rick even adds Venom to the group since I believe that title was canned and Rick is keeping his version of Venom alive in this title. I have high hopes that this series will just ignore A v X and go on its merry way.
Next week’s list of new books is Action, Animal Man, Detective, Fairest (Fables spin off), Huntress, Izombie, Red Lanterns, Stormwatch, Swamp Thing, Sweet Tooth, Age of Apocalypse (must read as part of X stuff), Hulk, Uncanny X-Men (must read), Winter Soldier, Wolverine Alpha and Omega (must read), Fatale, Hell Yeah, Manhattan Projects, Next Men Aftermath, Rachel Rising and Wulf.
Hope everyone has a great week, see you next Monday.
Posted by Jim at Monday, March 05, 2012