DC Preview Review for May Part 2

I told you we would be back. 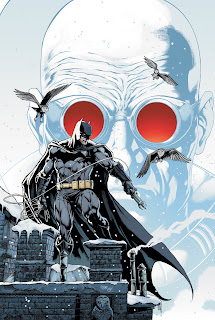 Jim: I have never been a big fan of annuals for years because they were events, themes or almost pure filler. This is the type of annual that I loved as a kid. It was a larger story to spotlight something and often was critical to the main story line or gave us some back story.
Gwen: Mostly I just like the "Night of the Owls" title. I mean, every once in awhile a title actually makes me more interested in a story. 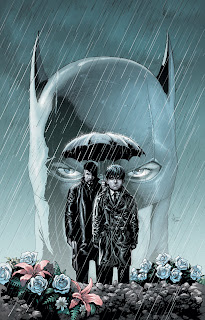 BATMAN: EARTH ONE HC
Written by GEOFF JOHNS
Art by GARY FRANK and JON SIBAL
Cover by GARY FRANKOn sale JULY 4 • 144 pg, FC, $22.99 US
• From GEOFF JOHNS and GARY FRANK, the acclaimed team behind SUPERMAN: SECRET ORIGIN and the SHAZAM! stories in JUSTICE LEAGUE!
• In the tradition of SUPERMAN: EARTH ONE, this spectacular original graphic novel gives new insight into BRUCE WAYNE’S transformation into BATMAN and his first year as THE DARK KNIGHT.
• In this all new take on the Batman mythos, Bruce Wayne is on the hunt for his parents’ killer. His target? The Mayor of Gotham City!
• Plus, who is Alfred Pennyworth – and why is he so determined to put an end to the Batman?

Jim: A year or so ago I might have been excited about this, but between the new DCU, the new Earth 2 Batman and Johns work being sub par anymore, can’t say this is getting me giddy. Johns has become like an old girl friend who seemed fresh and different at first and then you realized she had four things that were interesting and the rest was all surface bullsh*t and there was no true depth to her. Plus churning out one graphic novel of the new Superman and Batman every other year is way too slow of a pace.
Gwen: Blah blah blah. Not that I get my Dad's stuff about his ex-girlfriend metaphor but I already feel with the new DC stuff that we're reading about an alternative Earth. 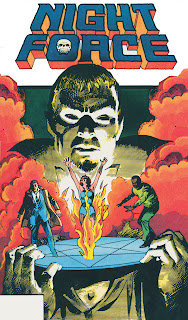 NIGHT FORCE TP
Written by MARV WOLFMAN • Art by GENE COLAN and BOB SMITH
Cover by GENE COLAN and DICK GIORDANOOn sale JUNE 6 • 360 pg, FC, $29.99 US
• BARON WINTERS assembles the granddaughter of DRACULA’S greatest foe, a timelost warrior and a parapsychologist to battle an occult evil!
• Collects NIGHT FORCE #1-14, the 1982 series from the creative team behind Tomb of Dracula
Jim: Obscure series being re-launched, so you publish a trade. On one hand a good idea, but DC and Marvel have so flooded the market that most buyers know they can wait a few month and buy it off Ebay or Amazon for 50% off list price. Plus the reproduction quality has really gone downhill and no extras are being added.
Gwen: Wow, why is this being relaunched? This looks awful... 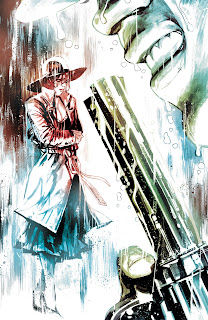 AMERICAN VAMPIRE #27
Written by SCOTT SNYDER
Art by ROGER CRUZ
Cover by RAFAEL ALBUQUERQUEOn sale MAY 30 • 32 pg, FC, $2.99 US • MATURE READERS
“The Nocturnes” concludes here! Calvin Poole is a haunted man with a secret, but it’s nothing compared to the secret he uncovers in a small Southern town. Plus, a major character steps back onto the stage!

Gwen: I really enjoy American Vampire but I'm not sure I'd put it on par with Scalped. Scalped was just amazing. And Fables appeals to a wider audience. But AV definitely has some staying power. 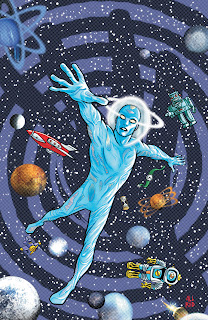 MYSTERY IN SPACE #1
Written by PAUL POPE, KYLE BAKER, ANDY DIGGLE , ROBERT RODI, NNEDI OKORAFOR, MICHAEL ALLRED, ANN NOCENTI, MING DOYLE and STEVE ORLANDO
Art by PAUL POPE, MICHAEL ALLRED, KYLE BAKER, MING DOYLE, DAVIDE GIANFELICE, SEBASTIAN FUMARA and others
Cover by RYAN SOOK
1:10 Variant cover by MICHAEL ALLREDRetails: This issue will arrive in stores with two covers. Please see the Previews Order Form for details.
One-shot • On sale MAY 2 • 80 pg, FC, $7.99 US • MATURE READERS
This one-shot anthology is loaded with unsettling short stories that will hijack your imagination and take you to strange, mysterious places. Journey to the edge of the abyss with Michael Allred! Arrive in the middle of an intergalactic space heist with Paul Pope! Plus: Broken hearts will be cryogenically frozen, a zero-gravity menage á trois will be compromised by aliens, and solar systems will spiral out of control when top comics talents and exciting newcomers collide!

Jim: Vertigo has been publishing a few of these anthologies and using old DC titles for the books. Often fun for the varied stories, I still feel like the driving force is a need to use the title so they do not lose copyright of the titles.
Gwen: Well is you had the copyright to a sweet title like Mystery in Space would you give it up easily? I think not sir.

Jim: I may have to try and force Gwen to pick next month. My beloved DC is now more like a facebook friend to me.
Gwen: Wait a sec... I'm one of your facebook friends. What do you mean by that? :(