DC Preview Review for May Part 1 of 2

Jim: ZZZ…., OMG I have to do another Preview Review. DC is doing little to excite me anymore and more often then not their books are the one I put off reading. Still, once more unto the breach, dear friends, once more.
Gwen: I feel like I only enjoy a very few comic books right now and not many are cape books. 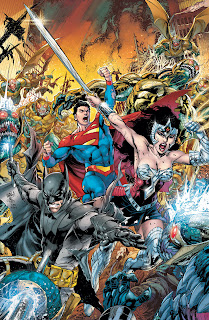 EARTH TWO #1
Written by JAMES ROBINSON
Art by NICOLA SCOTT and TREVOR SCOTT
Cover by GREG CAPULLO
1:25 Variant cover by IVAN REIS and JOE PRADOOn sale MAY 2 • 40 pg, FC, $3.99 US • RATED T
Retailers: This issue will ship with two covers. Please see the order form for more information.
• First issue of an ongoing series from writer JAMES ROBINSON and artist NICOLA SCOTT!
• Who are the heroes of EARTH 2 – and what befell them?
• Starring ALAN SCOTT, JAY GARRICK and many others!
• You may think you know Earth 2…but this is DC Comics – The New 52, where anything can happen!
• Don’t miss the extra-sized debut issue!
Jim: Wait, can it be, can my heart be beating with excitement? Has my beloved JSA being given a second chance at life? WTF, the cover has different version of DC’s Trinity. Oh and look at the marketing hype, this is the new DCU anything can happen. Which means, they have kept the names and any history we think we know is suspect, back to sleep, false alarm everyone.
Gwen: You know why I enjoy this new DC stuff less and less? Because they are rewriting entire characters (characters that I like by the way) and often dropping some of my favorite stuff about the character. The only thing that's still there is the name. Kind of like why I'm pissed about Disney's awful John Carter movie. Of course I may be a bit biased at the moment. 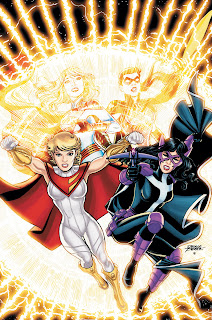 WORLDS’ FINEST #1
Written by PAUL LEVITZ
Art by GEORGE PEREZ, SCOTT KOBLISH and KEVIN MAGUIRE
Cover by GEORGE PEREZ
1:25 Variant cover by KEVIN MAGUIRE
On sale MAY 2 • 32 pg, FC, $2.99 US • RATED T
Retailers: This issue will ship with two covers. Please see the order form for more information.
• New ongoing series featuring POWER GIRL and HUNTRESS of Earth 2!
• PAUL LEVITZ teams with amazing artists GEORGE PEREZ and KEVIN MAGUIRE.
• Discover why these two heroes are stranded on our Earth – and what it means for the heroes of the DC Universe.
Jim: So why the big push to create another separate continuity. I sure there is some grandiose plan by mastermind Dan Idontknowwhatimdoing Didio, but on the surface it seems odd. The art on this book should be gorgeous.
Gwen: Oh look! Powergirl's chest is covered up! I thought DC would never get over the cleavage costume. 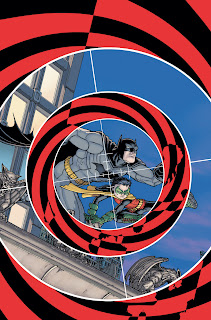 BATMAN, INCORPORATED #1
Written by GRANT MORRISON
Art and cover by CHRIS BURNHAM
1:25 Variant cover by FRANK QUITELY
1:200 B&W Variant cover by CHRIS BURNHAM
On sale MAY 23 • 32 pg, FC, $2.99 US • RATED T
Combo pack edition: $3.99 US
Retailers: This issue will ship with three covers. Please see the order form for more information.
• BATMAN, INCORPORATED makes its NEW 52 debut with an all-new first issue!
• The series hits the ground running as BATMAN and ROBIN face off against the assassin GOATBOY!
• LEVIATHAN’S sinister mission revealed!
This issue is also offered as a special combo pack edition with a redemption code for a digital download of this issue.
Jim: Now the re-launch of this series has me totally befuddled. The special that was released a little while ago had the series firmly set in the old DCU. Is this going to be set in the prior DCU or are they going to convoluted it into the new DCU. If they are convoluting it into the new DCU and Grant is writing it as obtuse as he does some of his books, I will have no freeling clue what is going on. At least it will have great art work.
Gwen: If I get Stephanie Grant back as Batgirl I will read this book. If not I will still be crying on the inside. 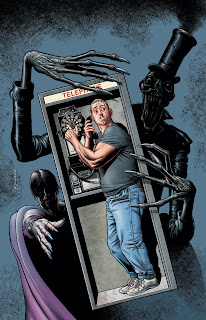 DIAL H #1
Written by CHINA MIEVILLE
Art by MATEUS SANTOLOUCO
Cover by BRIAN BOLLAND
1:25 Variant cover by DAVID FINCH and RICHARD FRIEND
On sale MAY 2 • 32 pg, FC, $2.99 US • RATED T+
Retailers: This issue will ship with two covers. Please see the order form for more information.
• A brand new series by bestselling and Hugo award winning novelist CHINA MIEVILLE!
• What would happen if you discovered the H Dial, an unbelievably powerful artifact that turned you into a super hero?
• And what if you found out that the world is threatened by this very device that’s become your uncontrollable obsession?
• These are just the first questions asked in this thrilling and inventive storyline that introduces the strangest super heroes and super villains in the DCU while exploring the boundaries of reality!
Jim: Another Vertigo series being published under the DC banner. At least this series looks like it should remain relatively self contained. DC is trying too hard to shoehorn series into a blended universe. Certain stuff does not always belong together, such as curry seasoning and ice cream. I, Vampire has pulled it off somewhat, but the first war comic did not.
Gwen: I remember when the H-dial was cape-book appropriate. I'm not sure how this will work but I'm willing to give it a shot although I feel there is an ongoing trend in our society to make stories darker and darker. 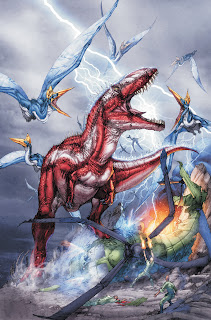 G.I. COMBAT #1
Written by J.T. KRUL, JUSTIN GRAY and JIMMY PALMIOTTI
Art by ARIEL OLIVETTI and DAN PANOSIAN
Cover by BRETT BOOTH
1:25 Variant cover by ARIEL OLIVETTI
On sale MAY 2 • 40 pg, FC, $3.99 US • RATED T+
Retailers: This issue will ship with two covers. Please see the order form for more information.
• First issue of an ongoing series!
• Featuring the first chapter of “WAR THAT TIME FORGOT” written by J.T. KRUL and with art by ARIEL OLIVETTI….and dinosaurs!
• Plus: The first chapter of “UNKNOWN SOLDIER” by JUSTIN GRAY, JIMMY PALMIOTTI and artist DAN PANOSIAN focuses on all-out war in Afghanistan!

Jim: So, the first war book failed and now they are trying a second one. Points for keeping different genres alive, points for adding dinosaurs, but ultimately I expect this book to fail no matter the quality. The market place does not want war book anymore, or at least war stories of a continuing nature. I hope it beats the odds.
Gwen: Dinosaurs can make most anything better. I dislike most war-genre books but if you add a dinosaur... well call me intrigued. 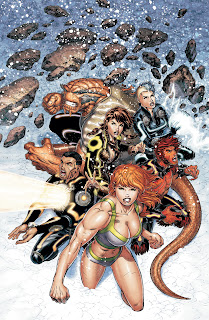 THE RAVAGERS #1
Written by HOWARD MACKIE
Art and cover by IAN CHURCHILL
1:25 Variant cover by BRETT BOOTH and NORM RAPMUND
On sale MAY 30 • 32 pg, FC, $2.99 US • RATED T
Retailers: This issue will ship with two covers. Please see the order form for more information.
• First issue of a new series spinning directly out of “THE CULLING!”
• FAIRCHILD, brother and sister THUNDER and LIGHTNING, the monstrous RIDGE, BEAST BOY and TERRA are being pursued by ROSE WILSON and WARBLADE, who want them dead at any cost!
• No one’s survival is certain each month in THE RAVAGERS!

Jim: First off I would like to thank DC for having six new books that I can rip apart and prejudge. It is always easier to be a critic and I certainly have been nothing but critical for the most part. But Ravagers, are you insane? Howard Mackie writer, a group of people I don’t recognize, thank you ninties but I will pass.
Gwen: Umm, so now Rose is a solid bad guy in this universe? I miss the old Titans stuff when Jericho was a good guy and Slade didn't have some weird daughter that they keep trying and failing to make work as a character.