Lego's and the Bible 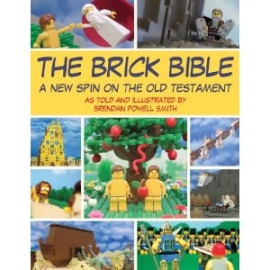 And now for something only sorta off topic, let’s talk Lego’s. But not any generic Lego, let’s talk the Lego Bible! Actually, the full title is The Brick Bible, A New Spin On The Old Testament, as told by Brendan Powell Smith, published by Skyhorse Publishing, 8.5 x 11, 272 pgs, $20.

I didn’t even know this existed until Wife brought it home from the book store the other day. She figured it was a good way to have the kids learn more about the Bible. And, oh my goodness have they been learning about the Bible!

To say this isn’t what I expected is an understatement. You can read more below the break.

Basically, this is the Old Testament in graphic novel form using Lego’s. And, I gotta say… it’s great!

The schools where I live aren’t the best so my kids go to a religious school.  The religious ed classes  at school have increased the kids knowledge of the far beyond that of Wife and I.  So, I guess, Wife bought this as much for us as she did for the kids.

Anyway, for those that don’t remember, it was a rough and tumble time during the old testament and the Lego Bible doesn't skimp on any of the action. 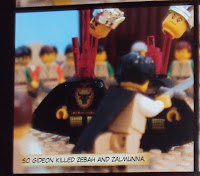 Early one we get to see the beheading of Zebah and Zalmunna.  I was impressed that Gideon was able to chop both heads off in one strike. 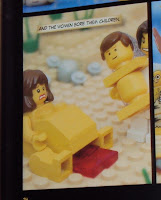 Earlier, after being kicked out of Eden, Women start to have children.  This is still one of my favorite panels because there's no doubt as to what is going on.

And my personal favorite is the continuing saga of David, of David and Goliath fame.   As part of a quest to win his true love's hand in marriage, the King demands 200 foreskins as payment.  So, first David kills a whole slew of people, and then gives the King a bucket of Lego single pieces.  I am never gonna look at those little pieces the same again. 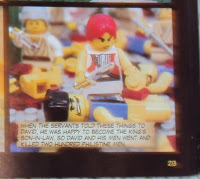 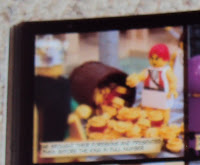 Yes, yes, I jest, and I pulled some of the more violent imagery for this post but I really liked the book.  It's like a cliff notes version of the Bible with all sorts of colorful pictures.  And, even for all the violence the kids loved it too.  There are a ton of adventures and all sorts of killing and maiming and other violent stuff.  Boy says it's the best book he's read in awhile.  And, in case you missed it, the book is a wee bit controversial because of the violence.  But Boy assures me that it's pretty accurate and he was wondering what some of the bigger words meant... like foreskin.
You can read most of the stories here.  And, even if you aren't a big Bible person, you have to admire the creativity with all the Lego's.  Overall, I have to say I've enjoyed this and you probably will too no matter what your beliefs are.
Posted by Lee at Friday, March 30, 2012