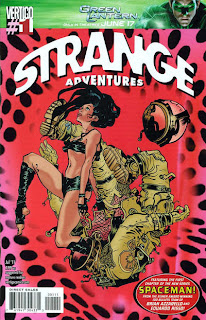 Usually I am so busy that I don’t have a much time to read. Between the wife and kids all asking for some quality time, unless I am “stopped up” which requires me to sit for longer than normal it’s all I can do to get to one book a week. I was really worried that I wouldn’t have anything to talk about this week until Sunday night.

Sunday night is date night at our house. It’s a standing appointment between Wife and I to spend some “quality time” together - - wink wink nudge nudge. For those that have kids, you know what I am talking about. For those without kids…. You just wait.

ANYWAY, we had gotten ready for bed and, like always, I got there first. It’s my job to make sure the sheets are warm for Wife. So I was laying there eagerly anticipating her arrival when the bathroom door swung open and there she was in all her shining beauty. And yes, it’s still amazing. So I gaze into her eyes, and slowly work my way down… looking at every inch because it is fine. Oh yes it is… and then I got to her feet which were covered in heavy, fleece lined, black socks.

So, in my deepest Barry White voice: Ooh baby, you are looking goo-ooooo-ooood tonight.
Wife, walking slowly around the room before getting into bed: Why thank you.
Lee: I like the black socks too. Very sexy.
Wife, with a deep sigh: Must you? And for the record, all the important parts are naked.
Lee, leaning in for a kiss: That is very, very true but if that were were really the case shouldn’t you be wearing a hat?

Needless to say I unexpectedly had some extra time to read so I got to read Strange Adventures, The Unexpected, and Tag Vol 1 tpb. You can see what I liked below the break. 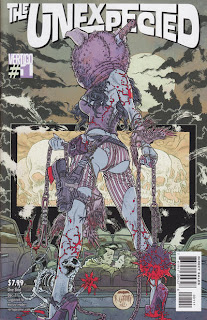 Strange Adventures and The Unexpected. comics published by Vertigo, Each $8, 84 pgs,

These were two specials published late last year.  Each is a collection of short stories with Unexpected being horror stories, and Strange Adventures being science fiction stories.  These books are exactly what you think they are.  They have some really good stories and some clunkers.  The art is predominantly great with a couple of ok pieces.

The stories in SA didn't appeal to me as much because I am more of a horror fan.  They were good but it's not me.  The highlite for me was Juan Bobillo.  He turns in a stunning painted(?), colored pencil (?) something piece that was incredible because it was so far from the style he normally uses.

Unexpected was really, really good.  The stories were a notch better and the art.  Oh my oh my oh my the art!  Jill Thompson and Dave Gibbons are awesome as always.  But lesser artists like Robbi Rodriguez, Farel Dalrymple, Lelio Bonaccorso, and Emily Carroll turn in stellar efforts that make me want to see more of what they can do.  In this book, the art elevated the ordinary stories into something more entertaining.

My only complaint for both books was the last story, which wasn't a story but a 6 page preview for another series.  That's all well and good when it is clearly labeled as such but it was not.  I was just happily reading along when suddenly there's a "buy this issue to read the whole story."  That sucked because I didn't want to buy other issues.  These were one shots and it left a really nasty impression.  This especially hurt Unexpected because I enjoyed it so much. 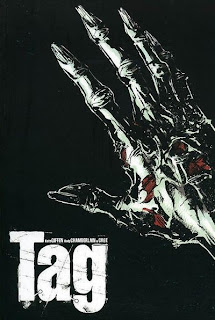 This tpb actually contains two stories, the 3 issue Tag miniseries and “10” which was a 52 pg one shot. Tag is a mix of zombie and curse stories. It’s a very simple concept, if you are ‘tagged,’ you die and slowly begin to decompose. Actually, you become a zombie and the only way to become normal again is to ‘tag’ the next person whoever that may be. The tag curse is based upon revenge so if you were tagged then you did someone wrong in the past and the next person will be someone that wronged you. In ‘10’, 10 people are given a gun with 10 bullets and they must kill the other players in the game. It’s an adult version of Battle Royale.

I love the concepts behind these stories. Both are simple and so open ended that either could have sustained itself as a series. And both would have if they had just been scripted just a wee bit tighter. In Tag, Giffen sets it up perfectly. Issue 1 is a polished setup with a good cliff hanger type ending, issue 2 fills in the blanks, setting up the conclusion in issue 3. Whiz-bang-done! Except, between issue 2 and 3 our lead turned into a complete ass and suddenly I wasn’t rooting for him anymore. This is really a problem because if the lead isn’t sympathetic then you kinda want to see him dissolve into dust. It’s a shift that didn’t feel right given the build up.

'10' had great characters and an interesting story but the execution was muddled. It really felt like Giffen had 3 issues in him but Boom released it as a one shot with page count of 2-1/2 books. It works and I liked it but it was… off in some slight way. I think it was the transitions between the characters. All the facts are there to make them interesting but not enough visuals to go with the facts to make me really care.

The art for Tag is pretty good. Chamberlain drew the first two issues while Chee drew issue #3. Both artists tend to like heavy inks and scratchy lines. Think of John Paul Leon (Earth X) with a little less form and shape. There wasn’t anything technically wrong with it but it wasn’t to my taste.  Andy Kuhn drew the '10' story and that was great. He has a smooth, fluid line that reminds me of Risso but with less black ink.

So would I recommend these books?  Only if you can get them like I did.  You see, my store was having a 40% off trades sale which was the perfect price point for them.  If I had paid $16 for Unexpected and SA, then had them leave me with the crappy 'buy our stuff ad' I would have been pissed.   But for less than $10... they were perfect.  Remember these books and look for them in the back issue bin someday.  You won't be disappointed.
Posted by Lee at Tuesday, March 06, 2012