Indies Previews For May Part 3 of 3 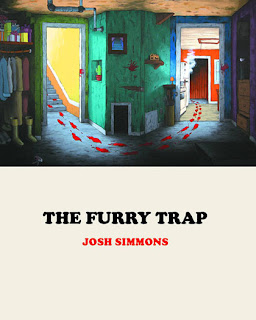 Fantagraphics Books
Furry Trap HC by (W/A/C) Josh Simmons
The Furry Trap is a harrowing and genre-bending collection of 11 modern horror short stories that could curl the toes of a corpse. Simmons' stories work on multiple levels: straight horror, black humor, genre satire and assaults against the political correctness of much of our popular culture. His artwork excels in conveying a feeling of dread and claustrophobia, and the stories herein all share an unmistakable and uncompromising commitment to exploring the crossroads of abomination and hilarity. 8x10, 164 pgs, $24.99
Lee: I like horror stories so the cover really grabbed my attention. It's not all that subtle but it's not gorey either. Simmons has been doing indie comics for years so I'm betting this will be pretty good.
Gwen: I have to say the cover grabbed me as well... but the title throws me off a bit. I don't know what I'm supposed to take away from a collection of shorts stories with that title... are they trapping Furries? Or are the traps furry. It is a mystery only to be solved by reading the book I suppose.

And the final six below the break 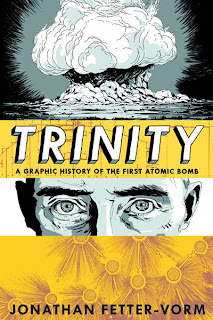 Hill & Wang
Trinity: Graphic History of First Atomic Bomb GN by (W) Michael Gallagher (A/C) Jonathan Fetter-Vorm
In Trinity, illustrator Jonathan Fetter-Vorm tells the history of the race to build - and the decision to drop - the first atomic bomb, and the ethical debates that followed. He begins with early research in Europe, which accelerated rapidly as World War II approached. The action shifts to Los Alamos, and Fetter-Vorm showcases the strong personalities of the physicists under the supervision of Manhattan Project leader, J. Robert Oppenheimer. When the first bomb finally went off at a test site code-named Trinity, the world was irreversibly thrust into a new and far more dangerous age. Richly illustrated and deeply researched, Trinity is dramatic, informative, and thought-provoking. 6x9, 160 pgs $22.00
Lee: And the first of many intellectual books this month, I have to say this looks interesting. It’s safe to say that everyone reading this blog (‘cepting Jim) doesn’t remember how much the world changed when the bomb dropped. But the world certainly did change and this is probably a good historical retrospective of one of the biggest events of the modern world.
Gwen: I find this to be a fairly interesting topic. My grandfather (on my Mom's side) talks about his time serving in the Navy during WWII and he was actually with a large group of ship not that far away from Japan right before we decided to drop the bomb. He only found out after the fact that his ship was part of a planned land invasion if the US hadn't bombed Japan. He always says we may have never been born if he had been part of that invasion. It's certainly interesting to speculate. 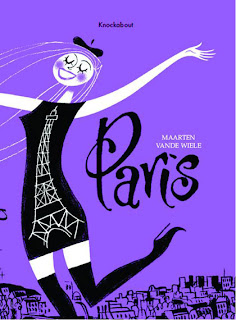 Knockabout Comics
Paris GN by (W) Erika Raven (A) Maarten Vande Wiele
A pitch-black comedy based on stories and gossip from the world of fashion and showbiz. The fashionista characters are dressed head-to-toe in vintage or couture by top designers - all of which are mentioned in footnotes to the artwork. Three girlfriends want the glamour of the Parisian modelling world. Hope has a damaged face but is still dreaming of being the world's top model. Faith is going for a career as a singer, and she's not afraid to play any dirty games to get success! And Chastity wants to be rich and famous - no matter how - and uses her beautiful body to get what she wants. All three of them pay the price of fame... Preview pages here in original language and an outstanding review of the book by TCJ here. 6x9, 216 pgs, $23.99
Lee: This is certainly going to be a pretty book, that is for sure. But I recommend reading the TCJ review first. It appears this is very good, but also very dark with lots and lots of adult themes.
Gwen: Hope, Faith and Chastity? I'm thinking between the character names as well as the fame theme (with a moral too!) I won't be that into this book. Although the art does look compelling.

Papercutz
Best of the Three Stooges by (W) Pete Alvarado (A) Norman Maurer
On the occasion of the new movie, presenting the classic Three Stooges comics for an all-new audience! Originally published in the 50s, 60s, and 70s, these comics find Moe, Larry, and Curly (and sometimes Shemp) in a variety of zany situations that are just as funny today as they were when they first appeared! 7x10, FC, 192 pgs $19.99
Lee: I was never a Stooge fan but I know lots and lots of people who were. Are the stories any good? I couldn’t tell you but I am very curious to see this.
Gwen: Funny, I was just talking about the Three Stooges the other day when my husband was looking at me like a crazy person for laughing like crazy while re-watching Airplane. I tried to explain why it was funny while he was saying a lot of the humor is kind of painfully bad. I countered with the fact that there is even worse humor out there - pure physical humor. And I never found the appeal of humor like the Three Stooges. Of course I don't really get fart jokes either so my opinion is biased. 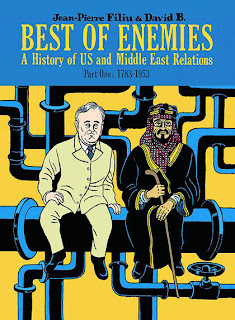 Best of Enemies: History of US & Middle East Relations Vol. 01 (1783-1953) HC by (W) Jean-Pierre Filiu (A/C) David B.
David B. and Filiu draw striking parallels between ancient and contemporary political history in this look at the US-Middle East conflict. The reader is transported to the pirate-choked Mediterranean sea, where Christians and Muslims continue the Crusades, only this time on water. As the centuries pass, the traditional victims of the Muslim pirates - the British, French, and Spanish - all become empire-building powers whose sights lie beyond the Mediterranean. 7x10, B/W, 120 pgs. $24.95
Lee: This is another historical book that I may have to pick up. We, as a country, have too much going on not to understand the history behind the region. America’s memory is at most, 3-4 decades long. The memory in the Middle East is at least 100 or more years. And, with David B. on art chores it will look pretty while educating me.
Gwen: Having a degree in Anthropology I also spent a lot of my college career on history. This does look interesting but just from the time period they seem to be covering I'm not sure how much of this will be fact versus author bias. I'd be willing to give it a shot though. 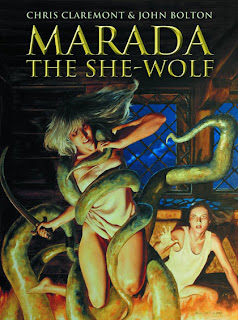 Titan Books
Marada: She Wolf HC by (W) Chris Claremont (A/C) John Bolton
Marada has captured the imagination since her first appearance in Epic Illustrated in 1982. Descended of Caesar, and preceded by her legendary reputation as a warrior, Marada crosses the Roman Empire from adventure to adventure. Written by key writer of The Uncanny X-Men, Chris Claremont, and stunningly illustrated by John Bolton (The Green Woman), Marada the She-Wolf collects the three Marada stories along with the never-before-collected story Wizard's Masque, presented in full-color and accompanied by never-before-seen pages of bonus material - including pencil roughs, deleted scenes, full-color paintings and cover materials. 9x12, 112 pgs. $24.95 Read one of the stories reprinted in this book here.
Lee: This is Claremont and Bolton at their peaks. Presented in huge oversized format this is gonna be great. Yep, I already ordered my copy.
Gwen: Just reading the synopsis I was interested. However, the cover has forever turned me away from this book. But Gwen, you say, don't judge a book by it's cover! Normally I wouldn't but there a too many tentacles near that woman's thighs for me to be comfortable reading it. 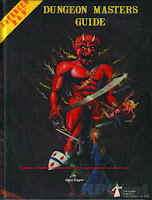 Wizards of the Coast
ADandD 1st Editon: Premium Dungeon Masters Guide HC
These premium versions of the original ADandD rulebooks by Gary Gygax make ideal additions to any game collector's bookshelf or the perfect gift for the nostalgic player. Each book has been lovingly reprinted with the original art and content, but features an attractive new cover design commemorating this re-release of the ADandD core rules! $44.95
Lee: Wow does this bring back memories. The best part is that I don’t have to actually buy this because I think I have my original copy!
Gwen: I didn't play D&D until edition 3.5 and as much as I enjoy a good D&D game I can't think of any reason I'd need this when there are shiny updated games around.

Lee: Another great month. I think my pull list is shorter than normal but it seems like the prices are higher. Oh well, lots of good things to read but I am looking forward to the 'Marada' book the most.
Gwen: Of course you are Lee - that cover is geared towards straight men :P