Catching Up Can be Fun

In my continuing efforts to get back on track with the monthly comics I have succeeded in being caught up with every Marvel series, except the Twelve as the hiatus was so long I decided to wait until I have all four and I can get back into the flow of the story. Independent books I’m actually caught up with again with the exception of the Warlord of Mars books which encompass three of four series all the time. Heck I’m even close on Vertigo with the exception of Unwritten. This means I have actually had the chance to get caught up on some of the DC books. All of this leads me to have a lot of remarks/ impressions on a lot of different titles this week. 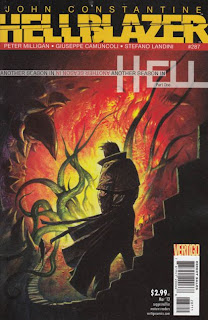 First up Hellblazer has been a great series again under the scripting of Peter Milligan. This current arc called “Another Season in Hell” has been brilliant. John is as he always is making bets and taking chances on things that he never should. Protecting himself first and foremost and negatively impacting those he says he cares about. Hellblazer is great writing and is telling stories about a flawed man who is not an anti-hero; he is not someone to root for or against, but someone whose story you want to read. John is now at the stage of his life where his regrets weigh heavily on him, but he still does not know how to be anything other than the con artist practitioner of black arts. 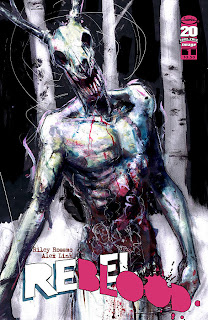 I’m going to bounce all over the place so no rhyme or reason for why I go from one book to the next. Rebel Blood #1 hit my mailbox with art by Riley Rossmo (Cowboy Ninja Vikings) and co-plotter / scriptwriter Alex Link. I love Riley’s art, but this first issue left a lot to be desired. On one hand we have tons of cool scenesof fighting off wolves and monsters, but a plot that was like a Grant Morrison drug induced dream. From page to page I could never tell what was real and what was not real. I’m glad the back of the book told me this was a new take on the Zombie Apocalypse because otherwise I would have never known. That being said I’m more than willing to give this book a chance because it had a good feel to it, I just thought going so obtuse in story telling style for the first issue was a mistake. I have added a fifth person into my circle of people I give comics too and will be interested to see what she thinks of the book. 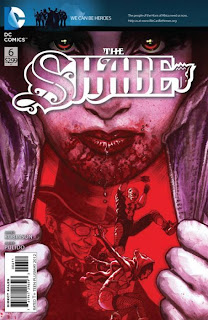 Caught up on the Shade mini-series from DC, I had heard rumors that it might not get the full 12 issues which would be a shame. James Robinson’s writing with DC has been lackluster for the last few years, but this book is a gem. I know they tried to place it in the new DCU, but that is such a crock as this series belongs firmly in the old DCU and actually who cares. The last two issues is about Shade’s “daughter”, a girl he saved from Vampires, but not before she was turned into a partial vampire. She is a hero in Spain and we are now in the midst of Shade helping her face off against her arch-foe the Inquisitor. It is a fascinating tale as we learn about the Shade himself as this series unfolds. The Shade during his long life has been a man, a villain, a hero and everything in-between. The Shade is a full realized character artfully written by James Robinson and illustrated by Javier Pulido for this arc. 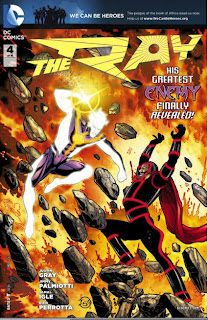 I also read issue #3 and #4 of The Ray by Justin Gray and Jimmy Palmiotti as writer and Jamal Igle and Rich Perrotta as artists. This is a solid re-imagining of the old Charlton character. For those who clamor for a more diverse DCU this character fits the bill in every way you could want with Korean and Indian characters taking center stage. You can’t help but like the Ray and aside from some silly throw away lines about gun control in the middle of a fight scene, the book shines as an example of the right way to broaden the super hero community, make a new character diverse, not change one to fit a quota (see making older characters over into something different). I just hope this book gets the green light to be made into an ongoing series. One of the best things to come out of the new DCU.
Also since I have been catching up and getting bored with all the old stuff I have been trying out a lot of new series as can be seen with my comments about Rebel Blood, so I also got Super Crooks by Mark Millar and Lenil Yu. I have avoided Millar because most of his stuff is more about hype then actual story telling. Of course Mark is a master promoter and he has been able to turn his work into Hollywood success which allows him to make it worth an artist’s time and effort to jump into his projects. With all that as a background and the critical acclaim of Superior, I decided to get Super Crooks and I’m looking forward to trying the Frank Quietly and Dave Gibbon drawn books on the horizon. Of course built in lateness will be the price of reading the monthlies, but what the hell. 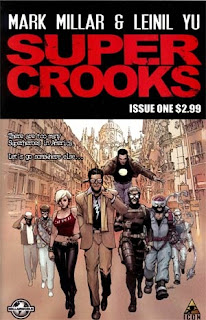 Super Crooks #1 was what it was suppose to be. The bad guys are so over matched by the good guys that it is a joke. The opening sequence of some good guy beating the snot of the bad guys is pure super hero violence done by Millar and Yu. The art is pretty, the story flows, the fight sequence is about neat shoots and not about choreography, as very few artist and writers worry about making any fight flow. The bad guy goes to jail and gets out five years later. Some mentor of his is in trouble and now owes $100 million dollars, reminds me of Dr. Evil as a million is now chump change. He gets the idea that they will rob Spain blind since no good guys are over there. The art is great and the story flows well enough, but it will be the execution of the next three issues to let us know if this book has any true chance of being anything. I mean are we suppose to assume if the bad guys go on a crime spree to get $100 million dollars the heroes will just sit in the US and do nothing. The age of hi-tech communication making the globe a smaller and smaller place is just going to be ignored? If not ignored then the premise has to fall flat also since we have firmly established that the Good Guys are so overwhelming superior to the Super Crooks, that it is not even a contest. It is like the1927 Yankees playing the 2011 Orioles. I get that Millar is going for a caper type film, via Ocean’s Eleven with Super Crooks, but just wonder if it will work at all. Of course Millar is the master of the over the top action and adventure, worrying about logic just slows down the train. My problem with Millar is that I refuse to throw all logic out the window with my suspension of disbelief. Millar’s work will stand as great entertainment as the years go by, but will never achieve any true classic quality. That is not necessarily a bad thing when your job is a being a commercial writer or artist. Often once one achieves enough success then they can indulge their creative drive to do more pure art. I just wonder if Millar has that in him or is he just this generation’s master entertainer. I can live with the later and will look forward to seeing what succeeds or fails from him in the next year or so.
I need to learn how to make this stuff a lot shorter as most Monday columns come in way too long. Next week’s list clocks in a little too long also. The end of month is often catch up time for publishers to make their monthly numbers. My list is Choker (two years later the final issue), Walking Dead, Morning Glories, BPRD, Cobra, Hawken, Torpedo HC Volume 5, Warlord of Mars Dejah Thoris, All Star Western, Aquaman, Batman Dark Knight, Flash, GL New Guardians, I, Vampire, Justice League Dark, New Deadwardians, Scalped, Spaceman, Superman, Teen Titans, Unwritten, Voodoo, Avengers, Avengers versus X-Men, Daredevil, FF, Moon Knight, New Avengers, Secret Avengers, Twelve, Ultimates and Uncanny X-Force.
From sunny and hot as crap Florida, this is Jim, come back next week and we can do this all over again.
Posted by Jim at Monday, March 26, 2012