It was a runaway for the top book of the week as Ireedeemable won hands down. In fact the book was so damn good, that with that being in the best grouping I could almost put everything else in the middle group and have only one “Best” book.
THE BEST 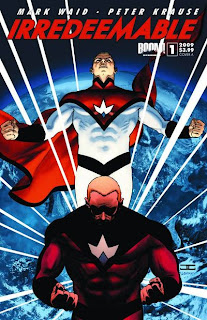 Irredeemable #1 - Writer/Creator Mark Waid, Art Peter Krause, Colors Andrew Dalhouse. This book opens up and grabs you by the throat and never, never let’s go. You feel like you jumped into a speeding car and then the pace quickens. One of the best first issues of a super powered comic book I have ever read. Waid is showing just how good he can be and it is great to see a writer that is deep into his career still step up and show everyone exactly how it is done. Irredeemable is about a Superman type character who apparently has gone over to the dark side and now is after the rest of the long underwear set. The first few pages are the character not only taking out one of his former allies, but killing that hero’s children and his wife. I think this was just in case we were going to think that maybe he had some reason for taking out his allies, we are seeing that he has gone way over the edge as it appears that there are no innocents in his world.

Just an utter hold on to the sides of your seat thrill ride, that builds characterization, story and suspense. A beautiful comic book and a textbook in how to start a series. See my full review here. 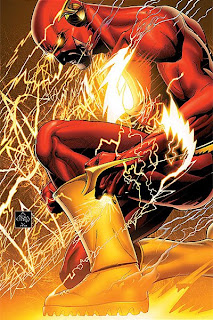 back, the Barry Allen Flash, not the Wally West Flash, not the Bart Allen Flash, not the Jay Garrick Flash, but Barry. The story opens with a recreation of the accident that made Barry Allen the Flash, except that this time it is a murdering psychopath who is being doused with chemicals and lighting. He has an obvious connection with the Flash and he says he brought Barry back. The story sets Barry’s place in the current DCU and then the final part has Savitar jump out of Barry’s chest emblem escaping from the speed force. As Barry touches him he starts to disintegrate and die. We then see that the speed force is affecting anyone in the DCU connected to it and Barry wonders what is happening. The story was all about laying the groundwork for Barry and it did a good job from that standpoint. I guess it was too early to give us more of the reason for Barry being back, but I would have like to hit the ground running (pun intended) and filled in the blanks in other ways. This felt like a prologue, a very good prologue, but a prologue regardless. See my full review here.

War of Kings #2 (of 6) – Writers Dan Abnett & Andy Lanning, Pencils Paul Pelletier, Inks Rick Magyar, Colors Wil Quintana. Despite the $4 price tag for a regular issue of a Marvel comic, this story is working very well. After Vulcan has hit the Kree and their new Inhuman rulers (and hit them hard by ruining the wedding and destroying some of the Kree planets), we see a hard retaliation by the Inhumans. The Inhumans with Maximus as their weapon masters have retro fitted Sentry with sound technology that replicates or stores Black Bolt’s voice. They destroy an entire wing of Vulcan’s fleet and Vulcan is now looking for retribution. It is a fast moving and action driven epic that manages to move some of the characters forward also. It does have its flaws. First why Vulcan is now burning up the side planets of the Kree Empire and why did he not do the same to Hala or at least the world where the wedding was being held? Crystal’s fast turnaround from being upset over a forced marriage to now acting like she is in love with Ronan seemed overly melodramatic and too fast to be real. But these are minor quibbles against what is a great and fun space opera.

Astounding Wolf-Man #14- Writer Robert Kirkman, Art Jason Howard, Colors FCO & Ivan Plascencia. You have to give this book credit, almost ever single issue Kirkman gives us a heck of a twist. I was reading Mark Waid’s blog and he talks about always making sure that you have a character make a left turn, when a right turn is expected and then go down that path and see where it leads. It has to be in character, but Waid states it often leads to exciting results. Kirkman does it with great regularity on Wolf-Man and it makes each issue enjoyable. Astounding Wolf-Man is not so much a super-hero or supernatural hero book, it is about Gary Hampton and his life and what it has become since he became Wolf-Man. Pick up the trade and then jump into the series because the book continues to build on the foundation that has been laid and gets better and better. In some ways this maybe Kirkman’s best book as it continues to do the unexpected and has an unrelenting pace where what happens has a real impact to the character. This issue Gary is in jail and hated by cons and guards alike. After being stuck as Gary due to a inhibitor collar, he is released and, well…. buy the book.

Noble Causes #40 - Writer/Creator Jay Faerber, Art Yildiray Cinar, Colors Jacob Baake. - Noble Causes hits it final issue I will miss it, but I have to say I absolutely loved the ending. Jay said it best when he said it was a soap opera all along and it should end would an appropriate soap opera moment. The finale occurs as Doc Noble is torn between his ex-wife (now out of prison) and his current wife. The last panel has Doc calling one of the women, first apologizing for calling so late, but then saying that she is the one she wants, but we don’t know who it is. It is a moment that as first you think, what have you done to me, but then think (at least I did) what an awesome way to end this book. See the full review here.

Decandido, Pencils Tommy Patterson, Inks Michael Babinksky & Marshall Dillon (Digital Inks), Colors Andrew Dalhouse. Theoretically the end of the mini-series, but we already have more Farscape books being solicited. This was a great “episode” of the TV series as we see the crews plan come together and Rygel become Dominar again, but a wiser one this time. I also enjoyed Rygel kicking Scorpius to the curb. As with any good episode we also laid come groundwork for dangers to come with the mysterious person chasing John and Aeryn’s son, their son exhibiting some powers and Aeryn learning it is okay to be herself and still be a mom. The trades are going to have to also be purchased as I pass on the books and these stories really are the new season of Farscape.

Shrapnel #4 (of 5) – Writer M. Zachary Sherman, Art Bagus Hutomo, Colors Leos “Okita” Ng. The art in this book is at times incredible, especially during some of the battle scenes. Oddly enough the battles are often the hardest part of the story to follow and the characterization and actual story is told best when we are not in the midst of the battle. A strange sort of dichotomy and yet I think even with the flaws this is a well done book. I love the scope of the story as it involves the entire solar system and Samantha is such a strong character that you can’t help but to root for her. This issue sets the table for the conclusion of the first part of the proposed trilogy and has done a good job of setting up the showdown to come.

Deadpool # 9 – The only reason I read this book was due to the cross over with Thunderbolts. You would think it would be some of the best issues of Deadpool, but this is a waste of paper. I find no humor in the character, mediocre art, a lousy plot and a group of characters I could care less about. Instead of making me want to buy Deadpool, it has me about to drop Thunderbolts.

Dead Romeo #1 (of 6) – This book was a total waste of money for me. Not my type of book and I think it was aimed more for the “Twilight” crowd or Anita Blake type of material. Canceled.
Scalped and The Mighty both almost made the grade, but The Mighty was more of a foundation issue and Scalped gave us the background on Nitz, Dash’s FBI boss. They were both excellent books and books that will impact the longer story line, but just did not make my best by a hair.
Posted by Jim at Tuesday, April 07, 2009