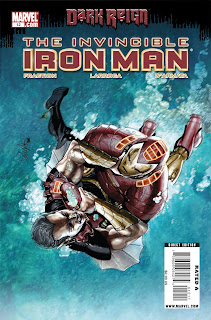 This book will not my make my best or worst of the week, but it had enough different things going on with it that made me want to write a commentary on it.

First off I have not been a Matt Fraction fan and of late I have either grown more accustomed to his style or he has matured and/or has a better story telling method now. I find his work to be more readable then I did before. This book has three story lines going on, one for Tony Stark, one for Pepper Potts and one for Maria Hill. The book jumped from story to story with no real rhyme or reason and in fact could have been broken down into three chapters that focused on each one. The interspersing of the story lines really served no story telling purpose as the story lines are not linked in any fashion other then all taking place during a similar timeline.

The Maria Hill story was very straightforward as she is trying to recover data from a former Stark facility and runs into the Controller. She is captured and has a controller disc put into the back of her head. A sad fate for Maria and one that has me looking forward to how that story line will resolve.

The Pepper Potts story is she now has a suit of armor, THAT HAS THE UGLIEST FACE MASK EVER DESIGNED. The suit has flight, speed, strength, electromagnetic field generators, etc, but no direct offensive weapons. Norman Osborne does not like the idea of a suit running around so he arranges for a disaster that she has to handle and than arrests her after the “test”. I’m not really sure where this story line is going and why the need to arrest Pepper, but I’m all for Tony going by the wayside and starting up an Iron Woman series, 45 years of Tony as Iron Man is enough.

The Tony Stark story is the one that is most perplexing. Tony has altered his looks and is slowly lobotomizing himself (in a fancy tech way) and trying to destroy all of his facilities so Norman can not get hold of them. I have no clue why a man as smart as Tony Stark would think that making himself weaker is going to help anyone long term. The story itself is interesting, but I have yet to have had a reveal that makes me think that this is in character for Tony Stark.

In addition this issue we have Namor going after Tony based on Norman asking Namor to do it, which generated three question in my mind. One – why is Namor in his old suit? Number two he had Atlantean warriors with him, did some of his people not assimilate into the human population (my memory for details on series fails me at times as I’m reading over 100 plus books a month)? Number three and most important, why is Namor working for Norman Osborne? I still can’t buy Namor not being his own man.

The art is well done and Salvador Larroca has either found more obscure people to use for his faces or I’m not as worried about it anymore, but except for Norman Osborne as Nixon, the rest work well, Also this is some of the best coloring I have seen from a book with Frank D’Armata’s name on it. Usually it means tons of obscured art and a heavy hand and dark heavy tones on every panel, but here it worked well.

Bottom line, Fraction has a good story going on, but should avoid using the gimmicks like interspersing the three chapters and just let each chapter stand on its own. Also I want a little more explanation on why Tony is doing what he doing.

Overall Grade C+ - I hate using the plus signs, but this book was not a B and was better then a C.
Posted by Jim at Saturday, April 04, 2009