It was a really good week of comics to me. I had a lot of books that I enjoyed and Green Lantern almost made the cut for best, but was a lot of set-up for what is coming. One thing that I hope DC gets into is developing better collections of recent material. Johns stuff on Green Lantern in 12 issue (or less) deluxe format hard covers would be more enticing to me then the six issue books they put out lately. Too often Marvel and DC’s hard covers are just glued binding book without any little extras and are trades with a cardboard cover. How hard would it be to do a nice 2 volume set of Sinestro War with some preliminary art, all the covers, maybe some of Johns script for the last issue.
THE BEST 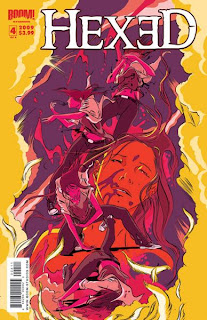 Hexed #4 (of 4) - Creator/Writer Michael Alan Nelson, Art Emma Rios, Colors Cris Peter. This series is such a well done comic and it hits it on every level. The story is fantastic. Although her getting hexed was in the Fall of Cthulhu series it was not needed an issue as this story filled in all the blanks. Due to a cosmic screw up my store never got issues #2 and #3 and when I saw #4 was coming out this Wednesday April 8 I was shocked that the series was already over. I have the fortune to be able to read the PDF files and so I went back and read the entire mini-series in one setting. Lucifer is a young girl of apparently early teen-age years. She is attractive, smart, and cynical and has one heck of a tragic past. All we know as the story starts is the she is working for a woman named Val and appropriating magical artifices for her. Immediately her past comes back to haunt her and she is forced to gather an object of incredible power for a man named Dietrich who intends to use this device to take over the magical underground. Instead of giving a detailed plot summary, let me just say that Lucifer uses her smarts, her skills as a thief and con artist and her magic to survive the night with a bit of luck and some help from friends. The plot moves along and drags you in and you are always rooting for Lucifer and hoping she can get herself out of the box she seems to always puts herself in (there is a pun there if you read the Fall of Cthulhu series). This is Michael’s strongest work yet and you can almost feel how much he loves this character in the writing of the book. In fact it comes across so well I already feel like she is writing her own story at this point. See my full review here. 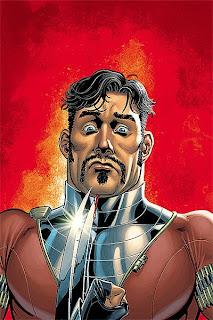 that a writer just owns the series. They maybe DC’s characters, but Gail Simone owns them. Deadshot was turned into a great character by John Ostrander, but Gail Simone has made Catman, Scandal and Ragdoll into fantastic characters. Add in Jeannette (a great creation of Gail’s I believe) and Bane and this new series has been nothing short of terrific. This issue is all characterization as Deadshot and Jeannette go on a double date with Scandal and Liana. The interplay between the characters is what makes this book work as Gail has action interwoven into the story and when you are done reading the book you just flat out enjoyed it. The icing on the cake was the bit with Ragdoll and his cartoon dreams as he got locked into the trunk of the car trying to tag along on the double date. Outlandish, twisted, humorous and a solid entertaining ride that shows even the bad guys can have a heart, but they are still tough as nails bad guys. 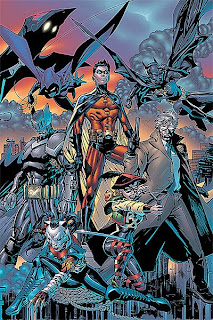 Batman Battle for the Cowl #2 (of 3) - Writer/Pencils Tony Daniel, Inks Sandu Florea, Colors Ian Hannin. My initial fear of what this book was going to be appears to be unjustified and perhaps I was a little tough on issue #1 of this book, because I enjoyed issue #2 quite a bit. I have to admit that after some of DC’s editorial ideas, the Battle for the Cowl just sounded like it would be another Countdown Arena book or something else equally horrid, but instead Tony Daniel is winning me over with his writing and his art (which I have always liked). The bulk of the story is Dick Grayson versus Jason Todd versus Tim Drake. Not as a three way fight, part as the actual story line. The gun totting Batman (with the weird metal plate around his mouth) is of course Jason. Nightwing and Damian give chase and Jason actually shots Damian in the chest forcing Dick to take him to the Batcave for treatment. Dick is racked with guilt as he feels he let Damian down. Alfred lets Dick know he is the heir to what Batman represents better then anyone else. Meanwhile, (Why did comics do away with that word?) Tim is dressed in the yellow circle Batman costume and tracks down Jason’s Batcave, we also see Selina has found Jason hideout. Tony did a great job of drawing Tim as Batman in these scenes, yet still obviously Tim in many panels, which I think is a hard job, but Tony pulled it off. The battle between Tim and Jason was excellent and Jason being his brutal self eventually wins, but leaves Tim in a bad way, setting up Dick versus Jason for the final round. See my full review here.

Wolverine Weapon X #1 - Writer Jason Aaron, Art Ron Garney, Colors Jason Keith. The first issue was a very good start. It was a little light in actual content, but it did set the stage 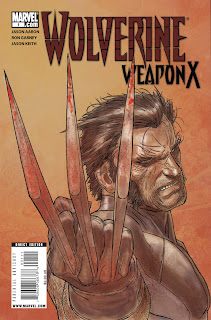 for what could be the main story line for this book for a very long time. We open up in Columbia and see some children killed (off camera), then we see a whole jungle village has been killed. Then we see the off panel bad guy take out some rebel force that has been attacking Roxxon Operations in their country. The last panel shows Wolverine like claws going into one of the rebel’s chest. Cut to San Francisco and a girl being mugged on a train. Wolverine happens to be riding along snoring and apparently drunk under a newspaper. Wolverine chops off the arm of one assailant (not off panel) and scares the crap out of the other one. Wolverine had saved a newspaper reporter and Logan brushes her off. Obviously she will be part of the supporting cast of the book. Next we learn the crux of this storyline and perhaps the long term plan for the book. Logan is on his way to meet Maverick, who passes on information to Logan that someone got a hold of the Weapon X program and notes and is creating more weapons. Logan dons his black suit and finds the empty lab which has at least 10 or more tanks like the one that changed him into a man with admantium bones. See my full review here. 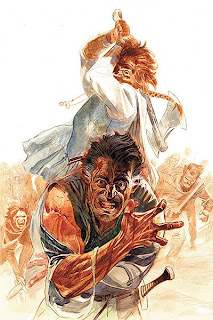 Northlanders #16 – Writer Brian Wood, Art Ryan Kelly, Colors Dave McCaig. The end of the “Cross and Hammer” sage, which is a story about the end of the occupation of Ireland by the Vikings (being half Irish I’m always amazed at how often the “Irish” country was always being conquered). Magnus we find is crazed as he has being running around killing leaders of the occupying force in brutal and horrid manners. He has also had the delusion that his daughter is still just a young girl in his care. The reality is that she had married into the Vikings and was happy with her life as it was now. She also knows her father as a brutal and ruthless man who was never that kind to her. In order to get Magnus to come out of his hiding place and not lose any more men the Viking commander has brought her in to talk Magnus out of his hiding place. The treatment of Brigid by the Viking commander shows you how the Irish are viewed no matter how much they have become an ally. She confronts her father and forces him out of his stupor and he essentially walks out into his death. Magnus states that he knows the demons rule him and he thought by killing these people it might finally get rid of the demons that haunt him. This was a great tale of Ireland, the Vikings and the brutality that was life from centuries ago. Being half Irish and having grown up in the US over the last half century plus, I have yet to come to understand why the Irish seemed to have been hated by so many for so many years. I think they are jealous of our good looks and intelligence.
THE WORST

Ignition City #1 (of 5) – It never really got into the actual story and often was gross for no real reason. At $4 a crack a first issue needs to sell me not be a first chapter telling me nothing. Cancel.

Daredevil Noir #1 (of 4) – This maybe unfairly making my worst of the week list, because it was a decent read (a little jumpy in places), the art was very nice, but it was the same DD story we have seen 100 times. If you are going to set this back into the 30’s then have Matt be something a little different. DD is a noir book anyway and this was redundant and not worth another $12, as each 22 pages issue is $4. Cancel.

Timestorm 2009 2099 #1 (of 4) – A book that was so weighed down with needing to know times of Marvel convoluted continuity (form the 2099 stuff) that it was impenetrable to me in trying to get into the back. At $4 a crack for 22 pages an easy drop. Cancel.
The four dollar price point is playing into a lot of my decision making and I guess I should actually thank the companies for upping the price as I’m a lot quicker to cancel something then give a series a chance. Of course I can always get the trade down the road if it turns out to be the greatest thing since sliced bread. $4 is just an extreme jump in price for the same product it is insane, especially when there are as many deflationary pressures in the economy as their own inflationary pressures.
No Best and Worst for probably two weeks as not only will I be on vacation soon, but when I get back I will have to play catch-up.
Posted by Jim at Tuesday, April 14, 2009