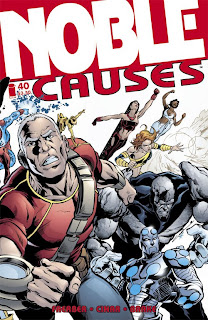 
We always focus more on beginnings then endings, because beginnings are something bright and shiny and new, but endings have their own grace and beauty. When done right an ending can be as beautiful as any beginning and Nobel Causes ended the right way. During a period in my life not too long ago I came to truly understand that the lack of permanence makes something more precious and as it is with life so it can be with other things and Noble Causes gets to go down as one of those small gems in life. It is made more precious and special because it had an ending as opposed to many series (see almost any Marvel or DC character) that lose their special place because it never ends.

I was not always a fan of the series and tried it here and there and finally became hooked after the five year jump and even more after getting into the Faerberverse via Dynamo 5. Now as Noble Causes hits it final issue I will both miss it, but I have to say I absolutely loved the ending.

Jay said it best when he said it was a soap opera all along and it should end would an appropriate soap opera moment. The finale occurs as Doc Noble is torn between his ex-wife (now out of prison) and his current wife. The last panel has Doc calling one of the women, first apologizing for calling so late, but then saying that she is the one she wants, but we don’t know who it is. It is a moment that as first you think, what have you done to me, but then think (at least I did) what an awesome way to end this book. Of course if he had been drinking heavily it could have been a moment out of my life.

Jay ended the book due to burn out and I’m willing to take the man at his word. He was forthright and generous when we interviewed him on the blog and I have no reason to doubt his word. Also if you have ever done anything for eight years or more, you know that you burn out from it. I occasionally burn out on my job and usually slog through a few months and/or take a vacation and then the right feeling comes back and I’m raring to go again. So ending when you can see that you have told the stories you need to tell is a hell of lot better then continuing on and leaving the book after the fans have left it.

Plus we still get Dynamo 5 and other books from Jay both at Image and at Marvel on-line (if you want to sign up for that). This was certainly a fun series and was in the best tradition of super heroes as a family (if dysfunctional), but always had a lot going on and ultimately you cared more about the character bits, then the actual action. I think it was Jay’s way of giving us a soap opera that “guys” could handle, as we always had some super hero action in most issues also.

Yildiray Cinar is certainly an artist that I know we will see more of, as I believe he is doing some work for DC comics already. His layouts and design work have improved over each issue and where at first I felt his art was serviceable, I now think he is getting into being a solid super hero artist and one who appears to be continuing to grow. The color work in this issue by Jacob Baake was solid and never overrode the art.

Overall Grade A – One of the best endings of a series done in comics. Bravo Jay and Yildray and thanks!
Posted by Jim at Friday, April 03, 2009