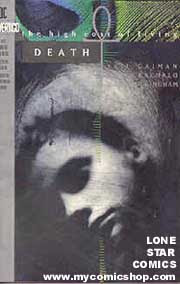 A short story. A short visit.
Death: The High Cost of Living came out in 1993. Written by Neil Gaiman, pencilled by Chris Bachalo and inked by Mark Buckingham, this three issue series featured the ever popular Death, sister of Dream of the Endless in Gaiman's main claim to fame of the time, Sandman. Gaiman also employed another Sandman regular, Mad Hettie, a 250 year old woman who, to all appearances is homeless and crazy. And she is, but she's also pretty knowledgeable about things magical and out of the ordinary.
Anyway, the gist of the story is that for one day in every century Death has to take on a living form so that she doesn't lose empathy with those living creatures she takes at the end of their lives. In this instance she looks pretty much like she always did in Sandman, except not so pale. 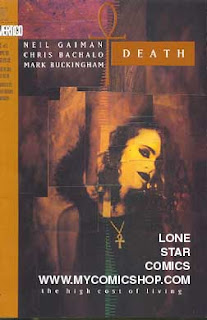 The story is told largely through the point of view of a teenage New Yorker named Sexton Furnival. He's one of those kids who thinks he's world wise and life weary. He calls his parents, divorced, of course, by their first names. He thinks there's nothing worth living for and proclaims that he's suicidal.
He isn't. Every time his life is threatened in the course of the story, he works rather hard at not winding up dead. His mother boots him out of the apartment when she goes on a cleaning binge. He, for no apparent reason, is hanging around in a garbage dump when the refrigerator he's standing on topples and pins his legs. Death, who's in human visage and called Didi, frees him and takes him back to her place. She has an entire life history, including all immediate family members being dead in a tragic accident, and is a teen herself.
Mad Hettie, who's a Londoner, knows of Death's one day alive and manages to be in New York on that day to ask Didi to find Mad Hettie's heart, which she'd hidden a hundred or so years ago and now can't find. Didi agrees, despite Mad Hettie threatening Sexton, and Didi and Sexton go off to some late night club. In a city the size of New York, it's some pretty boy with no moral compass that Sexton knows who's the agent of a blind guy who wants to capture Death/Didi to stop her evil. He thinks it's evil that she takes people, which is ironic given his quick readiness to kill in the story.
It's a nice little story. In the end the kid with no moral compass ends up dead, the blind guy loses Death (but faces no consequences for his killing), and Didi dies. Oh, and Mad Hettie gets her heart, only to start looking for a new hiding place. 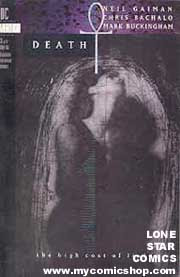 Can't say there's much character development. Didi's death just means she's back to being Death. Not that one should expect a lot of character growth in Death. She's already just about the only psychologically stable of the Endless. Mad Hettie's a character, in the flamboyant sense, and shouldn't change. The blind guy's kind of a cypher, so there's not much about him that could change. The only person who changes in the story is Sexton, who grows up some. Which is good, because he's more irritating than Timothy Hunter, and that takes some doing.
It's good writing. Good art. The always excellent lettering of Todd Klein. It doesn't jump out at you but makes for a good short story. It can be read as a stand alone tale with no knowledge of the Sandman mythos, though there are little bits of reference to that mythos for those in the know. It fits well in the larger body of work Gaiman created with the ground breaking Sandman. Definitely a keeper. And, if you want to buy the individual issues, you can find them at Lone Star Comics, evidently. There's also a trade, but unless you're getting a deal off the $12.99 cover price, you're probably better off with the individual issues.
Posted by Thomm at Sunday, April 26, 2009