From last week's obscure to this week's famous. Not infamous, either.

DC's Crisis on Infinite Earths, published starting in spring 1985, is rightfully famous. The mammoth effort of Marv Wolfman in writing, George Perez in drawing and Dick Giordano in inking, with plotting assists by Len Wein and Bob Greenberger, was one of the first major cross over efforts, and a minority in having a lasting effect on the entire line of either major publisher's entire slate of comics. Think of it. Until Infinite Crisis, 52 and Final Crisis, whose permanency is unquantifiable while so recently having occurred, none of the voluminous cross overs of either of the Big Two has had any long term effect. Crisis, on the other hand, lasted a good 20 years. 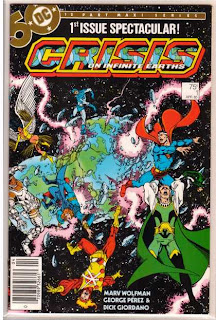 Sure, like the tax code, it inevitably had exceptions, breaks and special treatments glommed on to it over the years, eventually requiring another re-write, but there's no denying the importance of the attempt, and the quality of work put into that attempt.

For me, though, Crisis was signifcant in another way. For me, it was an introduction. I had been reading comics as a regular, monthly thing since late 1977. Throughout that time I had been reading almost entirely Marvel comics. I started with Spider-man, went on to the Incredible Hulk and The Uncanny X-Men, and on and on until I was buying a good chunk of what Marvel put out. Being in rural PA at the time I was relying on subscriptions by mail, which meant once I started with Marvel, I just sort of kept with it. The exception to the Marvel Reign was The New Teen Titans, also written by Wolfman and drawn by Perez. In all honesty, I have no idea how I picked up on this title, but it was one of the best of the era. In fact, of all the books I bought back in those days, only The New Teen Titans, The Uncanny X-Men and The New Mutants have survived to still reside in the Comics Cabinet.

I'm pretty sure Wolfman and Perez were why I bought Crisis. Somehow I must have found a comics shop in the sticks by then, because all my issues are direct sales and not newstand. I was a senior in high school, so I could drive to wherever it was. Probably Sunbury, PA, now that I think about it. 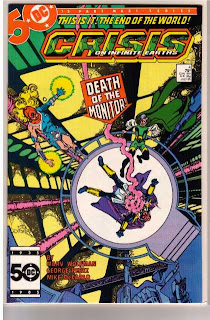 But I digress. I had the occasional Action Comics or Batman or Detective Comics from the '70s when my Grandmother would treat me to a comic, and a local convenience store sold those bags of 4 comics for a quarter, with the covers having been removed, which got me some Flash, Sgt Rock, and GI Combat. My knowledge of the DCU was near nil.

Crisis was like a smorgasborg to me. All kinds of characters I'd never seen before. Some of them killed off right away, like Ultraman, had clearly been around the DCU for quite awhile. Others, like Pariah, Harbinger, and Alex Luthor, were equally obviously new characters with significance to the story. I'd never seen the Psycho Pirate before, but he quickly became a favorite.

And what they did with that story. Taking a multitude of parallel Earths with their jumbled, contradictory histories, and turning them into one coherent (or as coherent as comics trying to maintain a continuity get after 50 years) universe. For a new DC reader like me, Marv Wolfman's introduction on the inside front and back covers of the first issue was set up enough to get a footing on the DCU and jump right in to the story.

The ebbs and flows of that story are excellent, too. The Monitor is killed. His death stops the merging of Earth 1 and Earth 2, though they overlap in places. The heroes battle the Anti-Monitor, who kills Supergirl and appears to die himself. The Villians take over Earth 4, Earth S 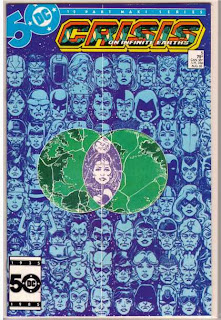 and Earth X and attempt to take over Earth 1 and Earth 2. The Anti-Monitor renews himself, reuniting the heroes and villians in the fight against him. With the aid of Darkseid, the Anti-Monitor is destroyed, as is the anti-matter universe, while the Spectre uses the powers of all the magical beings in the DCU to help unify the universe. The story runs from Oa to Apokalys, to Tamaran to Vega to, of course, Earth. Or Earths, for most of the story. The story lines run from the cave dwelling past to the 30th century of the Legion of Superheroes. That's one gargantuan effort. It didn't even seem odd that the Superman and Lois Lane of Earth 2, Superboy of Earth Prime and Alex Luthor would like together in some bubble dimension within Luthor. Turned out that was handy left over when Infinite Crisis was devised. With his current role as uber psychotic, I'd forgotten how minor a player Superboy was in Crisis. 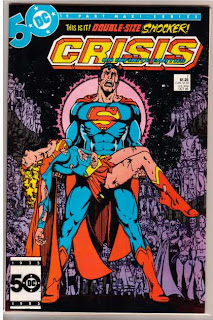 And it's remarkably coherent. There are a few points where stories and characters are continued off into other books, but none of those are necessary to read Crisis and understand what's happening. They're jumping off points to follow those characters further, if the reader is so interested. Sure, a lot of the books in the DCU had the famed "red skies" issues that had nothing to do with Crisis other than the sky color, but that's all to the good. A reader could enjoy those books without going to get Crisis, if so desired.

Twenty five years later, it's funny to see how naive a lot of the major characters appear. It sort of fits with Superman or Captain Marvel, but Batman is far from the Dark Knight created by 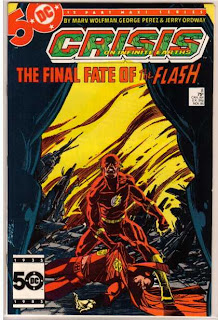 Frank Miller. Hal Jordan doesn't even appear in the series, with John Stewart holding the Green Lantern role. Why, at that point there was only one Green Lantern allowed at one time for Earth. Citations to other comics and other issues were rampant, too. I'd forgotten how common that once was. And Wonder Woman was re-born at the end in the best Wonder Woman run ever. Of course, that was written and drawn by Perez. The Wally West Flash became the Flash I knew, the one I thought of as the primary Flash.

My biggest single complaint about Crisis? Too often I couldn't read it when they attempted to write in white on a black background. The black just bled all over the white and obliterated it, especially in the early issues of the series. That's a production issue, not a story issue.
Posted by Thomm at Sunday, April 12, 2009