Kick Ass #6 - When Has Something Gone Too Far 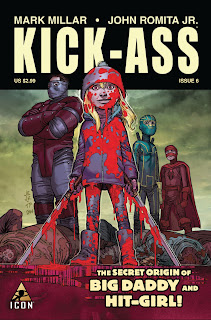 When have we gone too far with something? I got into a debate once before about Kick Ass and I found to my dismay that for some people their are no limits and that bothers me on a certain level.
What I'm talking about is the portrayal of violence. Even though this is in a mature reader comic (which I do not believe means a ten year old cannot buy it in many states) it is showing a young girl of perhaps 10 or 11 years old drapped in blood and enjoying hurting and killing people.
Now I have not read any issue other then number one, but I have seen enough pages to know that the story of Kick Ass seems to have a heavy focus on this little girl and she manages to use the "C" word and be covered in blood quite frequently. The cover image is really "nice".
Add to that image the one in this issue that has her father shooting at her and the other pages in this post and we get a clear picture of over the top and ridiculous level violence. That permeates this book.

Of course that is a point that someone can use against my saying this is wrong, because it is obviously an absurd level.
From my viewpoint this book goes to far and as a society we should have some limits. We have the term pornography and I think this books reaches that level. 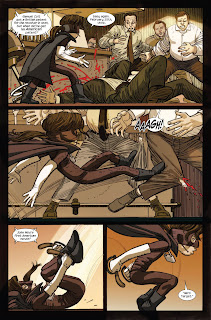 facing child porn charges over sexting and 15 year olds exhanging naked pictures is not the same as the 40 year old man looking at naked 10-12 year old boys and girls) then is there not a level of violence that should be considered pornographic.
Thomm has made the point on occasion that we show violence with no qualms, but show a sex scene and many people get upset.
I'm no polyanna who wants everything sanatized, I enjoyed Preacher, read Ennis' Punisher and the level of violence in even a book like Flash Rebirth is all okay with me as it is between adults. Once you bring a minor into it and I'm sorry a small girl it makes it wrong in my viewpoint.
I'm not advocating censorship, but we do not allow everything to be printed and if this is violence raised to a pornographic level and therefore child pornography, then should it be published? I'm sure the comic stores are not selling their "X" rated comics on the main racks of their stores like this is sold. 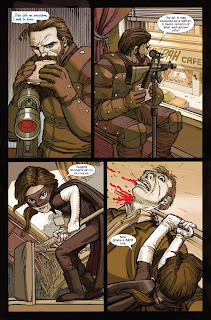 What would be the reaction be if we found out the little girl was only killing gay people or if she was black and only killing white people. Would it be okay if she were to spout racial epithets and then gleefully go kill a roomful of black people as long as they are drug dealers?
We it be okay if we show her father making wild love to a sheep and she was getting it on with a german shepard?
If anything is okay, that we have no society. Freedom of speech is not unlimited, no yelling fire in a crowded theatre. Without limits we lose our ability to be a society.
How do you think we will be judged as advocates of our favorite artform if this is a book that you have to defend.
What is the point of this story and did it have to be made this way. Enough is enough, wrong is wrong and this book is wrong and if you are buying it I think you are wrong to support it.
Posted by Jim at Thursday, April 16, 2009