Stuff of Legend – A Review 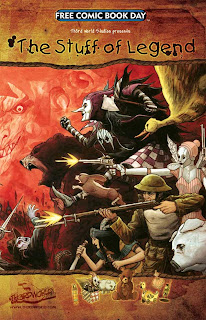 The Stuff of Legend

The word from Th3rd World
The year is 1944. An allied force advances along a war-torn beach in a strange land, outnumbered and far from home. Together, they fight the greatest evil they have ever known. Never ending waves of exotic enemies come crashing down on them, but they will not rest. Thousands of miles away, the world is on the brink of destruction. But here in a child's bedroom in Brooklyn, our heroes, a small group of toys loyal to their human master, fight an unseen war to save him from every child's worst nightmare.
Led by the toy soldier known as the Colonel and the boy's faithful teddy-bear named Max, the toys enter the realm known as The Dark. There they will face off against the Boogeyman and his army-- a legion of the boy's forgotten, bitter toys. Fighting to survive insurmountable odds, the toys will discover this is a battle not only for the soul of a child, but for their own as well... 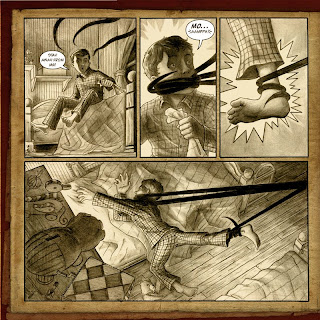 The first thing that strikes you as I read the first six pages was the artwork. It is stunning and beautifully rendered. Charles Paul Wilson III is someone that I have never heard of before, but I know that will not be the case in the future. As each new person “discovers” his art I believe they will be as captivated as I am. He has a very realistic style and an illustrator’s touch, more reminiscent of classic newspaper strip illustrators then typical comic book artists. His use of angles, page layout and ability to show emotion with expressions and body language denotes his great skill in more then just the pure ability to draw, which he has in abundance. I focus on the first six pages only at this point, because by then the story has already pulled me into it and I know I want to see this through till the end.

For the rest of the story the artwork never lets you down. He draws the surreal idea of toys coming to life with the same weight and strength as he does when we are drawn into the battle scenes as the toys become real. Charles’ work is so strong, yet at times so subtle in his ability to give us a character’s demeanor with body language from a Teddy Bear no less, as well as expression with a simple line. Without over selling it, this is one of the most impressive debuts I have seen for any artist in comics in a very long time.

The actual story starts innocently enough in a boy’s bedroom when the closet door opens and black tendrils come in and spirit the boy away. Over those six pages I’m immediately captivated. We are in 1944, so it is a different time and age, one more innocent from the perspective of today, so the boy seems innocent also. The bump in the night stirs the same fears everyone has as a child and then to see it come to life and watch this boy dragged against his will into the closet is one heck of a good start. 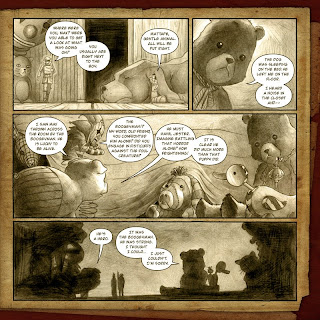 The next few pages introduce us to the toys. The toys come to life after the boy is dragged into the closet and we find out (as in all such tales) they are always alive, just not when we can see. I have always loved this concept as I believe most children (as did I) have the feeling their toys have life or at least you love one or two of your toys enough to almost give them life. After much debate and interplay (which serves as character development) a group of toys marches off to save the boy.

The next part of the story has the toys now alive in the land where the boogeyman has taken the boy. As the boy’s father is in Normandy and it is 1944 the parallels to the D-Day invasion are intentional, but are part of the underlying story. The Teddy Bare has become a real bear, the toy solider a real solider and all the rest of the toys have come alive in their own ways. We see our heroes win the first battle, but then Percy the Pig gets enticed by the bogeyman to help him. As the solider arrives to try and save him, the bogeyman rips him in half to end the first story.

It is a story about World War II, about friendship, loyalty, loss, growing up and innocence being taken from you. It was a fantastic beginning to a story that has a lot of heart and emotion as well as plan old fashion action and adventure.

Overall Grade A – The Stuff of Legend is working on being its own legend. This looks to a true gem, I loved it.

Some places to visit:

Th3rd World’s Page of The Stuff of Legends

An Interview of Mike Raicht by Vaneta Rogers from Newsarama