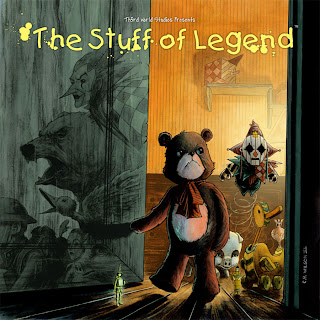 Normally I'm loathe to post press releases, but Stuff of Legend is a great book and only 2 issues long and I would love to see this book succeed for Th3rd World beyond their wildest dreams. Gwen and I loved it and Thomm saw potential in the series (which is akin to most people loving a book).
See our reviews, here, here and here.

Th3rd World Studios launches dark fantasy series The Stuff of Legend on Free Comic Book DayTh3rd World Studios' (http://www.th3rdworld.com/) new fantasy series, following the adventures of a band of loyal toys on a mission to save their owner from the clutches of The Boogeyman, is available April 29, 2009 through Diamond Comics Distributors. The first volume of the series will be released bi-monthly with the first issue hitting stands in July. The series has already received high praise from some of the industry's top veterans.

Brian K. Vaughan (Y: The Last Man, Lost) calls The Stuff of Legend, "…some of the loveliest artwork I've seen in a comic book in a long, long time, and a darkly beautiful story to boot."

Frank Quitely (All Star Superman, We3) described the series as, "...a real page-turner. Economical, effective story-telling, with both story and art complimenting each other perfectly, and hinting at something darker. Very involving."

Joe Kelly (Amazing Spider-Man, Deadpool) declares, "I came for the preview, but stayed for the war. "The Stuff of Legend" caught me immediately and much to my surprise utterly refused to let go. The art is fantastic (I'd say "luxurious" if it wouldn't sound too haughty!) and what looks at first blush to be a simple story quickly reveals itself to be layered, emotional, and complex. The characters are painted with austere but revealing strokes, saying more in a few panels than most writers do in an entire issue. By the end of this preview, I didn't just want to get the next issue, I needed to get it, because I found myself concerned about what might happen to them next."

The Story was created and penned by Mike Raicht (Army of Darkness) and Brian Smith, with pencils by newcomer Charles Paul Wilson III. Set during the height of World War II in 1944, The Stuff of Legend follows a group of toys on a grand and sometimes frightening adventure into a realm called The Dark to save their master from every child's worst nightmare -- The Boogeyman."I think when people see Charles' art on this book they will be absolutely blown away", said publisher Michael DeVito. "Raicht and Smitty have done something just as special with this script, taking familiar story elements and making them their own. This story crosses all age barriers. There is something here for everyone, whether you are 13 or 40. "To celebrate the announcement Th3rd World Studios creators will be signing at various locations across the US where FREE preview copies of the first 20+ pages of the book will be available.