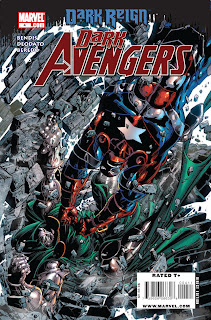 As is becoming my habit I try to pick a “big” book on Wednesday to read and then do a short review on it. Dark Avengers is ostensibly one of Marvel’s biggest books and is certainly the book that forms part of the core of Dark Reign. In many ways it represents what is both good and bad inside the Marvel Universe.

On the good side Marvel knows how to produce a high quality and professionally done comic book. The artists are a big part of the strength of Marvel and this book is proof of that statement. Deodato since changing styles and going to a more photo realistic type style in his work has become a bigger and bigger star for Marvel. This book always looks great and at times gets almost Neal Adamish in his work and for me that is a huge compliment. His layouts are excellent, his action is superb, his expressions are well done and his women are beautiful without being freakish and even the talking heads panels he has to do in illustrating a book scripted by Bendis, are done well.

On the bad side Marvel is charging $4 for a 22 page comic and almost refuses to care about what the fans say and offers nothing extra in exchange. Also on the bad side of the equation is Bendis appears to need an editor, but he is such a huge star at Marvel, it seems they let him write a book anyway he wants, no matter how inane. His use of time travel holds no logic to it and Bendis seems to not care. Maybe he thinks since time travel is pure theoretical crap, he does whatever he wants and doesn’t care if it holds any internal logic. For me it continually takes me out of the story. The other Bendis flaw is everyone sounds alike, so while all of these “Avengers” are the bad guys, the dialogue could almost as easily come out of the real characters’ mouths. Finally the big reveal that the Sentry is still alive and that he scares everyone was just plain stupid. The Sentry is one of Marvel’s biggest mistakes. He was good as the one shot mini-series, he is a mistake being shoved (retro-conned) into the MU. Superman does not work in the MU, whether he is crazy or not.

From a pure marketing perspective though Marvel has garnered enough of my interest that I’m following some of Dark Reign and therefore end up buying a book that I have disliked from a story telling aspect, but love the art. In defense of Bendis, I believe he has a good handle on where to take some of these stories, but his ability to capture a character’s voice and to execute against some of these ideas is lacking. I have thought for a while that Bendis would make a great editor at Marvel, where he provides the framework for the MU and other writers execute against the ideas.

I do worry about Marvel from an overall standpoint because I believe they are setting themselves up to be moving heavily to digital or e-comics. They own 50% of the direct market and if they are successful in migrating a decent percent of their base to digital the impact on many specialty retailers will be devastating, but that is a column for another time.

Side note – I added the Executive Producer credit because I’m not sure when this started to show up, but is smacks of the old “Stan Presents” crap, when someone has a huge ego and they want their name stuck on stuff, just because.