Moral Ambiguity of the Conqueror 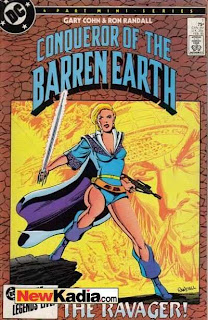 Funny how ownership of things goes. I was a long time reader of The Warlord from DC, which, of course, meant I read the back up series Arion and Conqueror of the Barren Earth. Now, I don't own any of those Warlord issues. When Arion spun off into its own series I bought those, but don't own them anymore, either. What's left of that era of fantasy comics? A four issue mini-series of Conqueror of the Barren Earth, writtne by Gary Cohn and drawn by Ron Randall. Best guess at reason for its survivial? Only 4 issues, so not much room taken in the Comics Cabinet.

Not that it was a bad series. If it was, I would have ditched it a long time ago. It's a self contained story, but the reader gets the feeling there's some more information about some of the characters that's missing, especially Skinner, Renna and Barasha. On the other hand, it's obvious some major plot points are being resolved.

The story centers on Jinal Ne' Comarr (whose name has the unfortunate side effect for me now of calling up Maryland regulations, which are abreviated COMAR). Jinal is a young, blonde soldier/warrior in a distant future where the bulk of humanity left Earth for greener pastures. Humanity is at war with an insectoid species called the Qlov, and it appears both the humans and the Qlov are attemtping to take control of Earth. Earth is now a desert but an inhabited one. Some of the inhabitants, like Skinner and Renna, are still as human as Jinal. Other inhabitants are lizard humanoids (Harahashan) like Barasha and his mate, Lur, while a third humanoid species is composed of fungus and called the Mulge.

Jinal came to Earth aboard a large warship some time around issue 63 of The Warlord. I don't recall a thing from the stories that ran in issues 63-88 of The Warlord, and there's nary a bit on it on the net, either. Not that I found, anyway. From the summary at the start of the miniseries, it seems a Qlov ship also came to Earth and the two ships managed to destroy one another, but a few survivors landed on Earth. By the time the miniseries starts Jinal is the only human survivor and she's been having some adventures with Skinner, Renna, Barasha, Lur and a human shaman named Yisrah. Earth has no central government, states or countries. It's a series of city states and fiefdoms of humans, nomadic Harahashan and underground dwelling Mulge, but Jinal, Skinner and Renna have forged an alliance for their city state with Barasha's tribe of nomads. Jinal plans to expand this alliance into a single world government that can oppose the Qlov invasion she believes is coming.

A further complication is the presence of the Old Ones of D'roz who live in a floating city that hovers above a terrestrial city. The D'roz don't interact with the rest of Earth's population much but clearly have more advanced technology than the other humans, the Harahashan or the Mulge. Jinal has already been to the D'roz for help in fighting the Qlov but the D'roz refused to help. 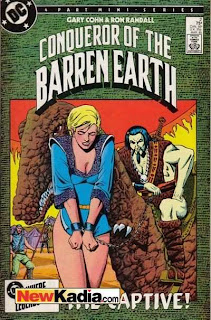 Cohn and Randall did an exemplary job of summarizing plot threads that ran through 25 issues of the Warlord in only 5 pages. From there the story jumps into the party of Jinal, Skinner, Renna, Barasha, Lur and Yisrah returning to Skinner and Renna's city/state, only to find it has been destroyed and nearly all of its inhabitants killed. They go to a nearby refuge that provides access to an underground sea and find the few surviors surrounded and holding off a huge army led by Zhengla Koraz. Zhengla is supposed to be a half breed. A half breed of what species is uncertain. He's bigger than either the humans or the Harahashan, but I'm guessing those are the two combined for his ethnicity. He's sure not fungal, 'cause those guys are all bubbly purple looking.

Anyway, turns out Zhengla has beaten Jinal to the punch on the unified world concept. He's marching across the lands with his armies, expanding the army's size with each additional conquest. Most places he conquers are not destroyed. Skinner and Renna's city was because it wouldn't cooperate with him. Jinal and Yisrah are captured by Zhengla while Skinner, Renna and Barasha escape, the latter going to get his tribe and other tribes to come rescue Jinal. Yisrah readily agrees to cooperate with Zhengla but Jinal refuses, no doubt in part because Zhengla insists she's destined to be his mate. Who wants to have sex with a guy who has mushrooms growing out of his forehead?

Seems old Zhengla had a thing for the magic mushrooms. He was a petty raider until he stumbled on some Mulge and a human woman with mushrooms growing out of her eyes. She was chained but was some sort of oracle and told him to kill her and combine her blood with the mushrooms from her eyes. He does, ingests it and has a vision of forming a unified world government through conquest. A side effect of the experience is he has mushrooms growing out of his forehead, which look like mushroom horns. I get the symbolism being evoked, but it seriously detracts from the otherwise intimidating appearance of the man. Who finds mushrooms scary?

Jindal's resistance to Zhengla means she's turned into a slave. An appealing, scantily garbed slave, too. After many months in this role, she suddenly becomes devoted to Zhengla when he offers her up as a prize to a Mulge leader, then rescinds. After that she goes back to her old costume and fights at Zhengla's side. She even manages to get Barasha to ally with Zhengla when Barasha returns with thousands of other Harahashan to rescue her. Skinner and Renna are also along. Soon thereafter Yisrah is exposed as a spy for the D'roz, though he uses a short range teleporter to escape before he can be captured.

Jindal comes up with a plan to capture the D'roz city and its technology. Along the way they have 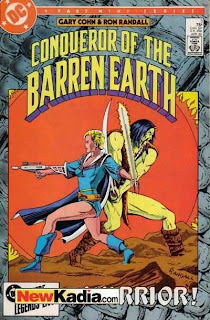 to fight through an Earth native species of the Qlov, though they're smaller than the space faring ones. Once the D'roz city is captured Jindal kills Zhengla. Seems she wasn't over being a slave after all. Zhengla, brutal conqueror that he was, forgives her on his deathbed because his vision only said he'd conquer Earth, not rule it. He tells her to mix his blood with the mushrooms on his head, like he'd done with the oracle woman. She does and has a vision of herself leading the combined forces of the humans, Harahashan and Mulge into their own space conquering horde. This serves as a sort of teaser for future stories, though as far as I know, no more are told. In fact, the last panel of the story is a cliff hanger where a ship from Jinal's people has just arrived at Earth.

She has a second aspect to the vision, too, in which she speaks with Yisrah. He tells her the history of Earth since the majority of humans left. The D'roz were among the humans who stayed behind. They kept the technology that the other humans lost. They experimented with creating new species to survive Earth's harsh climate. They crerated not only the lizard humanoids and the Mulge, but also the Qlov, which is why they wouldn't help her fight the Qlov. Strangely, Yisrah says the humans who left periodically returned to Earth to check on the D'roz and knew of the creation of the Qlov and were adamantly opposed to it. This bit doesn't make any sense in the context of the story revelation that the Qlov were created by the D'roz. Plus, the humans who came back to check on the D'roz dressed like Captain Comet. What is it with future humans being so prudishly dressed?

Cohn and Randall have crammed a lot in 4 issues. It has elements of Planet of the Apes, Timothy Leary, Battlestar Galactica, and Star Trek (especially Enterprise). Despite all the information and elements, the actual story line of conquering the Earth seems stretched. The small amount of details of the conquest don't warrant the conquest taking so long. 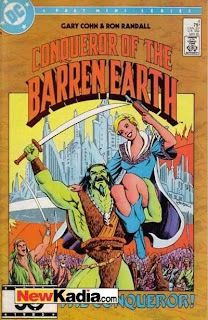 The lead character as slave/lover/killer doesn't ring true, either. I never could believe that this tough woman, who was the sole survivor of her large battle ship, would ever become subservient as a slave, and believed even less that she wold turn from being a slave into lover of her captor. He's depicted as both harsh and compassionate, depending on the needs of fulfilling his goal of conqueroring earth, and I can believe she faked the whole thing to use him to achieve her own goal of conquering the earth. Maybe the part I really don't believe is that Zhengla would fall for Jinal faking first subservience and then love. He's too savvy for that in all his other relations. Even if I give some leeway to the character being influenced by his magic mushroom vision showing Jindal as his mate, the Zhengla/Jindal relationship never achieves willing suspension of disbelief.

But, as that's merely a means to the end in the story and not the crux of the story, I'm not too concerned about that failing. It's a good story. There's an interesting subtext to the story that's not confronted directly, and could have been in future stories. Zhengla does all the dirty work of conquering, while Jinal's only dirty work is killing him, a guy who's only supposed to be but so sympathetic. Nonetheless, she's not creating a represntative government here. She's putting herself at the head of a dictatorship. Would the writers have addressed this at some point? Beynd that issue, I would have liked to see where it would have gone with Jindal leading this conquering army. Would they have been confronted by both the Qlov and the space faring humans? Why were the Qlov an enemy? They don't seem to have done anything wrong, other than being insectoids. Are there any beings in space who don't originate on Earth? From what I can see on the net, the 4 issues can be had rather cheaply. If you'd like a good sci-fi read for about $4 or so, go out and get. Well, in this age, get on your computer and get it.
Posted by Thomm at Sunday, April 05, 2009