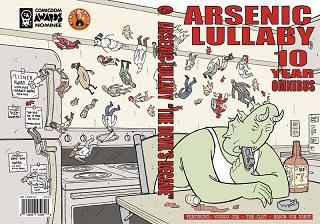 I would have never gotten this book if it wasn’t for Lee and Douglas Paszkiewicz. See Lee and I were roaming around at the Baltimore Comic-Con. Lee drags me over to this guy Doug’s s table, as Doug is the writer/creator/artist of Arsenic Lullaby. “You should check this guy’s stuff out” says Lee. He apparently had been talking with Doug earlier and was now Doug’s salesman. Doug says Nazis or Boogie Man. Having tired of Nazis I opted for the Boogie Man and a four page story hooked me to plunk down $30 for the Omnibus. Doug draws a character of his from the book and signs it. Pretty cool. Doug if you read this blog ever, e-mail me as I want to do an interview with you about the book.
Now I take it home and as I said yesterday I’m moving and behind on my reading and everything else I normally do. Lee calls me, calls me – Lee hardly every calls, we communicate with e-mail 99% of the time. You have to read this book. I did and he was right. The best quote about this book is from Warren Ellis on the back of the Omnibus, where he says “God help me, it made smile.” Well I need even more help as this book made me smile, laugh and just have a god time reading, it is is funny as crap.
Of course it is also, sick, twisted, disgusting, disturbing, odd, off kilter, weird, left of center and deranged. What a great f**king book.
The book is a collection of short stories, one pagers, two pagers, and eight pagers, whatever. It has a bunch of reoccurring characters with Voodoo Joe being the character that stuck with me the most. Joe has a curse and has a Voodoo Mask as his face. His curse is to constantly reap revenge and since he has run out of people personally he now hires out to other people. One of his staples in carrying out his hideous plots are zombie fetuses that he gets from a constant supply via dumpster diving at the abortion clinic. This group of stalwart soldiers carries out his command including going into a woman so she wakes up pregnant and turning one into a replica of a teddy bear to torture a 4 year old child. Of course Joe himself is willing to chop off hands of a child for a parent’s revenge and set up a girl scout by putting pool table balls into a bin of what should be plastic balls kids dive into. I told you, it is sick twisted and perverted and oddly enough funny as hell and after awhile you actually start to feel for Joe as he would prefer to not be cursed.
We also have Edgar Beyes, the field agency for the Census Bureau. See the Federal Government is a precise instrument that is balanced perfectly (already making me laugh) and any baby born after the Census is upsetting the precise distribution of government services and programs. Edgar’s job is to kill the children born after the census. So aborted fetuses as zombies and a murderer of children, about as low on the totem pole of things that should be funny, yet again Douglas succeeds. Over time Edgar and a fellow agent got all hot and heavy and the conflict causes Edgar to take a new job. We also have Frosty the Snowman, Jeffrey Dahlmer jokes, Baron Von Donut, The Clot and even more.
The genius of the book is to show that any topic, no matter how taboo or what we would call sick and twisted can have humor in them. Even the most despicable characters end up showing some heart now and again and instead of fearing topics we can laugh at the absurdity of them. Doug is not advocating any political position on life and death, he not making any high minded points or eschewing some philosophy, he is making fun of things that most people would be scared to make fun of and taking us along for the ride.
Truly one of the funniest books I have read. I know 90% of the women in the world would be aghast about it. Many men would be horrified and offended by the subject matter and the cavalier nature in which killing children is handled in this book. I also know that many of those people if they could get by the social mores that they were raised with and they let down their guard of righteous indignation might laugh their asses off reading this book.
If you are not easily offended and willing to see humor in anything, buy this book.
Posted by Jim at Tuesday, August 30, 2011