Hi, I’m Jim Martin and I’m an addict. Not an alcoholic, although there were a few years there where I was drinking too much, not smoking as I quit that about 15 or more years ago, and not regular comic books as I now mail those away to family and friends after I read them. It is hard cover collections and their sibling trades which I can’t seem to kick.

Over the next few months I have ordered way too many of these things and worse is I have just recently been involved in packing my collection for an impending move and I have a ton of books already. Heck I have stopped getting Creepy Archives at Volume 10, stop getting most of the Marvel Masterworks as Marvel is very thin on material that I care to see in a hard cover and I have slowed down on DC, if Vertigo doesn’t count.

In an effort to shame myself I will now justify why I want all of these collections I have ordered that are due between now and October.

Blackjacked & Pistol Whipped: A Crime Does Not Pay Primer. First off it is from Dark Horse and they are usually one of the highest quality producers of reprints. Second it is only $20, so you can’t go too far wrong. Plus it is a bit of comics’ history as it collects some of the “best” from a comic that inspired EC Comics and was a target of Frederic Wertham in the witch hunt from the fifties.

Dave Stevens: The Complete Sketchbook Collection. It is from IDW, who is the premier publishers of art books and high end collected editions. It collects all of Dave Stevens’ Sketchbooks, which were self published things he would sell at Comic Con for many years. Last Dave Stevens is one of my all time favorite artists and I could look at his work forever. His women are amazing. At $50 it is not cheap, but Stevens work is worth it.

arker: The Martini Edition. I hate IDW for this one. It collects the first two Parker novels by Darwyn Cooke in an over sized format with plenty of extras. It is $75, which is pricey, yet I’m getting it and sent the original versions onto Gwen already. These two novels were great and a chance to see the work in a large format was impossible for me to resist.

Amazing Mysteries Bill Everett Archives Volume 1. This is a $40 item and I have always thought Bill Everett was an earlier Ditko. Bill had a unique style that no one else was able to copy. His Sub Mariner art in the Golden and Silver Age was great stuff, so I want to see a collection of other work that he did. I have a book that purports to be about him and I have yet to read it. I say purport because I think some biographers may not have a lot of credibility. 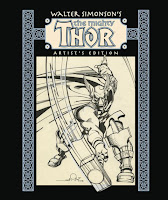 Next up is Walter Simonson’s Thor: Artist Edition for $125 from IDW. The creator of the DC Absolute Editions, Scott Dunbier has created the Artist Edition books, which essentially recreates the original artwork of an artist and is published as an oversized book. It is as close to owning the original artwork as you can get. I love the Dave Stevens book I have and this looks great also. Simonson made it easy as he almost never sells or gives any of his artwork away.

Legion of Super Heroes: The Curse Deluxe Edition. Another $50 item that collects the Levitz/Giffen run of Superboy and the LOSH from 297-313, the Levitz/Giffen era is one of the best in Legion history and I’m happy to add this to my hard cover collect.

The Steve Ditko Omnibus Volume 1 is a rather pricey $60. This collects Shade the Changing Man and almost every other work that Steve did for DC, well not everything as a volume 2 is coming out. Still Ditko is one of my all time favorite artisst and a chance to see any of his work is worthwhile, plus I haven’t re-read his Shade character in forever.

Vertigo comes in with WE Deluxe Edition for a steal at $25. Of course this was only a three issue mini-series, but Grant Morrison and Frank Quietly, I’m all for it, plus it was a great series.

Fables Deluxe Edition Volume 2. It’s only $30 and Fables is a great series.

The Secret Society of Super Villains. This is a $40 trade that is fondly remembered material that I bet does not hold up and I may have buyer’s remorse.

Halcyon Trade for just $20. A fun series that I think should read better in a trade. 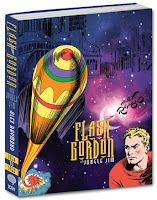 The Definitive Flash Gordon and Jungle Jim, because Alex Raymond was a god among strip artist and this stuff is being reproduced in a great over sized format for $75.

BPRD Plague of Frogs Volume 2, because BPRD is awesome and this collects a ton of material for only $35.

Creepy Presents Bernie Wrightson for only $20, because I love Bernie’s work. 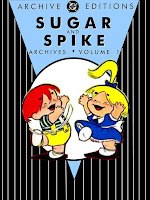 Sugar and Spike Archives Volume One for only $60 from DC, because this stuff was funny and cute and is even all age appropriate. A true trip for nostalgia.

I can justify anything, even worse there are some books I passed on. I literally could stop buying regular comics and just read what I have in trades and hard covers and probably be happy. One day I will cut down the weekly books to bare bones and then focus on just reading this material, but in the interim I need to slow down with this stuff, but this addiction is a killer for me.

Anyway I think my point is made and I have about 8 to 10 more books and trades I have ordered that are due in the next few months. I need to just say no to the hard cover and trades. When I finally can stop getting this stuff it could be a hell of an ebay sale.