Lee: Another month of indies and another month of… the ordinary? This month it appeared that the larger indie houses, Fantagraphics, 2000AD, Humanoids, etc., dominated the selections. Not much from the really, really small publishers.

Gwen: Yeah, but even with the "larger" indie publishers I wouldn't call it ordinary. There's still quite a bit a variety and while not all of it appeals to me it's always fun to look at a wider genre selection. 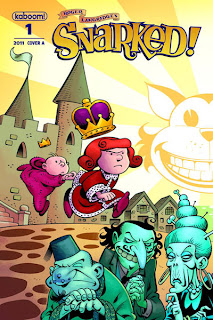 Boom ! Studios
Roger Langridge's Snarked #1 by (W/A) Roger Langridge
FIRST ISSUE! Roger Langridge is back! The Harvey Award-winner behind The Muppet Show and Thor: The Mighty Avenger returns for an all-new, side-splitting adventure that can only be explained as Snarked! Journey with Langridge as he pulls the carpet out from under such Lewis Carroll classics as 'the Walrus and The Carpenter, 'through the Looking Glass, and 'the Hunting of the Snark, creating an all-new world of humorous grandeur. Join Princess Scarlett as she and her baby brother Rusty outwit the villainous royal advisors and team up with the infamous Walrus and Carpenter to set sail in search of their father, the Red King, who has been lost at sea for six months. It's a rip-roaring industry event you won't want to miss, featuring must-have connecting covers by Roger Langridge and a special 1:10 Thor: The Mighty Avenger homage variant, by fan-favorite Chris Samnee! $3.99
Lee: It’s Roger Langridge! Need I say more? No, but I will. This is a humorous romp through all the old tales, and stories that you know so well. Think Fables but funny and you have a good idea of what you are in for.
Gwen: Fables is funny sometimes... I was more thinking of this a Fables miniaturized - like the mini-sandman character stories. Perhaps more kid-friendly. 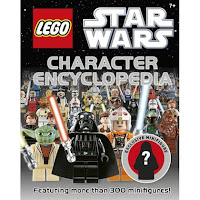 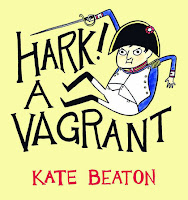 Drawn & Quarterly
Hark: A Vagrant HC by (W/A) Kate Beaton
Hark! A Vagrant is an uproarious romp through history and literature seen through the sharp, contemporary lens of New Yorker cartoonist and comics-sensation Kate Beaton. No era nor tome is left unscathed as Beaton rightly skewers the Western World's revolutionaries, leaders, sycophants, and suffragists while equally honing her wit on the hapless heroes, heroines, and villains of the best-loved fiction. Hark! A Vagrant features sexy Batman, the true stories behind classic Nancy Drew covers, and Queen Elizabeth doing the albatross. In just four years, Beaton has taken the comics world by storm with her non sequiturs, cheeky comebacks, and irreverent punch lines. Her caricatures of historical and fictional figures display a sharp, quick wit that knows no bounds. $19.95. To get an idea, read Beaton very funny strips about Nancy Drew here.
Lee: I was drawn to this because of the mix of historical facts and possibility of humor. Then I read the online pages and was completely sold. This is really funny and well worth a look.
Gwen: Okay, these are hilarious. Not a bad price for hours of laughter.

Two Generals SC by (W/A) Scott Chantler
In March 1943, Lew Chantler shipped out for active service with the Highland Light Infantry of Canada, along with his best friend Jack, a fellow officer. Not long afterward, they would find themselves making a rocky crossing of the English Channel, about to take part in one of the most pivotal military operations of World War II: the Allied invasion of Normandy. Two Generals tells the story of what happened there through the eyes of two young men, not the celebrated military commanders or politicians but everyday heroes who risked their lives for the cause. $19.99. Visit Chantler here.
Lee: Ok, this is kinda old but since it got nominated for an Eisner I felt we should mention it again. Chantler does some of the best, if not the best, historically accurate comics on the market today. Great stories, historical accurate, and fantastic art. If you have never read his material then you don’t know what you are missing. This is a good place to start.

Gwen: I swear we commented on these before. But if it's been up more than once Lee must really like it :) 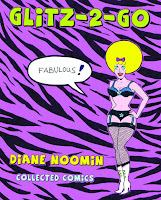 Fantagraphics Books
Glitz 2 Go SC by (W/A) Diane Noomin
Collecting nearly 40 years of comics by pioneering cartoonist Diane Noomin and starring Noomin's signature character, frustrated middle-aged glamourpuss, DiDi Glitz. All of DiDi's stories, from her debut in 1974, are finally back in print after 30 years. Like many women who wrote and drew underground and alternative comix in the 70s, Noomin's contribution to the form has been unjustly overlooked and this book goes toward rectifying that. 144 pgs. $19.99. Visit Noomin here.
Lee: I love underground comix because they are so different from anything else on the stands today. For some reason, maybe the adult content and drug references, there aren’t many collections of comix out there, so when a new one comes along I get all excited. Especially rare are collections of Wimmin’s commix. For a completely different perspective on life this is a must read and I can’t wait to get it.
Gwen: I can't say I'm particularly drawn to this genre of art or story but it does look interesting. It's a pass for me but for fans of this type of work it looks like a nice collection. 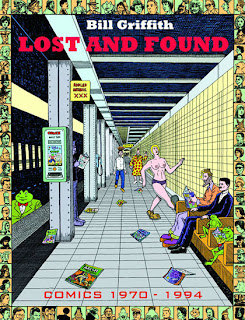 Bill Griffith: Lost and Found (1970-1994) SC by (W/A) Bill Griffith
Bill Griffith: Lost & Found collects hundreds of Griffith's seminal early underground comics, most of them long out-of-print and unavailable. The cartoons were hand-picked by the author and include an often hilarious mini-memoir of Griffith's early career. Much of the work will be unfamiliar and a real revelation to those readers who only know Griffith from his long-running Zippy strip. 310 pgs. $39.99
Lee: Honestly, half the time I don’t ‘get’ Zippy, and the other half I completely hate it which begs the question why I mention this book. I pick it because it is Griffith pre-zippy, although I am sure he will appear, in his underground comix days. Again, it’s a chance to see material that otherwise is impossible to find.
Gwen: Nope, not a fan of Zippy either. Honestly if I'm not a fan of someone's long running work I usually don't take the time to look at their previous attempts at comics. Not that there isn't some good material out there but sadly I only have so much time to read and so much money to spend. 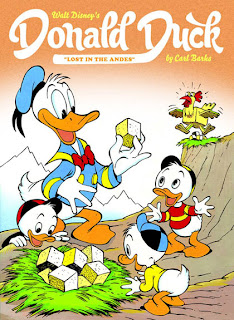 Walt Disney's Donald Duck Vol. 01: Lost in the Andes HC by (W/A) Carl Barks
The first volume in a series of affordable, full-color hardcovers collecting the complete works of 'the Good Duck Artist'! Carl Barks' Donald Duck and Uncle Scrooge comics are considered among the greatest and most timeless artistic and storytelling achievements in the history of the medium. Yet until now, his works have only been reprinted in random comic book iterations or high-end collectors' editions. For the first time, read the complete works of one of the medium's greatest artists in affordably priced hardcover volumes perfect for parents and children alike, meticulously restored and recolored to ensure the very best reproduction Barks' work has ever received. Barks began drawing the comic book adventures of Donald Duck in 1942, and he continued for the next 30 years, creating some of the most memorable comics and characters ever put to page. This first volume contains over 200 pages of vintage Barks from 1948-1950, including the title story Lost in the Andes, Barks' personal favorite, wherein Doanld and his nephews embark on a Peruvian expedition to solve the mystery of where square eggs come from. Also featured are 'the Golden Christmas Treek, Race to the South Seas, and Voodoo Hoodoo, as well as over a dozen other strips and stories. Lost in the Andes also features an introduction by noted Barks scholar Donald Ault, and detailed commentary/annotations for each story at the end of the book, written by the foremost Barks authorities in the world. 240 pgs. $28.99
Lee: I have sc versions of these stories back when they were published by Gladstone. Unfortunately, those books have long since been destroyed by the kids. But, it’s great reading not only for children but also for adults. These are some of the best comics ever and well worth the investment.
Gwen: I didn't really care for Donald Duck as a kid - more of a Goofy fan myself. But these are good kids comics for the most part :) 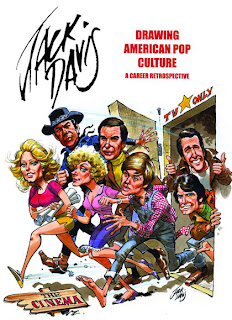 A career-spanning retrospective collating the greatest collection of Jack Davis' work ever assembled! Exploding with exuberant energy, the book includes work from every stage of his career, from his college days through work for EC, MAD, Humbug and Trump magazines to movie posters, album jacket art, proposed comic strips that never sold and even illustrations unearthed in the Davis archives that the artist himself can't identify! 192 pgs. $49.99. You can see a great online sample of Davis’s work here.
Lee: Jack Davis’s body of work, and influence, cannot be accurately defined. It’s so grand, and so incredible, and so… so… awesome that it is just amazing. As a child of the 70’s, there was no escaping Davis’s art because it was omnipresent from the covers of TV guide, to movie posters, to Mad magazine, and everything inbetween. He is a true icon of pop culture and this looks like a great tribute to him.
Gwen: As a child of the eighties I'm not really on the same page as Lee here. Honestly I'm not a fan of this art but I respect the magnitude of this artists pop-cultural dominance back in Lee's day ;)
... more tomorrow.
Posted by Lee at Monday, August 22, 2011