X-MEN #1: 20TH ANNIVERSARY EDITION Written by Chris Claremont
Pencils and Cover by Jim Lee
In late 1991, bolstered by the popularity of Uncanny X-Men’s all-star creative team of Chris Claremont and Jim Lee, Marvel launched a second monthly mutant title: X-Men! Now, twenty years later, the double-sized inaugural issue of that run is remastered, reimagined and recolored in modern style — gatefold cover and all — by colorist Thomas Mason! The X-Men’s all-new Blue and Gold teams have never looked more heroic, Magneto and his Acolytes have never seemed so dangerous, and Jim Lee’s kinetic action sequences practically leap off the page! Revisit a seminal moment in mutant history — like you’ve never seen it before! 48 Pgs./$3.99
Lee: Sadly, I remember the day this arrived on the stands. Still have 5 copies of it too, because of the different covers. But, I am pretty sure I can find a copy of this in the $1 box at my LCS. I am not sure I am ready to pay $4 for a re-colored comic. Not to mention, how can you re-imagine a reprint?

Greg: Lee, everyone has five copies of this. Once you decide you're interested in comics, mysterious men show up in your house in the night and hide them at the bottom of your closet. This is the definition of a comic that no one needs. 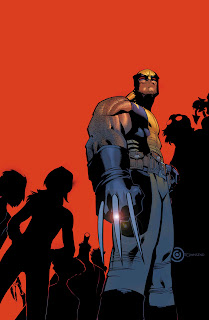 WOLVERINE AND THE X-MEN #1
Written by Jason Aaron
Pencils and Cover by Chris Bachalo
Spinning directly out of X-Men: Schism, the X-Men are split in two. In the oversized debut issue of the new ongoing flagship X-series, Wolverine takes one half of the X-Men back to Westchester to start over again. But the new Hellfire Club outlast its first day? Join Marvel Architect Jason Aaron and legendary X-Artist Chris Bachalo for a brand new action-packed take on the X-Men that will set a new standard for the Children of the Atom. 48 Pgs./$4.99
Lee: Because we need another Wolverine team book, we have it. Aaron’s work on Wolverine has been so hit/miss that I am not sure that I want this. But it’s Jason Aaron and his work on Scalped and Punisher Max is so good that I have to at least get the first issue.
Greg: I was really skeptical of Scism, but so far its been really, really good. Despite not being wild about the concept (I think Wolverine is way too overexposed), I'm actually looking forward to this. 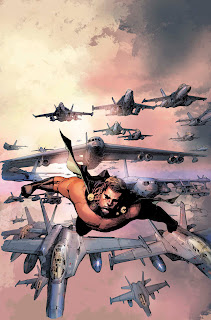 SUPERIOR #5 and #6
Written by Mark Millar
Pencils and Cover by Leinil Franics Yu
Issue #5 - The President has asked him to win the war in Afghanistan, the UN has asked him to feed the starving and the world needs saving 24/7. But Superior doesn't even break a sweat. He can handle all this in stride until his past comes catching up with him and he finds out why a 12-year-old boy with special needs was given these powers in the first place. This is a must-read issue where the mystery that has been plaguing fandom for the past twelve months is finally revealed in a shocking twist.
Issue #6 - The fall-out from last issue continues as Superior discovers the secret behind his powers. Does he remain a superhero and meet his terrible destiny? Does he give up his amazing powers and go back to life in his wheel-chair? A word to the wise: This issue contains so many shocks that more gentle readers might be unable take the pace. It also contains art which writer Mark Millar fears will make other artists go impotent. But as the story of America's number one new hero builds toward a conclusion, one guarantee is that you won't be disappointed. 40 Pgs. (each)/$2.99 (each)
Lee: Ok, so the last issue came out in March, but that’s ok because we are getting two issues in the same month now. Sadly, I was more surprised the first 4 issues came out in a timely fashion than the delay between issues. The ending to Millar’s other series, Nemesis was weak, so I am hoping this one is better. It started better so I think the conclusion should be good.
Greg: I thought this was one of Millar's better efforts when it started out, but subsequent issues lead me to think this is going to be just another piece of the cynical, boring, mailed in chutney he's been churning out for years. 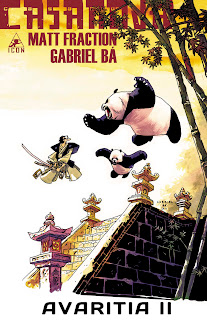 CASANOVA: AVARITIA #2 (of 4)
Written by Matt Fraction
Art and Cover by Gabriel Bá
The true identity of megasuperdupervillain NEWMAN XENO is now known to Casanova Quinn and E.M.P.I.R.E. – which means our man Casanova is now a pan-dimensional killer with one target hiding in an infinitely complex sprawl of realities. But what if something happened? THIS ISSUE: SOMETHING HAPPENS! THIRTY-TWO ALL-NEW FULL-COLOR PAGES! PRE-ORDER THIS BOOK! If your retailer can't read your mind, you can't read CASANOVA! And why would you want THAT? IT WOULD BE AWFUL. 40 Pgs./ $4.99
Lee: It’s Kung Fu Panda done as it should be! I am all over this. Actually, I was all over the last issue too so it’s not all that new to me.
Greg: Read this oh please read this oh thank god this book is back. 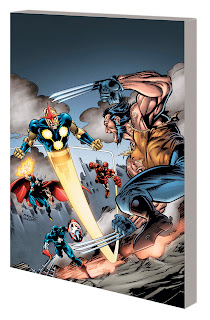 NEW WARRIORS CLASSIC VOL. 3 TPB
Written by Fabian Nicieza
Penciled by Mark Bagley and Steve Epting
Cover by Mark Bagley
The New Warriors have barely had time to get used to being a team, but the threats don’t stop coming! The Sphinx rewrites reality in his image! The Hate-Monger sets out to corrupt humanity! Terrax wants to destroy the planet! And Psionex seeks revenge! Good thing the young heroes have friends like Namor, the Fantastic Four, the Silver Surfer and the Avengers! Collecting New Warriors (1990) #11-17 and Avengers (1963) #341-342. 216 Pgs./ $24.99
Lee: I love these New Warriors collections. It is super hero paint by numbers that is just out and out fun. It’s interesting to compare this material, from the 90’s, with material from the Silver or Bronze age, and even today. I think it is closer to Broze age stories with lots of action and lots of subplots that continually get updated. It’s a little different from today’s material because most of the subplots are wrapped up within a year. No matter what, it’s great stuff that really entertains you.
Greg: There's alot of people that remember this very fondly. I do not remember it at all and I'll confess it has little appeal to me. But opinions like Lee's are very common about this book. So if you can remember a time when superheroes based on skateboards were something that actually got published, then this is the book for you. 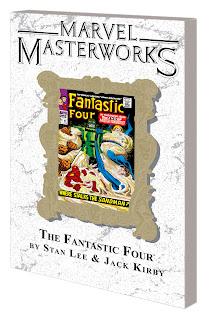 MARVEL MASTERWORKS: THE FANTASTIC FOUR VOL. 7 TPB
Written by Stan Lee Penciled and Cover by Jack Kirby
Continuing the unmatched Lee/Kirby Fantastic Four run, this volume kicks off with the return of the infamous Sandman and the debut of Blastaar, the Living Bomb Burst. Then, Mr. Fantastic finds himself lost in the Negative Zone — and only Triton, the Inhuman, can save him! Next, it’s the debuts of Ronan the Accuser, Kree Sentry 456 and the Supreme Intelligence. If that wasn’t enough, the utopian scientists of the Enclave unleash the golden being known as “Him” (a.k.a. Adam Warlock) upon the world. And to take us out on a soaring note of nail-biting drama just after the FF come together under the announcement of Sue Richards’ pregnancy, the ever-lovin’, blue-eyed Thing tells his teammates to take a powder — leaving them to face the Mad Thinker and his awesome android on their own! Collecting Fantastic Four (1961) #61-71 and Annual #5. 304 Pgs./ $24.99
Lee: Ok, this isn’t the best stretch of FF that Stan and Jack did. By this point, Jack was pretty upset by not getting any writing credit, so the new characters and creations just stopped. It doesn’t mean it isn’t any good, just not as awe inspiring as issues 40-60 were. But, these issues are packed with Kirby art when he was absolutely at his peak and non stop action. I’ll be getting this for the kids because it’s that good.
Greg: C'mon, its Lee and Kirby on the FF! Do you need us to tell you whether this is worth looking at?
Lee: Overall another good month. I am looking forward to the end of Superior, and the New Warriors trade. How's that for some extremes?
Greg: I suspect once we get the end of Superior, we'll also get the return of the charm that has made Lee famous.
Posted by Lee at Thursday, August 18, 2011