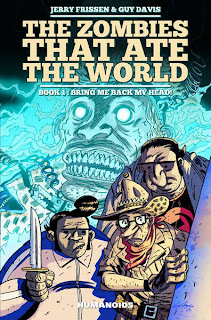 Zombies That Ate the World HC by (W) Jerry Frissen (A) Guy Davis
In Los Angeles in the year 2064, the dead have risen and corpses live again, cohabitating among us - well, somewhat. As a zombie apocalypse engulfs America, we follow a group of friends on a their journey to start a little business of they own, zombie catcher. Unfortunately, the job isn’t that simple: not only are zombie’s dead bodies walking, but they also have a terrible scent and an awful sense of humor. As a matter of fact, zombies just don’t care about anything, for their lives are behind them and they have an eternity to enjoy. Written by Jerry Frissen and illustrated by Guy Davis (B.P.R.D., The Marquis: Inferno), the two creators collaborate here to pay homage to the zombie genre, giving us a hilarious black comedy that will want you starved for more! Collects the first 4 issues of the DDP/Humanoids serial. $24.95
Lee: Humanoids continues to publish the cream of the European comics and this looks to be no exception. DDP started publishing this but it looks like Humanoids is going to finish it. How can you say no to a book loaded with black humor?
Gwen: I may be a little burnt out on the zombie genre - but this looks anything but run-of-the-mill. Even with the same old monsters creators can come up with some pretty cool ideas :) 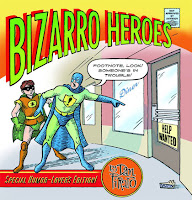 Last Gasp
Bizarro Heroes SC by (W/A) Dan Piraro
A collection of super-hero-themed comics from the award-winning newspaper cartoon, Bizarro. Cartoonist Dan Piraro skewers these masked and caped crime fighters, often revealing the true identities of these heroes: Superman lounging on the couch at home, the Hulk in his psychotherapist's office, Wolverine at the nail salon, and many more. Bizarro Heroes collects these smart, funny send-ups of all your favorite comic heroes in one incredible, amazing, fantastic volume. 100 pgs. $11.95.
Lee: Bizarro is a strip found in your newspaper and consists of single panel gags. I am always for a good laugh about superheroes and I am sure this should be full of them.
Gwen: This does look cute - but it's a pass for me. I can enjoy newspaper strips in the newspaper - or even online strips - but the collections don't hold my interest as much. You know, outside of Calvin and Hobbes. 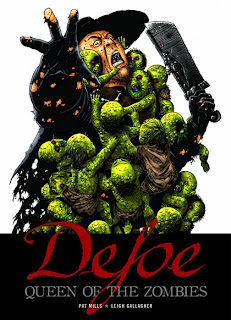 Rebellion / 2000AD
Defoe: Queen of the Zombies GN by (W) Pat Mills (A) Leigh Gallagher
London, 1669. In the years since the city was devastated by a meteor strike and the Great Fire that followed - when the undead rose from the ashes, hungry for the flesh of the living - the populace have been protected by zombie hunters like Titus Defoe, a former soldier whose mission it is to purge the ghouls. Equipped with weapons devised by the likes of Sir Isaac Newton and Robert Hooke, Defoe and his elite squad of zombie hunters must face their greatest foe: the Queen of the zombies! 144 pgs. $24.99
Visit the artist here. He has a really cool blog because he shows covers that he did, plus several "how I made this page" stuff, from script to thumbnail all the way to final colored version. Oh heck, just go here.
Lee: If you have been reading the blog for any length of time, then you know that I love alternate histories. And this one sounds great! Isaac Newton making weapons of zombie destruction? Sounds beautiful.
Gwen: Eh, this is what I was talking about. I'm burned out on the genre and this doesn't look like a comedy so it's harder to break through my zombie apathy. Maybe I'll look back at this after I've taken an undead break for awhile.

Cradlegrave GN by (W) John Smith (A) Edmund Bagwell
After serving eight months at a Young Offenders Institution for arson, Shane Holt returns to his home on the Ravenglade Estate during a long, hot summer. Plagued by the ASBO generation, the estate has seen its fair share of problems but nothing comes close to the horror that lurks within Ted and Mary's council flat. Cradlegrave is a chilling modern urban horror. 96 pgs, $22.99. Read the script and see some of the art to episode 9 here.
Lee: If you told me that the cover of a comic that had a hoodie with some blood on it would be creepy, I would have laughed at you. Then I saw this. This is genuinely creepy. And, from various places online it’s supposed to be some truly scary stuff. I’m sold. Check out the script too, it’s cool that they published it online for everyone to see. Good stuff.
Gwen: Well, I can't say I'm creeped out like Lee - but the book does seem to have a solid story from what I'm seen. Good horror comic fun.

Complete Alan Moore's Future Shocks SC by (W) Alan Moore (A) Various
For the Future Shocks series of short stories with a twist ending, Alan Moore created some of his most exciting, memorable, and explicitly entertaining work. Also featured in this outstanding collection are his short Time Twister tales - including the famous and poignant story 'the Reversible Man where one man's life is told in reverse - Moore's one-off stories, and his short Abelard Snazz series. 208 pgs. $19.99
Lee: This is a collection of Moore’s work during his time at 2000AD. It should be roughly the same time as Miracleman if I remember correctly. I have this in an earlier printing and it’s very, very good. Great art throughout and stories by Moore when he was still sane, and a normal human being.
Gwen: Ah Alan Moore before he weirded me out a little too much. Alan Moore's work during this time was excellent and this is certainly a collection worth looking at.

Thargs Terror Tales: Necronauts & Love GN by (W) Gordon Rennie, John W. Smith (A) Frazer Irving
From the deepest, darkest recesses of the Nerve Centre vaults, the eerie alien editor of 2000 AD known as the Mighty Tharg presents some horror-tinged tales in time for Halloween. In Necronauts, world famous escapologist Harry Houdini must join forces with novelists H.P. Lovecraft, Sir Arthur Conan Doyle and phenomenologist Charles Fort to defeat an unholy force which has followed him back from a place beyond human imagination! 128 pgs. $19.99
Lee: 128 pages of Irving art, SOLD! What’s it about? I don’t care. Who are the characters? I don’t care. It’s got 128 pages of pure awesomeness in the form of Frazer Irving art. That’s all I need to know.
Gwen: There's a lot of horror books today... Of course it appears Lee picked this book out for art alone. Vanguard Productions
Wally Wood: Strange Worlds of Science Fiction HC by (W/A) Wallace Wood
Tales from the Crypt and Weird Science publisher Bill Gaines called Daredevil, THUNDER Agents, and Mars Attacks co-creator, Wally Wood 'the greatest Science Fiction artist of all time. Strange Worlds collects rare 1950s Wood sci-fi comics Strange Worlds, Space Detective, Capt. Science, covers, and more. 136 pgs. $39.95
Lee: I have a ton of Wood stories and art in my collection already but the chance to see rare stories from the 50’s is just too much for me to resist. This is just one of Wood’s peak periods and should be full of good stories and great art.
Gwen: Another art book - I am a fan of shiny and pretty art - but Lee is far more of a actual comic art connoisseur than I. So You should listen to him ;) Well, about art anyway - probably not about anything else.

Lee: This is shaping up to be a really expensive month for me. OUCH! There are far to many collections of rare material that I just can’t pass up. All in super shiny hc format too which I just love.
Gwen: Sometimes I'm glad I'm broke - or I'd own way too many books. Not that I don't already have more books than shelf space.
Posted by Lee at Friday, August 26, 2011