Daryl Gregory Interview -- Writer of BOOM! Studios' Planet of the Apes Part 1 of 2 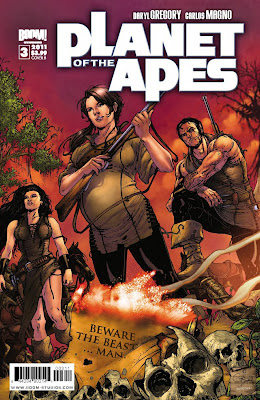 SURPRISE!!! I've been keeping this one underwraps for a month now, but I e-mailed Daryl some (re: a LOT of) questions before leaving for vacation and I just got his responses this week -- just in time to coincide with the opening of Rise of the Planet of the Apes yesterday. I hope to actually see the film today myself. (I'm working on my Aunt's AOL dial-up in Kansas right now, so I may be a little lite on accompanying images. Actually, I'm going to have to move the images above later -- they just won't cut and paste right now.) 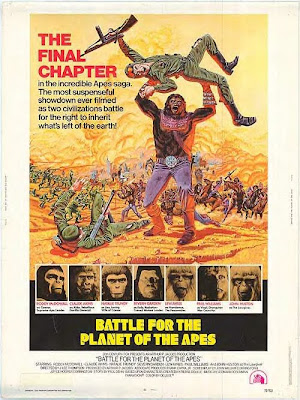 First, let’s focus on some questions about the Planet of the Apes (POTA) title itself:

Matthew: The story takes place soon after the final scene from Battle of the POTA, correct? With thousands of years of continuity to choose from, why start here?

Daryl:It's such fertile ground. At the end of Battle, the Lawgiver (played by John Huston) is telling a group of ape and human school children that they're now living in an age of peace and harmony. Maybe I'm a pessimist, but I just don't believe in utopias. I wanted to see what an ape-human society would look like, and talk about all the forces that undermine such a storybook ending.

In the first few pages of Issue #1, the Lawgiver is gunned down by a human assassin using a high tech weapon that hasn't existed for hundreds of years. I didn't want to waste time, I guess.

The two main characters are the Lawgiver's granddaughters: Alaya, the new head of the ape council, and Sullivan, the adopted granddaughter and unofficial mayor of the human ghetto called Skintown. Alaya's ready to raze Skintown to find the killer, so Sullivan has to find the killer just to protect her people. But the entire ape/human civilization is a powder keg, and the Lawgiver's death is the fuse that sets it off.

Matthew: There are a lot of strong female leads in this book (Alaya, Sullivan, and even Chaika). Do you find it easier to write women over men? Are women the rulers in this society or is it just a coincidence for these two cities (Mak and Skintown)?

Daryl:I wanted female leads precisely because it would raise these kinds of questions. Because comics are the way they are, it seems almost science fictional that there could be two women leaders in this city—when there are women who run corporations and nations today.

Matthew: I thought issue 3 was a masterpiece. You really set the reader up by focusing on Chaika and highlighting her muteness (The sign language subtitles were awesome). Then to cleverly reveal that she was the Lawgiver’s “Thus to Tyrants!” quoting assassin…Well, I was totally caught off guard. I thought the killer would remain a mystery for some time too, but I liked that you dealt with it quickly (leaving even deeper mysteries). Will she survive the gunshot wound? How can so much 21st century technology (such as her recording device) have survived this far into the future?

Daryl:Some of your questions will be answered by #4, which is out now. As for how the 21st century tech survived, that's one of the mysteries we'll be diving into.

Matthew: How many parts is the first story arc: “The Long War”? Will you delve into other eras of Ape History in subsequent arcs or just keep with this storyline? I’m fine with either.

Daryl:“The Long War” is the title for the first four issues. (The next four are called “The Devil's Pawn.”) I have an outline for the rest of the year, and for now the main action is sticking to this time period. However, we're going to be filling in the history of this world, and also let readers know what's happening around the world. After all, it's a planet of the apes. Why not cover as much ground as possible?

Matthew: Did you bring this book to BOOM! or did BOOM! bring you to this book? Or more simply, how’d you get his wonderful gig?

Daryl:I'd been doing Dracula: The Company of Monsters for BOOM! Studios, and we were finishing up that series. Matt Gagnon, BOOM!s editor in chief, called me up and asked me if I had any interest in doing the comic. Of course I said yes! I grew up watching those films.

Matthew: The series artist, Carlos Magno, is magnificent! How did he get assigned to this project? His work is so detailed. Can he meet a monthly deadline long-term or will he need periodic breaks in-between arcs? I don’t mind waiting an extra month, if he needs it. Although, it would be cool if you did a “Born on the Battlefield” type story (like they did in Dark Horse’s Conan with a different artist/storyline/era) for the “filler” issues too.

Daryl:Here's the thing: not only is Carlos an amazing artist, he's unbelievably fast. Not only is he doing pencils and inks, but he also does covers! Maybe some month he'll miss an issue, but I have to tell you, he's a machine. A machine that makes hundreds of beautiful pictures.

Matthew: How much collaboration occurred between you and Carlos on the look of the book? Even though it’s from the fifth film, it’s all stuff off camera. Did you provide detailed descriptions or did you just let him brainstorm some ideas first?

Daryl:Early on, there was a lot of conversation between me, Carlos, and the editor for the book, Ian Brill. I wanted to set the story during a new industrial age, with steam level technology and flintlock weapons. So we knew there would have to be a big smoky city, a human ghetto, and areas that were clearly designed by apes.

Carlos took those basics and ran with them. So many of the details of the world—clothing, architecture, the tools and weapons, even side characters—come straight from Carlos' brain. He puts so much detail in the backgrounds of the panels that readers get to see a complete, fully alive world.

And the coloring by Nolan Woodward! Can we talk about that? Nolan's work does so much for the mood of the book. I just saw the colors for #5, and the night scenes are beautiful and foreboding—just great stuff.

Matthew: Speaking of alternate routes or rather realities, how do you see the POTA saga? Is it an unbroken circle or is it more of a corkscrew where Zira and Cornelius travel back to 1973 in movie three, but at that point they create another timeline different from the one they came from? I’d always assumed the latter given the peaceful ending of “Battle” with the Lawgiver happily teaching both humans and apes, but you’ve destroyed that notion with his murder! : )

Daryl:This is a point that not even the characters in the movies seem to agree about! Certainly the screenwriters had different ideas. So, since none of the characters in my book know whether they're in a closed-loop are alternate timeline, then I don't have to decide either!

Matthew: Do you think the new film (Rise of the POTA) fits into that pre-existing continuity or is it a whole new “animal”? Will BOOM be creating comics related to that film and if so, will you be involved?

Daryl:Rise of the Planet of the Apes is its own, new continuity, unrelated to what we're doing in the comic. However, we are doing a webcomic that's a prequel to the new movie, that's available online.

Matthew: I understand issue 5 is only going to be a dollar and the trade of the first four issues only $10. As we close out part one of our interview, any last minute pitches to our readers on why they should be picking this series up (whether they’re ape-fanatics or not)?

Daryl:We're telling a story that absolutely does not require being an ape fanatic. We're just aiming this book at anyone who likes a tight science fiction story. However, if you are a fanatic, you're going to catch references and pick up a few easter eggs that others might miss.