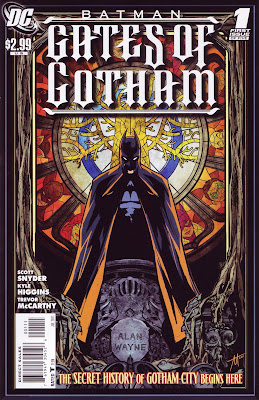 So DC’s had a busy couple months finding work for 90’s Marvel cast offs and drawing unnecessary lines on some of the most iconic costumes in comics. But while someone was coming up with the brilliant idea that knee pads are what Superman needs to appeal to the kids of today are knee pads, some crafty editor in the Bat office managed to actually sneak a good book out the door.


Batman Gates of Gotham was a five issue mini series with a plot from Scott Snyder, written by Kyle Higgins, and drawn by a couple artists, but largely Trevor McCarthy. It is the story about how a long time ago the founding fathers of Gotham (including the relatives of Bruce Wayne, the Penguin, Hush, etc.) hired two brothers to turn Gotham into a shining city of the future. Now, someone connected to those brothers is blowing up Gotham’s major landmarks and looking to settle a generations’ old score. It’s up to Batman (Dick Grayson in this case), Robin (Damian), Red Robin, and Black Bat (Cassandra Cain Batgirl) to solve this mystery and save the city.

This is a really, really good book. And save for the book’s artistic inconsistencies, I’d put it right up there alongside Synder’s Detective Comics in terms of quality. The story does a great job introducing a brand new villain in the Architect. He’s got a cool look (steampunk, which is surprisingly underrepresented in superhero books) and a cool gimmick (super strong evil architect!) to Gotham that is menacing, but not TOO menacing, which is difficult to do. If you don’t believe me, think of how Bane and Hush were the most threatening villains Batman had ever faced the first time around and subsequently became far less threatening, and often afterthoughts.

The series does a great job juggling the book’s large cast, making them all feel important to the story without feeling like afterthoughts. The book also makes the best use of Cassandra Cain in ages. One of the book’s particular highlights is the Dick/Damian relationship, which several writers have done well with, but this book exceeds in portraying. In fact, whenever Damian interacts with any of the Bat family in this book, it’s always a treat.

But most impressively, the book does a great job handling Dick. Higgins makes him seem like a different Batman without trying too hard, as Judd Winick tended to do when he wrote the character. He not only struggles with the legacy of Batman, but with the legacy of his adoptive Wayne family, which is a connection that rarely gets remarked upon. It’s a fantastic series and I would absolutely LOVE to read more of this. It even ends with Dick saying he feels like he has shown he CAN be Batman. But of course we can’t have that, because DC is about to bring back the Silver Age … TO THE XTREMEEEEEEEE!

This is one of the best books I’ve read this year and it is also one of the most frustrating. This probably does a better job showing Dick as Batman than anything DC has published AND it is some of the best Bat family interaction we’ve had in ages. And we know none of it will be followed up on because of the reboot! ARRRRGH.

Ok, there are some positives to look forward to. This is a great Dick Grayson book and the author will be running the new Nightwing title, and that’s something to be genuinely excited about. Also, it looks like the Architect is going to figure into Synder’s Batman run. I just wish I could read more about Dick as Batman not just from this writer, but from this artist. Trevor McCarthy deserves kudos from this book. Whether its exploding bridges, disarming a bomb underwater, Tim and Cass flirting, or Batman fighting a crazy dude in a diving suit, he does a great job drawing it and he does it with a fluidity that suits a book about an acrobat. Here’s hoping we see more of him soon.

When this book gets released in trade you should totally pick it up. It didn’t deserve to be a side miniseries before an ill advised reboot, it deserved to be the start of an ongoing run.