Jim: I’m still burnt out from our September posting but it was enjoyable to see everyone else have comments on stuff also. Onto October and see if DC has anything left in the tank or if I do. Note I was trying a different approach for a few months, but will take a rest this month by going back to basics, pick a book and comment, pick a book and comment, wash, rinse, repeat.
Gwen: I'm still burnt out as well and overall I'm sad about the relaunch. The more I read the current DC stuff the more depressed I get - I'm really going to miss Stephanie as Batgirl. 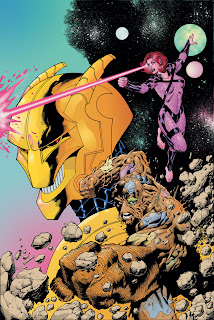 MY GREATEST ADVENTURE #1
Written by AARON LOPRESTI, KEVIN MAGUIRE and MATT KINDT
Art by AARON LOPRESTI, KEVIN MAGUIRE, MATT RYAN and SCOTT KOLINS
Cover by AARON LOPRESTI
On sale OCTOBER 12 • 1 of 6, 40 pg, FC, $3.99 US • RATED T
The adventures of Garbage Man and Tanga from WEIRD WORLDS continue – and now, these offbeat heroes are joined by the Robotman, who has a disturbing knack for self-destruction!
Jim: An anthology title. I give kudos to DC for continuing with this format, but I dropped Weird Worlds which had two of the same three characters. Matt Kindt is the only draw for me and my love of Robotman, but for $4 it feels like a pass.
Gwen: Eh, can't say I'm terribly interested. I also lack Jim's love of Robotman. ACTION COMICS #2
Written by GRANT MORRISON
Art by RAGS MORALES and RICK BRYANT
Cover by RAGS MORALES
Variant cover by ETHAN VAN SCIVER
1:200 B&W variant cover by RAGS MORALES
On sale OCTOBER 5 • 40 pg, FC, $3.99 US • RATED T
Retailers: This issue will ship with three covers. Please see the order form for more information.
In his weakest moment, Superman is taken down – but by whom? And if the world wasn’t ready for a man with super powers, they’re utterly unprepared for the rage of a Superman cornered! The cornerstone character of the new DCU continues his debut adventure!
Jim: This is going to be an interesting book and one that has implications for a lot of the DCNu. I’m just confused with the DCNu timeline at this point. How all the parts fit together is a mystery but Morrison and Rags on a book should be good. I know Grant has tons of ideas for Superman and has waited years to get a crack at the character. All Star Superman was great; I hope this is close to being as strong as that series.
Gwen: It's going to be hard to really know what this is all about until the new Action Comics actually starts coming out. So until then it's hard to have an opinion. 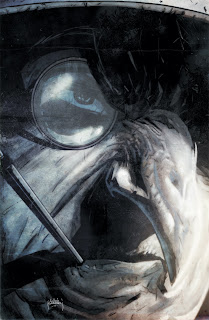 PENGUIN: PAIN AND PREJUDICE #1
Written by GREGG HURWITZ
Art and cover by SZYMON KUDRANSKI
On sale OCTOBER 5 • 1 of 5, 32 pg, FC, $2.99 US • RATED T
In this exciting new miniseries from novelist Gregg Hurwitz (You’re Next) and rising star artist Szymon Kudranksi (Spawn), the painful and dark past of one of Batman’s most devious foes is examined. How did young Oswald Cobblepot go from being the apple of his mother’s eye to the leader of underworld gangs and adversary of The Caped Crusader? Find out in PENGUIN: PAIN AND PREJUDICE!
Jim: The Penguin has gone from being a maybe of Batman’s rogue’s gallery to being almost an equal member of the Gotham elite. The Gates of Gotham made the Cobblepot family part of the elite structure of the city and Penguin is always around Gotham in the last few years. In some ways he is now Batman’s Lex Luthor, a foe who has a public face of being a business man. I’m signing up for this book.
Gwen: This does look pretty neat - in some ways I'm more easily sold on mini-series because there's less pressure for them to keep going indeterminately. 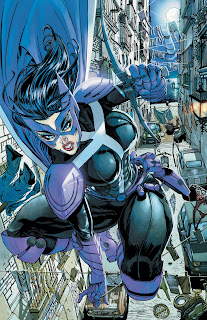 THE HUNTRESS #1
Written by PAUL LEVITZ
Art by MARCUS TO and JOHN DELL
Cover by GUILLEM MARCH
On sale OCTOBER 5 • 1 of 6, 32 pg, FC, $2.99 US • RATED T
Look out! By the end of this hot new miniseries, the Huntress will have the largest price on her head in DC Universe history.
What will the Huntress do that warrants such a death mark? And who puts it there? The jaw-dropping events will be revealed as the Huntress heads home to Italy and embarks on a mission that defines her life. Don’t miss out, because this story will tie in to upcoming events in BIRDS OF PREY!
Jim: This should be a no-brainer as I like the Huntress character, but Levitz Legion has been uninspired and Marcus To and John Dell are more on the super hero generic side. I’m sure I will succumb to my love of the character, but my brain says this should be a pass.
Gwen: Hmm, I am faced with the same dilemma as Levitz has made me cringe at most every new issue of the Legion. I can only hope he does better with Helena. 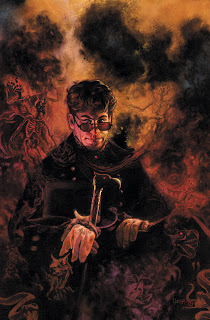 THE SHADE #1
Written by JAMES ROBINSON
Art by CULLY HAMNER
Cover by TONY HARRIS
1:10 Variant cover by CULLY HAMNER
On sale OCTOBER 12 • 1 of 12, 32 pg, FC, $2.99 US • RATED T+
Retailers: This issue will ship with two covers. See the Previews order form for more information.
James Robinson returns to the world of his acclaimed STARMAN series with a new 12-issue series starring the antihero known as The Shade! An attack at the Starman museum kicks off a globe-hopping, centuries spanning quest that will irrevocably change The Shade’s life, and ultimately shed light on his true origin! Artist extraordinaire Cully Hamner (RED) kicks off the series, and upcoming issues will feature art by such luminaries as Darwyn Cooke, Javier Pulido, Jill Thompson, Frazer Irving and Gene Ha!
Jim: This is a series I have hoped to see for years. Shade is one heck of an interesting character that is at times one of the most evil villains and has also been a friend to the Knight family. Lately James Robinson has not been wowing me, but this character was one that he truly put his heart and soul into and I think this series will be a hit.
Gwen: I'm looking forward to this. I don't know as much about Shade as Jim but I look forward to finding out more. It looks like a cool concept for a book regardless. 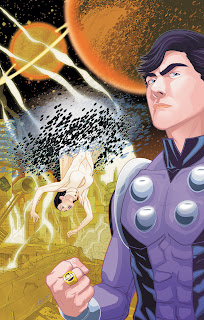 LEGION: SECRET ORIGIN #1
Written by PAUL LEVITZ
Art by CHRIS BATISTA and RICH PEROTTA
Cover by TOM FEISTER
On sale OCTOBER 26 • 1 of 6, 32 pg, FC, $2.99 US • RATED T
Retailers: Please see the Previews Order Form for a special offer on Legion of Super-Heroes promotional rings.
The architect of today’s Legion of Super-Heroes, Paul Levitz, delivers a science fiction odyssey on a scale you’ve never seen in a new, 6-issue miniseries!
The broad strokes of the Legion’s origin are well known, but you’ve never seen the secret machinations that went on behind the scenes! Why was the organization known as the United Planets formed? Who tried to kill R.J. Brande the first time? And what great power could leave entire planets desolate and lifeless? Cosmic Boy, Saturn Girl and Lightning Lad may have founded the Legion, but the story starts here!
Jim: Last thing I want to see is more retro-coning of the LOSH. This group has such a convoluted back story now that going forward is the best cure. Still as a diehard LOSH fan I will get this book, but I’m going in complaining.
Gwen: I wish someone else would write this - as it is I almost want to avoid it. It'll probably just make me cry.