The Killer Vol 2 - Reviewed by a non Comic Guy

Hey boys and girls Jim is taking a week off - moving your house is a messy process - so instead we have a guest post from Ben.

My coworker Jim Martin, well know to everyone on this site, sent me a link to this blog a month or two ago. I had known Jim was a large comic book fan since I started working with him a year or so ago, his office is covered in action figures, and he lends out comic books to the nerds I work with all the time.
One morning to pass the time I casually asked if he had any of those EC Comic books, Tales from the Crypt, which I had as a kid and really enjoyed. To my surprise he did and when I came in the next day one was sitting on my disheveled desk. Clearly this guy was hardcore, since after I returned it the next day he mentioned he had the additional four volumes in the crappy series, that we're now mine for the borrowing if I wanted. 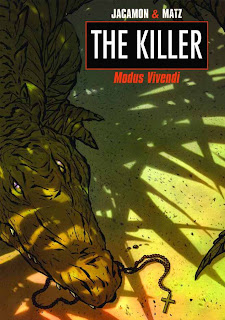 I didn't, but I respected his generosity, and from then on Jim was upgraded from ' creepy coworker who collects dolls' to 'acquaintance who is still kind of weird.' One day, desperately bored and willing to do anything to avoid actually working, I asked him if Watchmen was the best comic of all time, he replied it was not and the next day brought me 'The Killer.’ After reading it, I again decided work was less important than comic books and got the link to his blog. It then became apparent Jim's hobby was less a hobby and more an obsession, and that the Captain America replica shield in his office wasn't a gag gift.
So imagine my surprise when Jim, out of nowhere, asked if I would write a guest spot. Apparently he thinks that I am “so funny and awesome and good looking.” Well I could hardly turn him down after that! Now, I just needed a comic book to review. This was tricky, as I only own one comic book, The Watchmen, and have no idea where to even start in the medium. Save for those Tales From The Crypt comics, I hadn't read a complete comic in years, and a review of TFTC was out, because "it sucked" just wouldn't cut it and I felt obligated by other things to get at least a paragraph in. Then I remembered, after lending me the Killer and getting a positive reaction, Jim had lent me Volume 2. Which I had promptly put in my bookcase with the intent of stealing after Jim forgot he gave it to me. Perfect, I read it that evening.

So now that the introduction has (finally) over with, I can get to the review.

The Killer: where to begin? With a checklist covering the basics? Ok, that sounds easy. 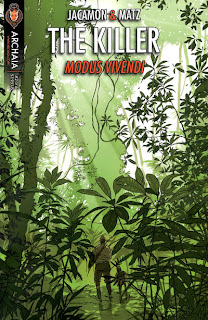 The artwork is nice, very well drawn, with intense, mood setting colors. The images in the book were memorable and the plot extraordinarily well paced. The dialogue boxes flowed in a unique manner that even a novice such as I could appreciate, and the characters, though not really believable, made sense in the world the story occupies. So- interesting plot, functional layout, dialogue that didn't completely suck. Check. Extra checks for all the nudity and extra check pluses for the dozens of head shots splattered throughout the pages. But let me stop the check train before we get all crazy, you can check off the basics for most published stories, and they still suck. Mediocre entertainment meets the above requirements all the time, and no one's gonna be talking about it in ten years. I was given this book with the expectation of greatness. Yeah, The Killer is good, but what's the difference between 'mediocre' and 'great'? What separates movies like 'Ghost Rider' and 'Dark Knight'?
I shall tell you that tomorrow…
Posted by Lee at Monday, August 08, 2011