The Week in Review – August 24

Where the heck have I ‘m been you may be asking or maybe you were hoping that I had finally had enough of pontificating and just quit. Nothing, so dramatic we (my wife and I) are in the process of trying to relocate to Florida. Not for retirement or anything else, but because that is where my wife wants to live and heck it has lots of pluses for me also, happy wife,  work from home (I hope), my daughters and their husbands are all in Florida, heck we even sent my dog to Florida already. So in the interim we are living in a condo since our house sold as we arrange the other pieces to get the whole move over with. All of that has caused me to have limited internet and I still have less access to the internet since I’m working off a tether from my iphone. Now that I have bored you with the details of my life let’s dive into what has been going on in comics. 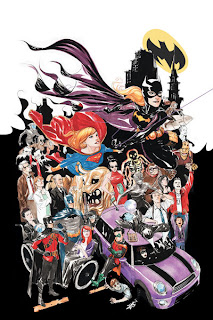 The end of the DCU has been going on. For me this has been rather sad. DC has had a ton of soft reboots over the years with Crisis on Infinite Earths, Zero Hour, Byrne restart of Superman, the extremely soft reboot of Jason Todd in Batman and Batman Year One, One Year Later and other things, but nothing as dramatic as this. Marvel’s sliding scale of time slowly kills the characters for me, but this is bothering me a lot as any history or continuity I know of the characters is now totally up in the air. I have read a little of the interviews and plans but have almost purposely ignored the whole thing so I can come into the new DCU clean. DC keeps saying it is a re-launch and not a reboot, but it is obvious that Flashpoint is their gimmick to try and realign their Universe and they are trying to keep what they think fans like and fix what they thing needs fixing. The last issues of many of the books were killer as the writers were giving a last hurrah and they previewed a bunch of ideas they had for the books they were writing and I really want to read those JLA Adventure and the Batgirl stories. On the other hand the end of the current Superman stuff, Teen Titans and some others is a mercy killing. The problem I have is that any history I think I know about anybody is suspect. This is what Marvel did to Amazing Spider-Man with One More Day and DC appears to be doing it with their whole line.

I have every intention of picking up all the number one issues and I have about four or five I may drop after issue #1, but if the history of these characters is totally rewritten I may have to leave the DCU for a period of time. I no longer have the desire to learn anew about these characters in a new setting. Putting Cyborg in the JLA is fine, but if Green Arrow is broken, why re-start him as Ollie again, Dick is Nightwing and Babs is Batgirl, been there and done that. I know I’m a broken record but going forward is always better than going backwards. It all feels like a mistake. No matter Scott Snyder will deliver great books and Grant Morrison will make us scratch our heads wondering what is up with Superman, because talent is talent. But Lobdell and JT Krul have yet to deliver books I can’t wait to read and I doubt they will now.

The Flashpoint mini-series came to an end and for the most part they were enjoyable reads, Kid Flash being the worst of the books put out. Each story moved fast, explained stuff as it went along and delivered decent entertainment. What they lacked was strong artwork. Except for Batman and Superman many of the series were drawn by artist that many independent publishers would have passed on. The art was at times generic and lack strong story telling skills. As I’m sure these books were all full scripts that saved the day for these artists. I know the minor leagues guys were all pulled up to the majors to give a cushion to get the new DCU going, but some of the art looks like it was really rushed and often amateurish at best.

Thankfully we still have some Vertigo books, but with House of Mystery ending, DMZ ending, Northlanders wrapping up and Scalped coming to its end, I fear for the long term health of that line. I wonder if all the changes DC made to those books will relegated it to more of the Icon type line Marvel has in place. At least we have great series like American Vampire, Sweet Tooth and Fables, but since Willingham does not have any regular DCU work I’m guessing even Fables maybe headed to a new home one day.

Marvel is killing me as they have some very good books with Daredevil, Captain America, Captain America and Bucky, Punisher, PunisherMax, Criminal, Uncanny X-Force and other stuff and at the same time they are churning out tons of crap associated with Fear Itself and are announcing a bunch of .whatever books for no real rhyme or reason other than to apparently flood the market with product. Marvel is insane with their reprints which now flood the market so bad that the sales on their stuff is so cheap and done so fast there is no incentive to buy the collected editions when they come out. Except for the Omnibuses, which are now being overdone, you can buy almost any Marvel collection for half price or less in a couple of months of their release. Very few comic stores can stock that stuff.
Well my return column was not so much a week in review, but more of a rant as to the current status quo of comics. The two books that stood out as excellent examples of great material this week were American Vampire #18 and Captain America and Bucky #621.

American Vampire was the conclusion of the WWII story involving Pearl and Skinner going fang to fang. The crux of the story was the reveal that Skinner has a thing for Pearl and she apparently has underlying feelings for Skinner. The story ends with Skinner being dead and Pearl and Henry back together and apparently as strong as ever. Of course Skinner is not dead and must have survived Pearl’s stabbing of him with a golden dagger, one of the AV’s weaknesses. So we know that this is not over between them. Also we know Pearl is eternally young as a Vampire and will outlive Henry so the specter of a Pearl/Skinner team up is certainly a strong possibility for the future. I hope this series continues its time jumps and gets to today and beyond as the progression of the series is as fantastic as the story and art. I can’t wait for the next arc that goes back before Skinner was a Vampire and has art by the great Jordi Benet.

Captain America and Bucky was Part II of the story of Bucky. This issue tells the tale of the first time Bucky kills someone. Bucky is a young kid who knows of death, but from a distance, he understands the loss, but taking a life is different. We get a great adventure of Cap and Bucky shutting down some saboteurs trying to gas and kill some American soldiers in the USA. Classic fifth column action like the golden age books showed, but no cartoon like death for a bad guy, Bucky has to throw a knife into the guy’s neck to stop the plot. It does not preach but it lets you know that something fundamental has changed in Bucky. Chris Samnee is brilliant as always. He is so deceptive because more photo realistic work usually feels like it has more to it, but Chris’ work is incredibly in conveying emotion, flow of the story, details and he just flat out rocks.
Next week’s list is almost barren since DC has only decided to release two books, but I’m still getting more than enough, The list is Flashpoint, Justice League, Steve Ditko Omnibus, Amazing Spider-Man (not liking Spider-Island), Iron Man 2.0, Mighty Thor, Secret Avengers, Spider-Island Deadly Hands of Kung Fu (collection please), Ultimate Hawkeye, Uncanny X-Force, Invincible, Vescell, Creepy Bernie Wrightson Stories, Eerie Archives, Goon, Locke & Key, Vamperilla, Warlord of Mars Fall of Barssom.
That’s a wrap, see ya next week.
Posted by Jim at Monday, August 29, 2011