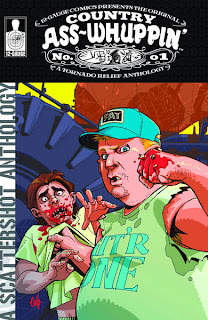 12-Gauge Comics
Country Ass Whuppin: Tornado Relief Anthology (One-Shot) by (W) Aaron, Flanery, Edmondson, Various (A) Pearson, Stelfreeze, Latour, Various
Many of the industry's finest creators, all with roots or ties to the south, have banded together and donated their time for a uniquely southern anthology. Enjoy both tall-tales and true stories, told by some of the best in the business; including Jason Aaron, Sean Patrick Flanery, Cully Hamner, Brian Stelfreeze, Rebekah Isaacs, Jason Pearson, Nathan Edmondson, and many more. Don't miss this celebration of southern culture, while having fun and helping those in need. 100 of the proceeds from this book will go directly to the Red Cross Disaster Relief Fund. $5.99
Lee: Wow! Check out the names associated with this book. That is just amazing. This looks to fantastic. And all the proceeds go to help those in need. A win-win for everyone.
Gwen: It does look like a good collection of creators. It's always nice to see charity comics as well - although it's an interesting theme for a book donating proceeds to the Red Cross. 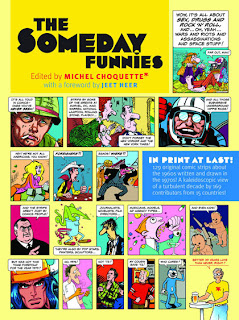 Abrams Comicarts Someday Funnies HC edited by Michel Choquette
The Someday Funnies is the long-awaited collection of comic strips created in the early 1970s by world-famous artists and writers such as C. C. Beck, René Goscinny, Harvey Kurtzman, Jack Kirby, Moebius, Art Spiegelman, and Gahan Wilson. What started out as a special insert for Rolling Stone took on a life of its own as writer/editor Michel Choquette traveled the world, commissioning this visual chronicle of the 1960s, only to find himself without a publishing partner or the financial support to continue. Forty years later, readers finally get to experience this legendary anthology as Choquette celebrates the birth, death, and resurrection of The Someday Funnies - 129 previously unpublished strips by 169 writers and artists. 216 pgs. $55.00
Lee: This is expensive but my understanding it is some of the top creators in the world writing about the world in comic strip form. Think DC’s recent Wednesday Comics but with a whole lot more reality. This is expensive but the change to see something so highly regarded, and unpublished, for so many years is something that I can’t pass up.
Gwen: Pass for me - I don't get all that much enjoyment from strip comic format. 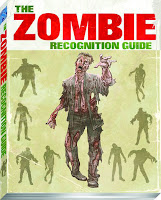 Antarctic Press Zombie Recognition Guide GN by (W) Fred Perry (A) Fred Perry, Joe Wright, Ben Dunn
Whether you're a professional hunter, an amateur spotter, or just some poor schmo trying to avoid having his brain eaten, this comprehensive guide is an indispensable tool! Learn standard silhouettes, habitats, weaknesses (NOT always the head!) and more for all types of walking dead, from radiation-spawn to genetic accidents to voodoo slaves! $14.95
Lee: I am pretty sure that I don’t need a book to recognize a zombie. I’m not saying this isn’t a good idea, lord knows we need more books like this, but… ummm… shouldn’t zombie recognition be pretty obvious?
Gwen: I don't know - I think that this is the perfect Christmas gift for one of my friends. 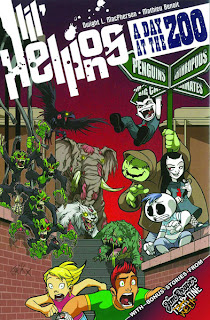 Arcana Studio Li'l Hellions GN by (W) Dwight L. MacPherson (A) Mathieu Benoit
A day at the zoo for a group of kids is no cause for alarm - unless those kids are from the bowels of Hell. Join Jim Reaper, Louie, Lucy, and Boog for a trip to the zoo! It doesn't take long for the trip to turn into bedlam, and it's up to Jim to save the day - that is, if he can control his bowels long enough$14.95
Lee: For those that don’t know, Dwight MacPherson was one of the first creators to befriend the blog. We talked a lot. We plugged his books because they were good and not because he was our friend. Then Dwight hit the big leagues. Now, he doesn’t write. He doesn’t call. There’s just nothing. It’s hard to believe, but I got used for my blog! If you’re still out there Dwight, it’s ok, we still love ya! *sniff* Even if you treat us bad. *Sniff* *Sniff*
Gwen: I really like the art for this book. Cartoony but endearing. Also, like Lee said - good creator :) 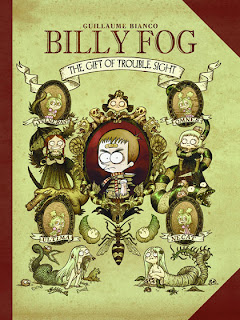 Archaia Entertainment Billy Fog: Gift of Trouble Sight HC by (W/A) Guillaume Bianco
Like some other kids his age, Billy Fog has to wear glasses. But when he takes his glasses off, he sees all the things that other kids can't: ghosts and ghouls, vampires and monsters, a world of darkness and danger and above all the thing that kids aren't supposed to see: death. A new kind of graphic novel: part storybook, part fable, part gazetteer and bestiary of the horrible and fantastic, inspired by the likes of Tim Burton and Lemony Snicket. 144 pgs. $24.95. Visit Bianco’s blog here.
Lee: Translated from French, this looks to be a ton of fun. Knowing French comics now, I am pretty sure this should have a level of creepy, and monsters-eating-children (all in good fun of course), that is unseen in American comics. This should be great!
Gwen: This looks excellent. Of course I'd wear my glasses a lot more if that's what I saw without them.

Black Fire HC by (W/A) Hernan Rodriguez
Two soldiers in Napoleon's army retreating from his disastrous campaigns in Russia are separated from their unit by a Cossack attack and stumble across an isolated Slavic town, where strange and bizarre doings are afoot. The ancient town is deep, forbidden territory, the prison of a dark monster-god out of Slavic legend and nightmare, which seeks to use the newcomers to escape. An historical horror story in the vein of HP Lovecraft and Brotherhood of the Wolf. 160 pgs. $24.95
Lee: This certainly looks different. There are many books out there that have Slavic influenced monsters, that’s for sure. Rodriguez, from what I can tell, has a hard angular style that should fit the material well.
Gwen: The art work is certainly different. The color for the cover alone is somewhat hypnotic. 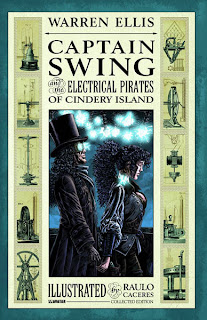 In the London of 1830, newly-minted copper Charlie Gravel keeps seeing things he's not supposed to: a crooked Bow Street Runner with a flintlock revolver, high-flying vessels that are not supposed to fly, and the violent Scientific Phantasmagoria popularly known as Spring-Heeled Jack. With the coming of Captain Swing and his Electrical Pirates, history shall never be the same! This crackling new graphic novel is illustrated by Raulo Caceres in a stunning woodcut style, capturing the classic literary feel from days of yore. Available in softcover and hardcover formats, with illustrated covers by Raulo Caceres. 128 pgs. $17.99
Lee: This is a strange book for me. On one hand, typically I love everything Ellis and I want to get it. But, recently, his Avatar material has been hit, and mostly miss. Not to mention this is really late and has long since lost any buzz it might have had. I will likely get, I just wish I was more confident in the material.
Gwen: It's hard to not be drawn to something with pirates- even electrical ones. Well, at least it is for me! 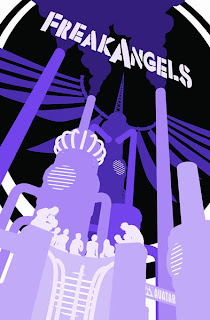 Freakangels Vol. 06 HC (Ellis & Duffield signed edition) by (W) Warren Ellis (A/C) Paul Duffield
Twenty-three years ago, twelve strange children were born in England at exactly the same moment. Six years ago, they used their psychic powers in unison and accidentally flooded the world. Today, they live in and defend Whitechapel, perhaps the last real settlement in soggy London, from the evil machinations of one of their own - a FreakAngel gone rogue. But when Mark, the bad seed, returns and forces his old friends to expand their consciousness beyond all concepts of space and time, they discover there's something coming something dark and terrible beyond the borders of Whitechapel, closing in for the kill. Writer Warren Ellis and artist Paul Duffield proudly present the last stand of the FreakAngels in this final, gorgeous sixth volume of the 2010 Eagle Award-winning online web comic! Available in softcover and hardcover formats, with illustrated covers by series artist Paul Duffield. Also available as a special Signed Hardcover featuring the signatures of writer Warren Ellis and artist Paul Duffield and limited to just 1000 copies! 144 pgs. $39.99. You can read the series online here.
Lee: And speaking of continuing Ellis series, we haven’t talked about Freakangels since it started. It’s obviously going strong and I think our friend Shawn still reads it. But, again, there’s never any hype, there’s never any buzz, it’s just there. I need someone to tell me that I am really missing out before committing to this one.
Gwen: Honestly I didn't even know that this existed, which is a shame because it sounds pretty cool.


I should run out of words sometime tomorrow... hopefully.
Posted by Lee at Tuesday, August 23, 2011