The Week of July 27 in Review

What a week it has been, madness at work, packing up our house for an impending move, loss of a pet for my one daughter, impending motherhood for another daughter so stuff is going on everywhere. A mad week, so I was almost hoping there would not be too many books I wanted to talk about, I was wrong. It was a great week with lots of good stuff, so let’s get into it. 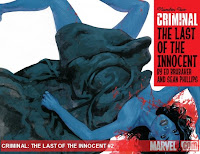 Criminal The Last of the Innocent #2 was another great issue. Archie’s plan to kill Veronica was so well done, I’m sorry I mean Riley’s plan to kill Felix was amazing. Not only are we getting the story of how he is planning the murder and his alibi we are getting the emotional content of what is in Riley’s head. Mapping this story on top of the old Archie stories allows Brubaker to play with what we know and at the same time make those stories have vibrancy and a reality bent to them like never before.

It also allows Sean Phillips to show off two styles of artwork aping the innocent style of the Archie books for the flashbacks and hitting the noir for the present. What is especially impressive is in a collaboration that is always been well done, this is looking to be the best of the Criminal stuff ever done.

Snyder continues to impress with Detective #880. The story of James Gordon Jr. is lost in the beginning of the story as Batman tracks down the recently escaped Joker. With all eyes on that danger we forget who the true villain of this storyline is and that makes James Junior even creepier. Jock and Snyder are like Lennon and McCartney in that the marriage of words and pictures from great music. I was thrown by Barbara Gordon being in the book as the only Barbara Gordon I know is Batgirl. Having Gordon’s ex-wife in the story was confusing me for a little while and I thought it was something that needed a little explanation. Plus at one point I was confused as to who was who between Tim and Dick, but I think that was just someone screwing up with the dialogue. Minor hiccups aside I hate that this series is wrapping up with the next issue as it has been one of the best runs done on this book and will be the definitive run of Dick as Batman. 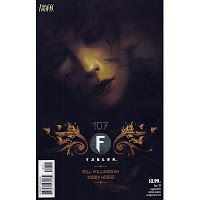 Remember when I said I wondered if Fables would have life after the end of the last arc, well Fables #107 was a thing of beauty and not a beast at all. This issue was all about Briar Rose who had put the Emperor’s capital city to sleep. One of the many want to be new rulers of all the Empire was trying to wake her and a rival had plotted against him. Sleeping beauties, magical kingdoms, trolls and goblins all brought to life by Willingham as writer and Terry (Echo) Moore as artist. Moore’s work is always fantastic and looked even better with Lee Loughridge’s wonderful color work. If Mark Buckingham ever quits Moore would be the perfect replacement, but then we would lose his great independent work. This was a great issue in what arguably the most consistent Vertigo series that has ever been done. Certainly the longest run by any writer on a Vertigo book.

Another terrific book this week was Captain America and Bucky #620 by that Ed (Criminal) Brubaker fellow and Mark Andreyko as writers with Chris (The Mighty Thor) Samnee. With the death of Bucky, I wondered what was going to be done with this book and we got an origin of Bucky. It was a great story chronicling Bucky’s life from a young trouble making kid into becoming a trained military operative who becomes Captain America’s sidekick. All of this material had been scattered about here and there by Ed over his long run on Captain America, but here the entire story was pulled together and present in a straight chronological format. The art by Samnee is so graceful and full of details, yet appears deceptively simple. Samnee is an artist whose abilities as a story teller continue to grow. This was a book worth getting and a great jumping on point for a series.

Uncanny X-Force #12 continues the uninterrupted run of great issues. This issue we are in the “Age of Apocalypse” world with Wolverine, Deadpool, Psylocke and Fantomex. The story moves forward the goal of getting a life seed to defeat the regular MU’s growing menace inside Archangel and setting free Gateway so X-Force can get home. All the great things an alternative universe can give you are present in abundance and we have a lot of play between Wolverine from the regular universe and the Jean Grey of that world. A classic middle chapter in many ways, but it moves the story forward rapidly, builds characterization and gives you plenty of neat moments, like Professor X as a MODOK. Mark Brooks does an excellent job, but his style is the closest to classic super hero artwork which this book has avoided. All in all this is Marvel’s strongest straight super hero book and is by far the best book with an “X” on it.

Flashpoint Project Superman #2 was a very good book, enhanced by the art of Gene Ha. This issue tells us the origin of Kal-El in the Flashpoint world. Here he is captured by the government and being raised as an experiment and in hopes that he maybe a weapon for the US Government. Throughout the story he is a young boy and we see him as a skinny kid deprived of the solar radiation that empowers him. We get great character moments between Kal and General Lane, Kal and a young Lois. All in all this is a great story giving us a Flashpoint origin of Superman. I actually find this version of the character a hundred times more interesting then what is going on in the regular books. Of all the Flashpoint spin offs this is the best.