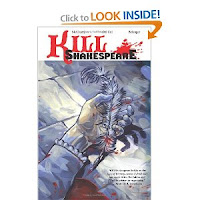 and The Unrwritten so engrossing." - Scott Thill, Wired.com


Now that's a pull quote that's going to get my attention. Fables and The Unwritten are consistently among my favorite reads, so when I saw that quote on the trade, it was a gimme to get, especially at half off. Thus, I didn't entirely immerse myself in thirty year old X-Men stories.

It's an accurate quote, too. Like the two comparison books, it's not necessary to be entirely versed in the referenced literary sources, but having some familiarity provides insight into characters, and sometimes surprises at the directions into which the characters are taken in this story.

The premise is that Hamlet has left Denmark, having failed to avenge 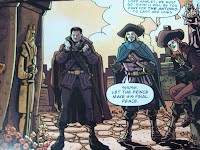 his late father and accidentally killed a friend. Rosencrantz and Guildenstern warn him of a plot to kill him on his arrival in England, of which they were supposed to be a part. The king of England is Richard III. The king of Scotland is MacBeth. What could possibly go wrong for Hamlet, seeking protection from these two? 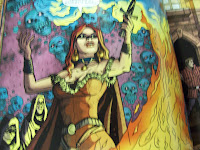 Actually, MacBeth is shortly removed from the picture by Lady MacBeth, who's taken up quarters and alliance with Richard III, 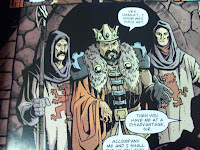 but she's certainly no more trustworthy for Hamlet. Not that our knowledge of the perfidy of these two is known to Hamlet. He's entreated by Richard to locate and kill Shakespeare, a demi-god or wizard of some sort who is making life difficulty for the kingdoms. Hamlet is supposed to be a prophesied saviour who can kill Shakespeare.

Iago is accompanying Hamlet on this mission, and his motivations 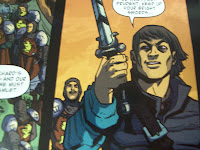 are the most opaque. At various times he seems to be working at the behest of Richard to help Hamlet kill Shakespeare. At others, he seems to be trying to kill Hamlet, or at least prevent the completion of his mission.

Opposing Hamlet's mission are Juliet, Othello, and Falstaff. The back and forth be 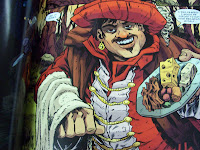 tween these two camps is leading to a lot of death of the civilians. Granted, many of them are following Juliet's group which is 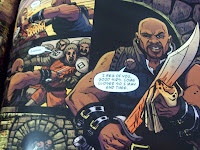 trying to protect Shakespeare. Not sure if it's more fatal to be a villager or a soldier in Richard's army. Both are doing a lot of dying.

Lady MacBeth also has some witchcraft of her own and is working behind Richard's back, of course.

Conor McCreery and Anthony Del Col are the writers of his engaging work. Andy Belanger is the artist. He employs a heavy ink style that reminds me of Locke and Key's art by Gabriel 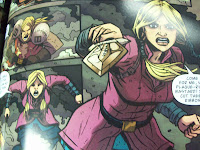 Rodriguez. There's an angularity to the characters that's also similar. Given the dark, mysterious happenings in the story, the art captures the right feeling for the work. My only quibble is the armor worn by Richard's soldiers. They look like they're wearing shoulder pads for an NFL game. 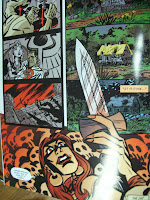 In addition to the single issues reprinted here, there's a bonus story by Owen K. Craig and Curtis Wetman, illustrated by J. Bone, called "Et tu, Hecate". A mysterious woman intervenes in the plot to kill Julius Caesar by convincing Brutus to participate in the conspiracy when he otherwise would not. It's unclear to me how, but this is done in service of destroying Shakespeare. It's a neat trick to bring in a work that doesn't easily mesh with the others, being set in a far removed era from the other stories being used in Kill Shakespeare.

I'm looking forward to further trade collections of the story as it moves along. Now if I can only get it sorted in my brain that it's Kill Shakespeare and not Kill Bill.
Posted by Thomm at Sunday, July 31, 2011