The Week of June 29 Review

On the whole comics have been a little thin on content lately. Not saying stuff is horrible, but just thin. Of course the sad losing streak my Orioles have been in make my mood and a view a little darker, the impending DCU re-launch has caused many DC books to be filler running to artificial endings at times, but I still think in general comics have been off. One thing recently that I have found and enjoyed is a blog by Jim Shooter, who has been around and centrally involved in comics for the last 40 plus years. It is great stuff and probably as accurate an account of the events he was involved in as you will ever see. Click here to check it out.

This week DC swept all the books I want to talk about. Two Flashpoints, two Batman titles and one from Vertigo, Scott Snyder being associated with three of them is not a coincidence regarding their quality. 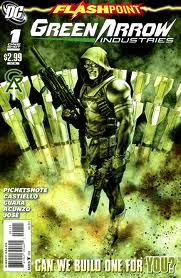 What I Liked – The pace of this Flashpoint stories are terrific. We jump right in and just move forward full steam ahead. Ollie is an arms dealer and is imitating a basketball player by having a lot of kids out of wedlock with various women. His base of operations is attacked and it turns out one of the attackers whom he fights is his daughter. She dies and of course you can see the writing on the wall that Ollie will now change.

What I Didn’t Like – It is pretty generic art and the story has an obvious ending of Ollie becoming the same save the whales Robin Hood character DC has made his for the last 20 years. Boring

Overall – I read a book about Green Arrow I enjoyed. Since it is Flashpoint and you can do anything I would have preferred Ollie just remain the same cavalier bastard he was portrayed as in the start of the book, do something different for these stories like many of the books are doing. I have a feeling the next two issues will be total filler type material. 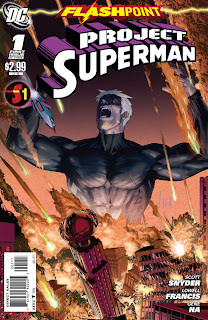 What I Liked – Gene Ha on art. It has been awhile and I miss his work. Certainly not his strongest work, but quality work nonetheless. This was a nice twist on the super man type of story, where the government manufacturers a “Super” man and then fear their own creation. We have seen a lot of great stories about this theme with The Mighty, Irredeemable and others. This story adds a great moment with Kal-El’s rocket ship hitting earth and blowing up Metropolis at the same time as the endpoint of the first part.

What I Didn’t Like – The story almost moved too quickly and therefore I was left wanting more exploration of the breakdown in the relationship of Lt. Sinclair and General Lane.

Overall – An exciting start to a three issue mini-series that with Frankenstein look to be the best of what are for the most part fun books. 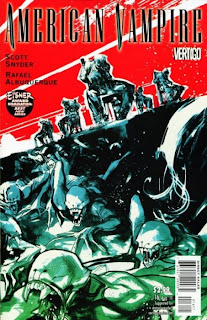 What I Liked – The story just moves and flows so easily. Snyder’s comics are often some of the easiest reads in the business. I also feel like each book could be read by anyone coming into the story and they could pick up the gist of the main story with no problem. Henry making a bargain with Skinner to break out of the Japanese prison camp was great and Pearl coming to the rescue was also very well done. Rafael’s art continues to impress.

What I Didn’t Like – The backup pushing the current Vertigo crime novel causes the feel of the book to be off. I thing I’m coming close to the end and in fact the issue is over.

Overall – This is one of the top ten series on the stands and is consistently a great read and strong art. 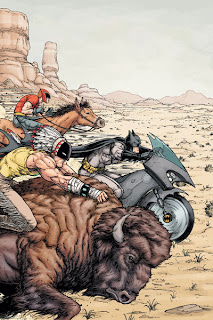 What I Liked – Burnham’s art makes this book so much better, I’m very glad DC has signed him to an exclusive. The Man of Bat’s story was also a good one as we see he is fighting to make his home a better place and his son, who acts as his Robin, wants to fight the big menaces. Bruce is still gathering his troops as Leviathan begins to attack his army.

What I Didn’t Like – Knowing this series is going on hiatus and then coming back as Grant has to incorporate some of the changes from the soft reboot. A good story is a good story and I wish DC just left this book alone. At least it is not being cancelled.

Overall - This is a cool concept, but the pace of it coming together has taken too long. Still I’m enjoying the ride, especially with Burnham on art. 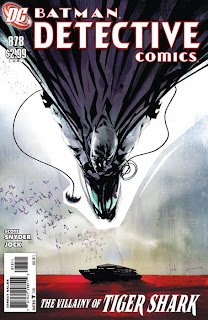 What I Liked – The story, the art.

What I Didn’t Like – That Dick as Batman is ending.

Overall – The best super hero book on the stand. Not a word or panel is wasted. I hear the sales on this book are climbing and that DC planned for Dick to not be Batman for a very long time, but this should be the exception to the rule. Scott has made Dick a unique hero and Jock’s art has made both the fantastic and the creepy work in this book. From jumping out of a Killer Whale’s mouth, to sexual tension with Sonya and to a dismembered person being tortured, every element works. DC has stated they want most of their heroes set back in time so they are not as infallible as they often appear today. With Dick as Batman we have a man who is believable as a hero, yet one not as accomplished as Bruce Wayne. Furthermore allowing characters to age can cause them to be more fallible as time progresses. Still I have been a fan long enough to know that I will enjoy these type of runs when I can and worry about the next book another day.

So I keep looking for a good sign off line and I found this in Gaelic, being half Irish I feel justified, “Go n-ithe an cat thú is go n-ithe an diabhal an cat”. Which translates to “May the cat eat you, and may the cat be eaten by the devil”. It is said to be an Irish curse, I like it.