The Week of July 13 in Review

So this week is a cheat of sorts. Normally I either write this column as I read stuff or write after I have read everything. As I have a small trip planned this weekend – nothing exciting at all believe me – I’m writing this Thursday night after reading about nine books out of a huge stack of books.

A quick comment on the “debt” debate, we will not default on our loans if a new debt ceiling isn’t passed by August 2. We have enough money coming in to pay the debt, just not everything else. I wish that all the politicians would stop playing Chicken Little.

Back to the books, of what I read I like a lot of it, short capsule reviews as once again my time is pressed, one day I hope to have more time. It is interesting to note the six books I’m commenting on are by Scott Snyder, Ed Brubaker, Jonathan Hickman, Jason Aaron and Geoff Johns, good writers with strong art usually equals a good comic. 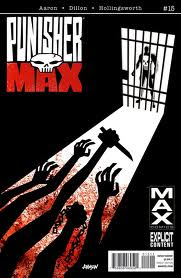 Punishermax #15 is another chapter in the enhanced version of Frank’s journey into becoming the Punisher. While the current storyline is moving slowly as Kingpin is trying to get Frank killed in prison, the past life of Frank is fascinating. Frank is dead inside and he can’t bring himself to talk about it. The mob and Nick Fury are both recruiting him to kill, which is what he apparently does best or perhaps the only thing he knows how to do anymore. This is a great character study about a severely flawed and broken man who has a moral code, but has no way to express himself in a correct way. Killing is what he knows and it appears he will allow his family to be killed so at least he can build a rationale for killing people whom he sees as bad guys. The Punisher is neither a good guy nor a bad guy per say, he is what the world made him. Just great stuff and is shaping as another seminal title for Aaron. 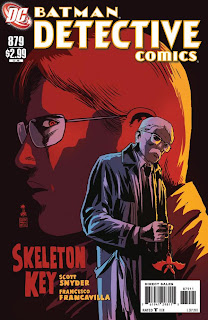 Now someone who is a bad guy with no ifs, ands or buts about it is James Gordon Jr. Scott Snyder with Francesco Francavilla on art give us a full issue of Commissioner James Gordon going after his son and trying to see if he is still a psychotic killer or has he been cured. Detective Comics #879 is another great issue in Snyder’s run on this book. This issue we have Commissioner Gordon investigating his son and finds out he is trying to turn other children into the same type of psychotic he is and at the same time the Joker escapes from Arkham. Snyder’s work is some of the best paced books on the stands and Detective continues to build. I hate that this series is ending, but love this run. Speaking of seminal runs on books Snyder is two for two with American Vampire and his work on Detective. 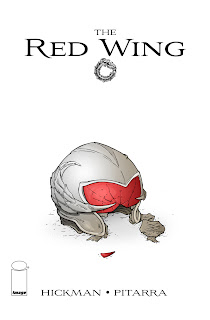 Next up is Jonathan Hickman’s new creator owned series Red Wing #1 (of 4). As with his entire run of creator owned books it has some great concepts and ideas. This book is about time traveling and fighting a war with aliens. In addition we have the story about the son of one of the original “Red Wing” members becoming a member of Red Wing. Red Wing is the unit that flys the time traveling missions and fights the alien bad guys. We also are learning despite the theoretical overwhelming odds against it, the son’s Dad has survived being lost in the past. It has some nice art by Nick Pitarra and is playing with time travel differently and trying to think about time in a different manner. Still like Pavlov’s dog I’m already anticipated this series is written for the last page payoff and all the cool concepts and ideas will never be given their full examination. I keep feeling like too many writers are into the TV series Lost, where cool ideas are never explained because it is just about the cool moment and not enough about telling a story. I’m still sucked in because I like the feeling of the book, but I think I will never get past second base with his work or maybe we have skipped all the foreplay and I’m being f***ed without being kissed since I’m buying his books. 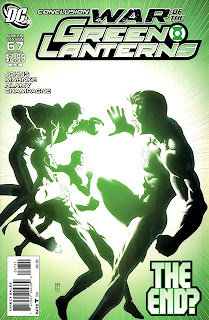 The War of Green Lanterns ended with a bang in Green Lantern #67. First off Doug Mahnke should be given some award as he consistently delivers a monthly book with great art all the time. I love this guy’s work and he does not get the full acclaim he deserves. The story itself was excellent. Hal and his crew defeat Krona at the cost of Krona’s life. The Guardians get pissed off at Hal, strip him of his ring and send him home. At the same time in the midst of all of this Sinestro becomes a Green Lantern again and will be the Green Lantern in the new series starting in September. I love this, I’m tired of Hal and seeing Sinestro back as a GL just opens up reams of material and stories to exam both Sinestro and the history of the GL Corps. What strikes me as funny is this is being done by Johns who has been the DC poster boy for keeping the same person as the hero forever. Johns has handled bringing Hal and Barry back and Didio wants the most known person to remain in the costumes forever. Finally this is being done after the GL movie where theoretically everyone is beating down comic book stores to buy GL comics and it should be Hal Jordan or everyone is confused (so goes the theory). I’m guessing Hal gets a ring sooner rather than later, but I like the potential of where this can go. 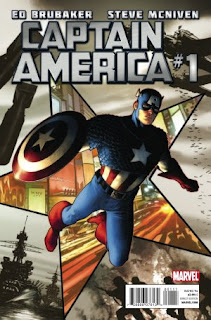 From endings to beginnings we move onto to Captain America #1. Now this is a perfect book for people who saw the movie to walk in to buy a comic about Cap. Ed did a wonderful job in making this book have no real ties to continuity, added in a twist regarding WWII and give us a great opening chapter. Mix in with that Steve McNiven on the art and the book was a great opening. For regular readers it was a little disconcerting as nothing about Fear Itself and nothing about Bucky being dead, but a great opener and a very cool story. Some of the best scenes were seeing Cap jump into action without the uniform and a sequence with his shield that was just mind blowing and beautifully illustrated. The mix with the present story interposed with the current storyline was well done and not confusing or jumbled as a lesser writer may have made it. As long as McNiven can deliver a monthly book this should be another successful re-launch of Captain American. I think this makes three #1 issues under Ed’s tenure, maybe just two. 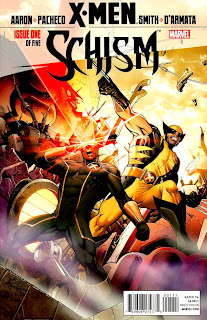 From beginnings we move to the beginnings of the ending with X-Men Schism #1 (of 5). Now I know Prelude was just that, but after reading this issue I realize I totally wasted my money as Prelude had nothing apparently to do with this series. The art by Pacheo was nice, but I see where #2 is by Cho and #3 is by Arcuna, which is fine, but I prefer artistic continuity within a mini-series. The story is rather boring and feels generic X-Menish. Cyclops and Wolverine go out to sell peace love and understanding, Sentinels attack after bad guy mutant screws up stuff and we see the rebirth of the Hellfire Club. Not horrible, just not a great opening act to a series that is supposed to reset the status quo of the X-Men.