I blame Godzilla: Gangsters and Goliaths. No. I blame our LCS owner who’s been praising the works of John Layman. No. I blame myself for not exercising the self-control to put the first volume of CHEW down after reading something really distasteful (to me) – and I’m not talking about the cannibalism. I had no financial investment in the trade as I had picked up the first three at our local library. And to be honest, I had no idea what to expect when I first started reading it either. The fact that story was so interesting, the pacing so brilliant, and parts were so funny – Well, it helped me rationalize away the foul language enough for me to devour all three volumes over the Fourth of July weekend. But the aftertaste…was not pleasant. 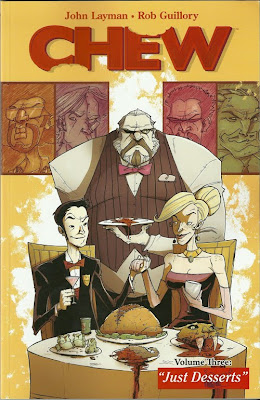 For the uninitiated like I was, here’s a quick recap of the CHEW series published by Image Comics: It’s written by John Layman and illustrated very stylistically by Rob Guillory. The art fits the story perfectly as much of the humor comes from the facial expressions of the characters. The story stars Tony Chu, who is a Cibopath. This means he can get psychic readings from the things he eats. While Tony prefers to eat Beets, which give off no reading, he usually has to eat lots of gross things, such as dead people. This helps him in his job as a FDA agent tracking down killers and people involved in the illegal chicken trade. See, thanks to the bird flu that killed millions all poultry products are now outlawed. Many people believe this is all a government conspiracy and that something else caused those people’s deaths.

Tony has a girlfriend, Amelia Mintz, who is a Saboscrivner. This means she can write about food so well that when you read it or hear her talk about it, you can experience the taste of the food. She’s a great asset to Tony in many ways, but he can actually enjoy the experience of eating without the complications of his “special” gift when she’s around. Tony has a partner, John Colby, who is a cyborg now after getting brained by a meat cleaver and an ex-partner, Mason Savoy, who is a Cibopath like him and a murderer (hence the “ex”-ness). Tony’s FDA boss, Mike Applebee, hates his guts and tries to make his life miserable by giving him the worst cases that will often lead Tony to ingest the most disgusting things. There’s also a faux-vampire, a weird alien fruit that when cooked tastes just like chicken, Tony’s iron-chef brother, his twin-sister, and his daughter. Oh, there are more characters then that running around, but that should be enough to give you a taste. 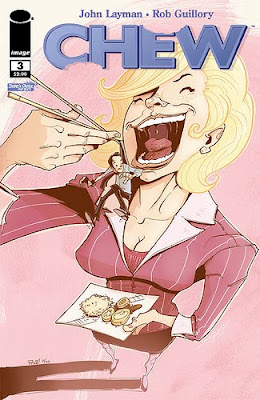 If you’ve never heard of some of those terms before, you’re not alone. Layman just made them up, but the amazing thing is how easily it is to accept them. This is the beauty of Layman’s writing, his ability to matter-of-factly state something (which can be totally outlandish), and the reader immediately suspends their disbelief and are sucked into the story (I wonder what he would call that?). He also wastes NO time. Just when you start to have questions, he explains something and you move right along. Comic readers often complain about stuff not happening in their books, but in CHEW unexpected stuff happens ALL the time. It bears repeating: the pacing is brilliant. Not only is Layman the writer, he’s also the letterer, which I think is really cool. What an awesome way to contribute to the look of the book (and make last minute edits on the fly).

After such glowing praise, why can’t I recommend the series? Well, the language is too much for me. CHEW obviously pays homage to Quentin Tarantino films, with its extreme violence and vocabulary (Book 2 chapter 3 or issue 8 had two covers parodying QT’s films.) So, I understand why Layman is using so many “colorful metaphors”, but something about reading a word sticks in my head more than hearing the word. I tried several approaches to bypass this “problem”. One option was to skim some of the dialogue. It worked to some degree, but it upset the flow of the story. Another option was to substitute the “bad” words with something else inspired from the book itself. No, I didn’t use “Fricken”, which refers to a genetically altered Frog with Chicken DNA. It wouldn’t have been broad enough anyway, because it wasn’t only F-words that I wanted to replace. I ended up using “CHEW”, which I thought was fittingly ironic. There’s one hilarious part of the story, where Tony’s boss makes him eat a “ripe” finger (when there was already DNA evidence) and calls him “Agent finger Chu-er”. This actually was fairly effective. Instead of labeling somebody with as an “M-F”, you could say “Mother Chewer”, which relates to the detestable cannibalism practices in the book. I’d say they’re about on par with each other if you took the meaning literally. 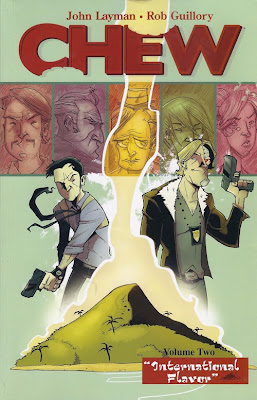 Alas, even that solution did not prevent the overloading of my brain with all these angry words. I’m convinced that after having a nearly perfect day off last Friday, my post-nap mood was significantly more sour due to having read CHEW before catching some Z's. We all struggle with anger, but we don’t always act on it. Filling my mind with such “junk” is like holding a loaded handgun. You’re more likely to “pop off” if you’ve got the tools at your disposal. It probably took a good 24-hours after finishing the last volume before my thoughts were sufficiently clutter free. I honestly don’t know how people can go around with so much negativity in their heads all the time. Whenever the eventual CHEW HC series collecting the planned 60-issue run is published, I hope the pages are thick enough to take some Sharpie edits without bleeding through!

A great read, but not for me. You know I think the IMAGE “i” icon is actually an upside down exclamation point. Most of their books are harsher on language than I’d like. :(
Posted by Matthew at Saturday, July 30, 2011