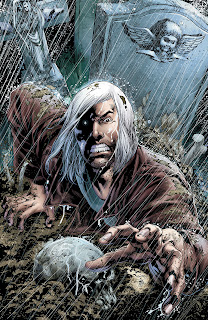 RESURRECTION MAN #1
Written by DAN ABNETT and ANDY LANNING
Art by FERNANDO DAGNINO
Cover by IVAN REIS and JOE PRADO
On sale SEPTEMBER 14 • 32 pg, FC, $2.99 US • RATED T+
It’s the return of Mitch Shelly – and he’s still dead.
Resurrection Man can’t stay dead for long, though – and with each rebirth comes new and unexpected powers. But his many returns have not gone unnoticed, and forces are gathering to learn what’s so special about him – and to see which of them will finally stop Resurrection Man dead.

Jim: This one was a shocker. The original series was well done and now I want to re-read it, but I was never expecting the book to get a revival. Abnett and Lanning remind me of Chuck Dixon in that they work for any publisher and always deliver a well told story. They have a few misses, but also very few over powering hits. The term professional comes to mind for these guys and normally rock solid entertainment. Their Legion work and the War of Kings from Marvel is my favorite from them off the top of my head. This is another book I’m looking forward to reading.
Gwen: I honestly don't know much about this character but the solicitation makes it seem like the poor guy is just going to keep dying and dying - I wonder - does he ever off himself because he needs a new power set?
Thomm: I've never read any stories with this guy but I like the premise.
Greg: One of DC's better books from the 90's and proof that DnA have been around for a shockingly long amount of time. Really looking forward to this one. 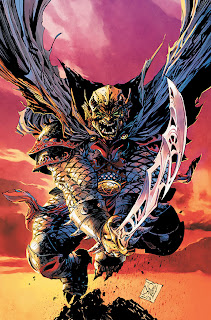 DEMON KNIGHTS #1
Written by PAUL CORNELL
Art by DIOGENES NEVES and OCLAIR ALBERT
Cover by TONY S. DANIEL
On sale SEPTEMBER 14 • 32 pg, FC, $2.99 US • RATED T
Set in the Dark Ages of the DC Universe, a barbarian horde is massing to crush civilization. It’s fallen to Madame Xanadu and Jason Blood, the man with a monster inside him, to stand in their way – though the demon Etrigan has no interest in protecting anyone or anything other than himself! It’ll take more than their own power to stop an army fueled by bloodlust and dark sorcery, and some very surprising heroes – and villains – will have no choice but to join the fray!

Paul Cornell talks to the press, Etrigan will clean up the mess.

Jim: The further DC gets away from safe, the more I love the selections. Paul Cornell doing a Demon series is a gamble that seems like a win to me. Paul excels at the odd and strange and the Demon fits that bill. Now Paul's Knight & Squire turned me off and his wrap up of the Doomsday story has not impressed, but his Luthor story was great and he is a solid writer. I’m not sure if this will be a hit, but I will check it out.
Gwen: I really loved the Madame Xanadu series - so hopefully this will be a chance to see more of her character - in a good way - I hope.
Lee: I have loved the Demon since Ennis wrote him in the 90's. This is another series that I am looking forward to.
Matthew: Does that mean you loved John Byrne's Blood of the Demon series, Lee? If so, then you and I were the only ones who did. I've always liked the character. Maybe I can get on Jim's hand-me-down distribution list? I couldn't afford a fourth of all these new titles!
Thomm: Well, maybe this will make the premature end of Madame Xanadu less bitter. Probably not, but we'll see.
Greg: Never particularly cared about the Demon, but I've always got time for Paul Cornell. 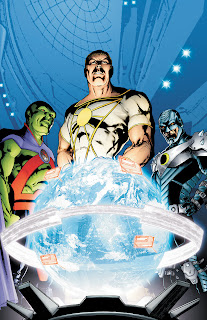 STORMWATCH #1
Written by PAUL CORNELL
Art and cover by MIGUEL SEPULVEDA
On sale SEPTEMBER 7 • 32 pg, FC, $2.99 US • RATED T+
They are Stormwatch, a dangerous super human police force whose existence is kept secret from the world Directly following the ominous events of SUPERMAN #1, Adam One leads half the Stormwatch team to recover the [INFORMATION REDACTED] from deep in the Himalayas. Meanwhile, Jack Hawksmoor and the rest of the Stormwatch crew look to recruit two of the deadliest super humans on the planet: Midnighter and Apollo! And if they say no? Perhaps the Martian Manhunter can change their minds...

Paul Cornell talks about being in charge of Stormwatch.

Jim: So Wildstorm makes its merger into the DCU. This book is one I’m very curious about. Plus the touch of adding the Martian Manhunter into the mix is just damn odd. I have no clue how DC will integrate these heroes inside the DCU as it has taken years to make the Charlton characters to be a real part of the DCU, but DC has history of absorbing characters. Heck Fawcett characters, Milestone and I believe the Archie heroes are all owned or leased out to DC in some shape or form.
Gwen: I really never liked the Stormwatch characters. I have a really hard time imagining Martian Manhunter working with them - it just doesn't seem to fit.
Lee: I'm hoping for the best but expecting the worst. What made Wildstorm unique was the fact that it was outside of the DCU. Having the Manhunter as part of the team makes me think of this as... well... Extreme Justice.
Thomm: No interest at all in this.
Greg: Like Lee, I'm skeptical of whether or not Wildstorm can be integrated into the DCU, but if there's anyone who can do it, its Cornell. Probably worth a look at least. VOODOO #1
Written by RON MARZ
Art and cover by SAMI BASRI
On sale SEPTEMBER 28 • 32 pg, FC, $2.99 US • RATED T+
Who is Voodoo? Is she hero, villain – or both? Learn the truth about Priscilla Kitaen as she leaves a trail of violence across America. Discover the new DCU through her eyes, because the things she sees are not always what they seem…

Jim: This book is a tabula rasa for me. I know very little about Voodoo and Ron Marz is a name I know, but nothing he has written jumps to my mind. I’m curious about this title, but hope it is more of an origin story so I can get to know the character. Sami's art should at least keep the booking looking good.
Gwen: I'm all for a new character to focus on! I love new characters :) New characters mean fresh new and shiny stories. At least that's what I hope it means.
Thomm: A POV character for the new DCU is a good idea.
Matthew: How about Emerald Twilight and the introduction of Kyle Rayner, Jim! Unless this is some other Ron Marz. You probably meant, "recently". 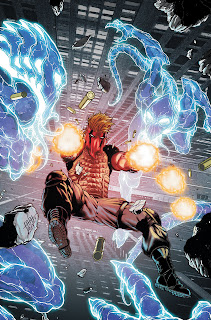 GRIFTER #1
Written by NATHAN EDMONDSON
Art by CAFU
Cover by CAFU and BIT
On sale SEPTEMBER 14 • 32 pg, FC, $2.99 US • RATED T
The DCU’s most wanted man stars in his own series!
Cole Cash is a charming grifter few can resist. And yet he’s about to be branded a serial killer when he begins hunting and exterminating inhuman creatures hidden in human form – creatures only he can see!
Can the biggest sweet talker of all time talk his way out of this one when even his brother thinks he’s gone over the edge?

Nathan talks about Who is Jake Ellis.

Jim: Now Grifter I have a little bit of a handle on, but seeing Nathan Edmondson’s name on the credits and CAFU as the artist gives me high hopes for this book. CAFU is an up and coming artist star and Edmondson is just starting to get noticed with some work out of Image. His “Who is Jake Ellis” book bodes well for capturing the type of vibe the solicitation is giving me. Plus I love new voices coming into the DCU.
Gwen: Again - I could care less about Wildstorm characters.
Matthew: Sounds a bit like ROM and the Dire Wraiths (disguised as humans), only without the cool space armor.
Thomm: Reminds me of an Image book whose name I can't recall but featured a guy killing demons that only he could see.
Greg: Killer of Demons! That book was great. Probably better than this.

Part 9 – I can see the end of this thing, why did I decide to remark on every book!

Lee: That is a great question! I think you did it to torture all of us...
Matthew: Perhaps, the 401K contribution DC recently gave you? Just kidding folks, we're not politicians, we're above bribery.
Thomm: Not being offered is not the same as being above.
Posted by Jim at Thursday, July 07, 2011