So, I'm into the next volume that I picked up at half price, and it's collecing Uncanny X-Men 101-110. As Matthew said in his comment on my last post, this one's even better than the initial relaunch of the X-Men. 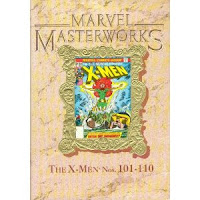 Of course, that cover showing the birth of Phoenix should be a good sign of things to come, and it is. These stories run from that birth, through battles with Black Tom Cassidy and Juggernaut, the return of Magneto, the introduction of the Shi'ar Empire, and the first appearance of Weapon Alpha. The only "eh" point was 110 when Warhawk took over the Danger Room and used it to attack the team.

Claremont, Cockrum, and for issues 108 and 109, John Byrne, brought a lot of new to the table. Phoenix saves the universe from the insanity of the Shi'ar emporer, brother of Lilandra. That's one of the great flashbacks I was constantly seeing in later issues I had read, but it was a lot of fun to read the entire story. There's no dual personality issue with Jean Grey and the Phoenix Force at this point. In fact, as far as anyone reading this (and I think writing it) knows, Jean Grey and the Phoenix are one and the same.

I think the best and most significant addition to the X-Men was the Shi'ar Empire. It not only played around with an alien team reminiscent of DC's LOSH, but also opened up potential for a lot of good stories and the return of Cyclops's father.

Beyond the telling of the stories, I liked the Byrne art much better than the Cockrum art. Cockrum wasn't bad, but it was a bit heavy at times, while Byrne was more fluid and precise. The change in artist brought about a bit of humor at the end of issue 108, where teh book concluded with a dedication to Cockrum. Cockrum, in turn, added "I'm not dead". Good thing, because the dedication wasn't too clear on that.

Gotta say I don't quite get how Xavier goes from agonizing pain caused by his mental connection to Lilandra to eternal love for the woman, but that's comics for you. At least the relationship between Moira MacTaggert and Sean Cassidy took a more normal progression.