Well, it's supposed to be The List today, but it's another short turn-around from the last

Wednesday to the first Sunday, and on top of that I have jury duty on June 30, so The List will have to wait a week. I know, you're heartbroken, but the love will return.

Instead, I'll talk about this classic two issue story from 1980-1981. Being in rural PA I was dependent on luck in finding comics at convenience stores if I didn't get a subscription. Back then I was mostly reading Amazing Spider-man and The Incredible Hulk, but on the advice of the only other known comic book reader in sixth grade, I got a subscription to Uncanny X-Men. My subscription started with issue 143, though, so I later worked backward to get these two issues, entitled "Days of Future Past", and some others going back a couple years (which I'll look at later).

As I mentioned in another posting, for me this was the start of all the dystopian future stories that have since become predominant in super hero comics. Too bad most have not lived up to its standard.

The story is nicely straightforward, which is hard to believe about an X-Men story now. Kitty Pryde, all of 13 and just recently arrived for training with the X-Men, has a crush on Colossus, is afraid of Nightcrawler's appearance, and is a sort of surrogate child for both Wolverine and Storm. Angel's on the team at this point, too, but doesn't seem to have much of a relationship with Kitty. Cyclops is off the team at the moment, mourning the death (the first time) of Jean Grey. (Scott's preferred method of mourning Jean seems to be to hook up with either a woman who looks just like Jean or a woman who has the same sort of powers. What's the attraction these women have for him?) 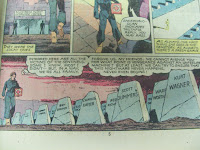 Kate Pryde, 30 years later, is married to Colossus and imprisoned 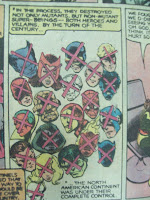 in an internment camp in the remains of NYC. Sentinels run the US and have killed off most of the super powered within the US (and maybe Canada). Among the dead are the Fantastic Four, Spider-man, the Hulk, Angel, Cyclops, Nightcrawler, Banshee, Iceman, and Beast. In fact, the only remaining X-Men are Storm, Kate, Colossus and Wolverine, the last of who is not imprisoned but fighting with a Canadian underground against the Sentinels. Joining these survivors are two new characters, Franklin Richards (son of Reed and Sue) and Rachel, a telepath. The story never indicates what powers Franklin has.

With the aid of some device and some meditation, Rachel is able to send the mind of Kate back to 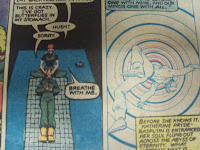 Halloween 1980 and exchange her consciousness with that of Kate's 13 year old self. The plan is for the adult Kate to prevent the assassination of Senator Robert Kelly, who's running for president and has an anti-mutant platform. 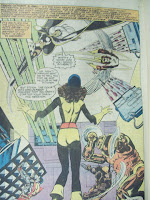 The section set in 1980 starts with some traditional Danger Room action before moving into the larger story. This segment brings out, in short order, the personalities and nature of the releationships of the various characters. It's quite light hearted and fun, danger caused by Kitty's entry notwithstanding. At the end of the Danger Room scene Kate enters the mind of Kitty.

The assassins are the New Brotherhood of Evil Mutants (Mystique, Destiny, Pyro, Avalanche, and the Blob), but Kate doesn't know which one actually killed Kelly. His death leads to passage of anti-mutant legislation that eventually leads to the rise of the Sentinels and the holocaust of the super powered. Curiously, it's not the holocaust in the US that's the reason the future X-Men are trying to change their own history. It's that the Sentinels are about to take their crusade global and the other nuclear powers are prepared to nuke the US in response.

Kate and Peter (Colossus) are afraid of the mission because it might mean they never marry, but 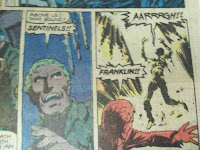 decide it's worth the risk, what with the Sentinels having killed most of their friends and all of their children. While Kate is in the past, successfully stopping Kelly from being assassinated (while also keeping Professor X and Moira MacTaggart from being killed), Wolverine, Colossus, and Storm are fighting Sentinels. I'm not clear on why. I think it's a diversion. Anyway, Franklin gets shredded/blasted before any powers are exhibited and Rachel is left to mind Kate's comatose body while Storm, Colossus and Wolverine are killed fighting Sentinels. 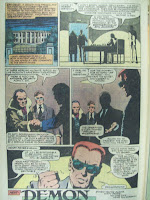 In the end, its uncertain if the mission was actually successful. For one thing, the reader doesn't know if the prevented assassination changed the future for Kate or just created an alternate time line. For another, Kelly and Sebastian Shaw still put in motion an effort to revive the Sentinels without legislation (and via a weirdly clandestine manner that doesn't have much to do with the way the US government is structured).

I love this story, and not just for nostalgia's sake. Sure, it has much of the awkward exposition of the time that required characters to continuously think in narrative form about what they were doing, but most of the conversations and even more of the narrative captions are very well structured. Of course, this was the heydey of Claremont and Byrne working on X-Men.

I also like that no time was wasted with having the X-Men not believe Kate Pryde when she inhabited the body of her younger self. They had doubts but they didn't dicker and engage in artificial delays. They went straight from their HQ to DC to try to prevent the assassination.

This also marked the first appearance of the New Brotherhood of Evil Mutants, certainly one of the best team names in the history of super hero comics. Of course, any team that puts Evil in its name has a leg up on everyone else. 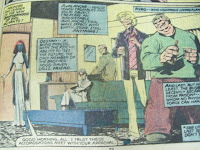 Byrne's depiction of different body types for different characters was nice to see again. Kitty looked like a 13 year old, but beyond that Pyro was very thin, Avalanche muscular, and the Blob his usual obese self. Only Storm and Mystique really shared similar body types.

Of course, as with most stories, there's nitpicking to be had if so desired. It's unlikely a US 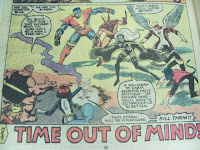 Senator, who's not even senior on the committee in question, would be allowed to call hearings on a campaign issue just days 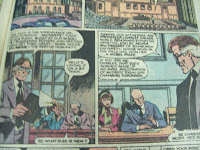 before the presidential election. I'm never clear on how Rachel's psychic abilities were supposed to combine with a machine to allow some time travel of a person's consciousness, and even less clear on how the adult Kate was able to bring herself back to her present when the mission was over. I wonder why someone chose to use "slain" instead of "dead" or "deceased" on the wanted poster on the cover of 141, but I suppose the same could be said about "apprehended" instead of "captured". Slain and apprehended seem to me a bit pretentious for a wanted poster.

What I really liked about this, and which is more clear in hindsight, was that there really was change going on all the time in this title. Kitty was a new member. She was just a kid with a lot of growth, physical, mental and emotional, ahead of her. The other X-Men had just suffered a loss that, in those days, seemed like a "real" death. In fact, Jean Grey stayed dead about 7 years, which is an eternity by today's expected revivals. There were new villains all the time, this time being the reconstituted Brotherhood as well as Sen. Kelly. Future Magneto is depicted working with the remaining X-Men, a hint of things that would eventually come and go in the book's current setting and represented a humanizing of Magneto.

Best of all, the story showed possible future deaths for these much loved characters. Wolverine's 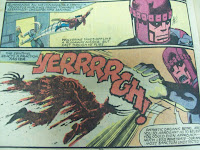 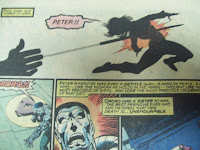 death, in particular, was something to see, especially compared with his near immortality now. (He has grey at the temples, which seems silly now with his history supposed include having been born before the Civil War. Why go grey in 30 years if he hadn't gone grey in over 100?) The way things have developed with Wolverine it's unlikely his flesh being flayed from his bones would kill him, no matter that it should.

There are many personality developments with the characters that are mentioned by their future selves. Storm and Colossus becoming reluctant killers. Kitty getting over her fear of Nightcrawler.

It's inevitable that a corporate owned property would go back to that well, but I would have liked it if that future had just been left alone at that point. It would have remained a more coherent and enjoyable experience if this limited appearance was all there was. Or, a separate story line could have been developed for that world's stories, distinct and apart from the ongoing X-Men stories, much like the Ultimate universe eventually became.

Well, I get to keep my joy with this story by ignoring all the later convolutions that serve no more purpose than a moue on my face.
Posted by Thomm at Sunday, July 03, 2011